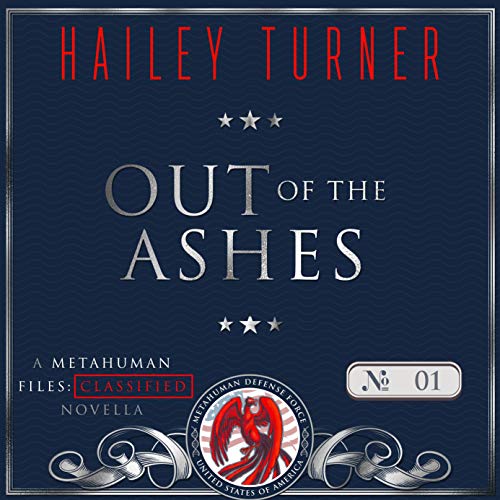 Out of the Ashes

Written by: Hailey Turner
Narrated by: Greg Boudreaux
Try for $0.00

War never leaves a soldier behind.

Staff Sergeant Alexei Dvorkin is still healing from his brief stint as a prisoner of war. While his physical wounds have mended, the emotional scars left behind are slow to disappear. Eager to prove his resilience in the face of lingering trauma, Alexei is determined to complete his first mission in three months and get back into the field - but he’s not forging ahead without his lover.

Agent Sean Delaney’s recovery from trauma is more slow going than he would like, but he pushes through in order to return to active duty and not be left behind. But every decision he makes leaves him feeling like he’s gone two steps forward and one step back when it comes to Alexei. The guilt Sean feels from what they both endured still colors his interactions with the man he loves. Trying to overcome it is difficult and exhausting, making Sean question his place in Alexei’s heart.

Holding on is the hardest thing to do.

The ties between Alexei and Sean were frayed by the enemy’s hand. Mending what’s been broken between them will require a depth of honesty neither man is ready to face just yet. But if they don’t, they risk losing a future together neither wants to let go.

Out of the Ashes is a 28,000 word novella that follows directly after In the Blood in my Metahuman Files series and builds off of events in that book. It is recommended that you listen to In the Blood first before listening to Out of the Ashes. There are explicit intimate scenes that are not suitable for listeners under the age of 18 within the novella.

What listeners say about Out of the Ashes

yay for the novellas!

I admit it, I have a soft spot for Sean and Alexei and the literal torture that Hailey put them through in In The Blood needed a happy ending. And she delivered in patented Hailey style, complete with a mission, jealous Alexei and Sean at various points, car chases, bullets flying and Alexei getting to punch someone in the face. Is Most Best.

And listening toGreg narrate made it that much better.

A story of compassion and love!

This was a spectacular edition to the series.
I liked getting into the minds of Sean and Alexei. I loved that we get more of them in this spinoff.
I loved listening to this action packed gem.
Greg Boudreaux did an amazing audio delivery for this one.

A much needed addition to the series

I love the Metahuman series and I always felt that between In the Blood and In the Requiem not much attention was given to the aftermath of what Sean and Alexei went through. Thankfully this novella was written to give us a feel of the mind space of Alexei and Sean. The POV is for the bigger part Sean's, since his torture was mostly psychological, except the dental work, thus having a bigger impact on his psyche and more to work through. I wish that Alexei's state of mind wasn't summed up in "he's trained to overcome things like that" and it's the reason I'm giving the story 3 stars. Alexei's POV mostly entails his desire to help Sean and be there for him no matter what. Greg's always a joy to listen to, various voices, accents and emotions! His Alexei is especially delicious!!!

I received an ARC from Gay Romance Reviews and this is my honest review.

This was a shorter novella but after everything that happened in the last book, I am so glad to see Sean and Alexei work through all of the traumatic aftermath.

An absolute MUST read!

This novella blew me away! I am so in love with Alexei and Sean's characters. Watching them struggle and over come such horrors is honestly breathtaking and empowering. This couple gives me strength and I will always want more of them. They take each hurtle in stride and it warms my heart to see how they claw out of themselves to move on and come back together where they can go forward hand in hand. This novella is heart wrenching and emotion filled. I loved every moment. As always, masterfully read by Greg Boudreaux 👏👏👏👏 Five stars! ⭐️⭐️⭐️⭐️⭐️

A continuing story in the meta human world focusing on overcoming the severe physical and psychological trauma caused when one heroic couple was kidnapped and tortured. If you haven’t read the previous stories, you won’t be as personally invested in the main characters and won’t have read the actual kidnapping story. The ugly side of survival and PTSD is written with the view towards reconciliation and a hopeful outlook. Healing, not healed. Recovering, not cured. Gentle, steadfast love holding pieces together until it feels ok to let actual arms hold each other. Of course there is action and adventure, but this novella focuses mainly on the mental, physical, and emotional hurdles of our beloved heroes. I personally hate novellas because they’re usually not substantial enough for me to enjoy, but I HIGHLY recommend this one! Greg Boudreaux is fabulous as always- Russian, several British and American accents, perfect pitch, inflection, and timing create a movie in your mind as the story unfolds. This novella is heartbreakingly beautiful.

This is the first book in The Metahuman Files: Classified Series. Although it is a shorter book that bridges book 4 and book 5 of the Metahuman Files Series. So, it is really Book 4.5. And you really do need to read the previous books especially book 4 In the Blood. They are totally worth reading and you will understand Out of the Ashes better for it. A sensational book the writing was amazing. The plot was entertaining and it was steady throughout the book. I found the story and characters wonderful. The characters were well developed and thought out. This book focuses on Sean and Alexei as the MC’s of this book and their healing and continuing with life from book 4. There was humor, argument, mission, London, training, psychiatrist, support, frustration and so much more in this book.

Here is a quote from the book, “Sitting up, Alexei leaned over and carefully lifted Sean’s hand to his mouth, brushing his lips over warm knuckles. “Ya tebya lyublyu,” Alexei whispered. It felt more like a confession now than at any time before when they’d said the words to each other. He still meant them with every fiber of his being.”. There is more but you will need to read the book which I can highly recommend this book and the series. The narration was wonderful not monotone and used different voices for the characters. I voluntarily read an advance copy of this book for an honest review.

A really lovely addition to “In the Blood” book! I’m extremely gratified to get more of Sean and Alexi. “In the Blood” was full of actions and thrilling excitements. Although I loved it, I felt like I didn’t get enough of these two MCs so I’m very happy to get this shortie.

Sean has major guilt when it comes to Alexi. And he still has nightmares which he dreamt about hurting Alexi and it seriously brought a rift and so much tension between their relationship. It was so fulfilling to see him pull out of this pit himself and our men went on a mission together again. It wouldn’t be Hailey Turner if there isn’t a little bit of excitement. Loved it.

narration excellent as always, Hailey is the most incredible world builder. I love the depth of the characters. excellent story

Loved this additional novella in the Metahuman series from Hailey Turner! Greg Boudreax is phenomenal as the narrator,.as usual! Well worth the money!

Alexi and Sean’s story was one well needed to be told so we could get closure... the narration was great and mad me enjoy the story that much more...