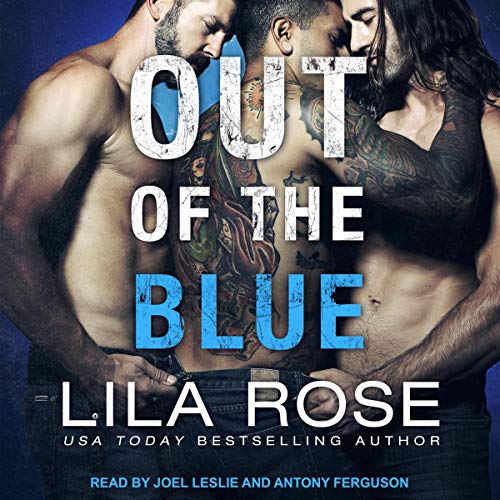 Out of the Blue

At 40, Lan Davis is looking for his damned picket fence and two point five kids. What he doesn't expect is instead of a wife in the picture, his mind keeps conjuring up images of two men. One, his partner in the force, who is as straight as they came, the other an ex, who he'd hurt but never forgot.

After an incident leaves Lan injured, the two men rally around him...only maybe they shouldn't have. It seems a medicated Lan is a truthful one.

Parker Wilding is pissed at the world. His anger builds when his partner refuses medical care after an attack. Instead, Lan entrusts his neighbor to take care of him - a guy Parker doesn't trust. While he's aware they share a history, when the past is revealed, the truth shocks the hell out of him.

Being emotionally crushed ten years ago, Easton Ravel hoped he would never have to see the man who broke him again. Hope is a fickle bitch. And now he's not sure how to handle being face-to-face with the man he once loved. Add in the mix the annoying, testy Parker, and Easton finds his limits are pushed.

Just not in the way he thought they would be.

What happens next sure does come out of the blue.

What listeners say about Out of the Blue

One of my favorites!

When I read the book, years ago, I fell in love with the story. I enjoyed the other Hawks MC books but this one got me in all the feels and I had reread it many times...until I heard the audio version and now I'm hooked on it!
I still love the story but hearing Easton, Lan, and Parker...those accents...it is amazing! The narrators do a great job actually acting put the story, not just reading it.
You cant go wrong with this one but be prepared to not want to stop!!

I truly enjoyed this story. I liked the characters and the way the various plot points seemed to flow without feeling too forced. It was a fun ride.

I’m always a little nervous with threesomes because I worry about jealously and how the third deals when left out. I didn’t have that problem and the low angst made this book great. Very hot sexy times with a great story. Antony and Joel knock it out of the park as usual.

First book that I've read / listened to from Lila Rose. Enjoyed it a lot. Didn't realize that this story had other books ahead of it. Now I will go back and read the other stories. Joel Leslie is one of my favorite narrators. I appreciated Antony Ferguson's narration as well. His deeper voice complimented Joel Leslie's voice well.

I'll be reading more from this author! Awesome storyline and romance.

I was pleasantly pleased.

Great story i am so glad Parker and lan found their happy everafter. I love Lila Rose books they are all great stories.

This is one of only two books out of maybe a hundred that I've listened to and requested a refund. Ugh, like another reviewer, I only got about a quarter of the way through it and realized that nothing was going to make this worth listening to. For starters, I don't get why authors have two narrators if the chapters aren't CLEARLY voiced as one or the other. Actually, there should be three main characters but there are two narrators. I can't even remember who the other one was, because if you are lucky enough to hire Joel Leslie, HAVE HIM READ EVERYTHING. Have him read the phone book. Why give chapters to a less-accomplished narrator? Joel has an enormous range of characters and expressions. I didn't like how the other narrator portrayed the same people we heard just a chapter before.

Also commented before, and not really a spoiler is that the two cop characters are fully in a motorcycle club, breaking laws as they see fit. I get that not all cops are honest, but this just seemed like a stretch to believe, not logical with their characters. Also a stretch to believe is the attitudes of the MC members towards homosexuality.

The biggest complaint from me is that I felt like this was a YA novel. There is so much navel-gazing and "does he really like me?" by these supposed cop/motorcycle gang members, it got to be laughable. My teenage daughter has less angst. It was like any plot was just the sprinkles on the cake of thoughts and feelings. Maybe it gets better, I'll never know. I couldn't force myself to listen to it.

Story and narration were spot on. Recommend!

I loved it! Loved it a loop much, I binged listened to it! Had to give up last night.....my eyes kept closing down, but first thing this morning, had to get my Parker fix! Even now, I miss these characters! It was HOT, sexy and heartfelt! A great listen and read that is hard to put down! So far, the best M/M/M story I have ever read and I can't wait to re-read it again!

Loved the story line. Hot sex scenes. Romance. Love. HEA. Wished there had been 3 narrators since there were 3 characters. It was weird that one narrator spoke for two men.

Also I wished I had known that there were books before this one. I get that it can be read as a stand-alone. Just a heads up would have been good.

omg this story was amazing

Not to my taste

I’m not quite sure how I missed that this book is about an MC, which I can take or leave, but it’s about cops who secretly belong to an MC which makes them complicit is breaking the law, rather than upholding it. Granted in our current dystopia, this might make them more aligned with justice so it could work out for some readers but I couldn’t do it. Also, one narrator spoke in a whiny tone that grated on my nerves. I made it to about chapter 4 and tapped out.