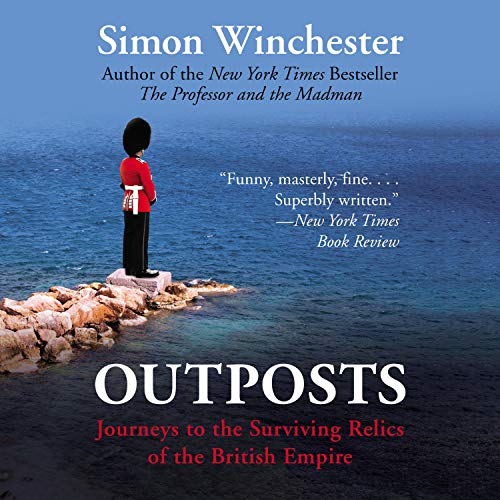 Originally published in 1985, Outposts is Simon Winchester's journey to find the vanishing empire, "on which the sun never sets". In the course of a three-year, 100,000 mile journey - from the chill of the Antarctic to the blue seas of the Caribbean, from the South of Spain and the tip of China to the utterly remote specks in the middle of gale-swept oceans - he discovered such romance and depravity, opulence and despair that he was inspired to write what may be the last contemporary account of the British empire.

Written with Winchester's captivating style and breadth, here are conversations and anecdotes, myths and political analysis, scenery and history - a poignant and colorful record of the lingering beat of what was once the heart of the civilized world.

What listeners say about Outposts

SW is always a treat!!! Can listen to him forever

Listened to it three times already.
Love him as an author and geographer!
will buy them all

I've enjoyed many of Winchester's narrative histories (and am currently listenting to "A Crack at the Edge of the World"), but found this travelogue an equally diverting listen, if a little short on truly useful information, as I doubt I'll ever have the time or money to visit these remote remnants of the British Empire. My one regret is that the book is only available on audio in abridged format (the author explains why this choice was made and how he elected which chapters to eliminate). The narration is excellent.

I wish it was longer!

My first exposure to Simon Winchester and I look forward to much more. He mentions in the introduction that he was required to edit the audio version, which is unfortunate as I would have liked to hear more. Wonderful blend of interesting facts, anecdote, and biting political commentary.

Winchester does it again! He brings his colorful descriptions of the history and geology of Great Britain's distant appendages. Author's interview at the end of the book is extra special.

I thought I would really enjoy this book, but ended up feeling rather sad in the end. The book is well written and well read, but incredibly disheartening. It seems Britain has managed to hold these leftovers of empire in a state of benevolent neglect which is shameful.

Well, I just adore Simon Winchester. This was, comparably speaking, lighter fare. None the less, engaging, informative and nicely written. I read Atlantic before this which is far more mind blowing but this was a nice sort of coda to that.

I'd still listen to anything he's written

Well, this is an earlier work, and every successful author appears to dig up some early work of lesser quality. Nevertheless, there were some interesting passages in his turn 'round the remains of the British empire. Still, I wish that he had gone to Ascension Island.

Good book, chapters are off

I read the print version of this book and loved it.
The audio version is well read by the author.
However, it is abridged; with a sample of another book by Winchester at the end. Why abridge it, and then add something from another book?
Also, the chapters are off. They break in the middle of a chapter. Seems easy to fix...

Wish it were unabridged

Another great Simon Winchester book read by the author. Some chapters were omitted. Still a worthwhile listening experience

This popped up on my screen in the middle of listening to another book and i could not exit.

too short. should of been unabridged!

abridgement is a crime. especially for this author. I felt robbed. I want the whole book. Why was the audio book abridged?!