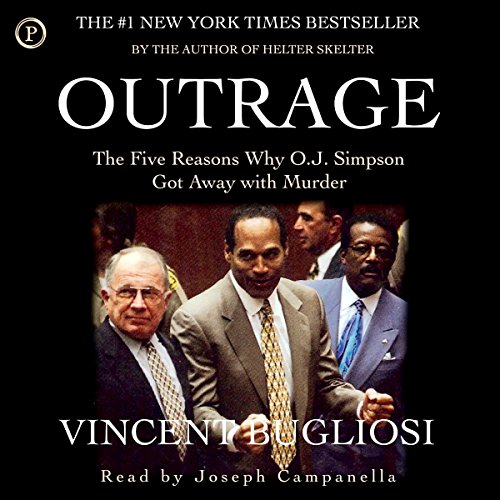 Written by: Vincent Bugliosi
Narrated by: Joseph Campanella
Try for $0.00

What went wrong in the O.J. Simpson double-murder trial? Former prosecutor Vincent Bugliosi dares to lay bare the bungling he perceived in the case. Incriminating evidence was never presented and lapses in strategy left prosecutors Marcia Clark and Christopher Darden at a disadvantage. These are just a few of the fatal errors that led to a victory for the defense. Listen as Bugliosi weaves his own final summation, laying out the evidence in its proper sequence and forestalling or rebutting the ploys of the defense. Bugliosi is familiar with high-profile murder trials, his most famous one being the Charles Manson case, which became the basis for his book, Helter Skelter.

What listeners say about Outrage

Congratulations Mr. Bugliosi, this is the best take on the trial of the century. Your experience shines through on every page. You tear apart the Dream Team but you seem to have full awareness of Darden and Clark and their endless errors, poor judgement, and weak trial smarts that ultimately gave the jury enough to their part of this nightmare with a not guilty verdict. I had no idea the clear evidence that the egos of the prosecution chose not to share with this jury. They killed Nicole and Ron over again with laziness and poor choices, which sound from you to be basic trial 101. I also had no idea how much help they had which only intensified their determination to be part of the Dream Team which they ultimately helped with their lame choices. I know I sound a little pro defense right now, but that is not the case, you share information that shocked me. Information, the prosecution did not use that I - like you believe would have made all the difference in the outcome, no matter what what the Dream Team threw out. Justice was not served on so many levels. I applaud your book which is shocking, well put together, and truly identifies that THE TRIAL ON THE CENTURY was in fact a comedy of errors by all involved.

Would you listen to Outrage again? Why?

Probably not. The narrator speaks far too fast and his voice has an angry tone. While I understand the author's frustration, the level of anger when combined with fast speech garbled the meaning at times.

Slow down! Read it as if you were the listener. It feels like you are reading it just to,get the audio,book finished. That rushed quality makes it difficult to understand the words at times. I am a big fan of Mr. B and have enjoyed his books, but will likely stick to print versions.

I enjoyed this book just as much as Reclaiming History. I am always skeptical of those who condemn a jury verdict without hearing all of the evidence. Bugliosi puts forth convincing reasons that justice was not served in this case. He convinced me. I would recommend this book without reservation.

Why do abridged audiobooks evven exist? A fucking scam, I tell ya. Shame on those selling this.

Perfect. A concise, informative, knock out!

This book was exactly what I was hoping it would be. It explains the evidence in this case, and does a great job explaining why the outcome came out the way it did.

Vincent Bugliosi really lets loose is his thoughtful insightful way. The book moves along at a brisk pace, which totally suits the material.

Joseph Campenella seamed the perfect narrator for this book... although his voice kept bringing me back to memories of his `Science International` TV spots from the 70s.

This was very well put together and definitely took me back to the OJ trial days. I was intrigued and am so happy I listened to this, especially before the TV movie comes out. It's amazing to hear everything that went wrong and a well known prosecutors take on the whole ordeal.

I was outraged myself!

I hadn't followed the OJ Simpson case at the time that it occurred, but this book was utterly fascinating. I found myself outraged with the handling of the case and the blatant arrogance of OJ Simpson. I would highly recommend this book and it is excellently narrated.

You Thought you Were "Outraged" Before!!!

Prepare yourself for all the details which outline why you should be even more angry about this case. It took me years to be able to face the details of this case again. There was so much I didn't know that it is outlined in this book. It dredged up old feelinsg and added a few more. A must read for those of you either believed in Simpson or not.

Wow. Loved every minute of it!

What made the experience of listening to Outrage the most enjoyable?

I really liked the narrator because he read with such passion about the subject matter. You forget that he is the narrator and not the actual author. I also loved all of the behind the scenes information that was never told to the jury or to the public. And why not?

It kept my interest, expecially on a long drive to Las Vegas. I didn't want to miss a word. Understanding everything that happened in this case from this book was eye opening.

Which character – as performed by Joseph Campanella – was your favorite?

Their was no one character, but I really enjoyed his performance.

Simpson received so many breaks from people in the system who flat out failed the victims. The worst were the 2 detectives who were given a golden opportunity to grill a defendant fresh from the scene of the murders who submitted to their questions without having an attorney present. Instead of seizing the golden opportunity, they treated him deferentially and let him walk! Marcia Clark failed to break down the case in simple terms to the jurors and wisely use her time to show them that the police planting evidence defense was plain nonsense. Bugliosi explains why. It’s not a perfect rating because he’s quite insulting in expressing his opinions - but there’s no denying his positions are logical and well reasoned.