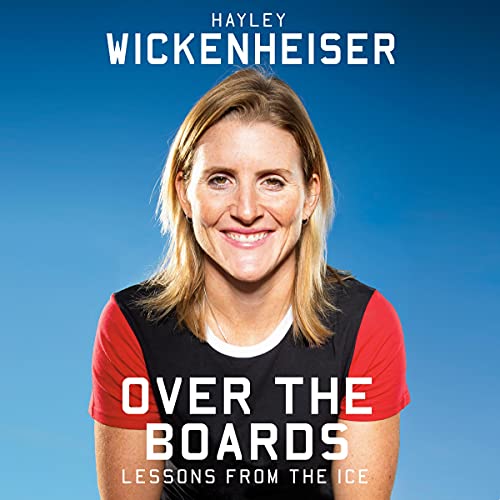 The greatest women’s hockey player of all time, Hayley Wickenheiser shares the lessons that won her four Olympic gold medals, and hard-earned wisdom distilled from moments when she fell short.

There is no one in the world like Hayley Wickenheiser.

Thirteen World Championship appearances. Six Olympic Games. Hockey Hall of Famer. All while raising a child, earning multiple university degrees, and not benefiting from the financial stability male professional athletes have. She gave the game everything she had - now, Hayley shares what the game gave her.

From motherhood to pro leagues to her new career in medicine, Hayley shares the hard-won lessons she learned on and off the ice that helped her not only have a record-breaking hockey career but craft a life filled with joy, growth, and challenges. In her own words, Hayley shares how she rose from the backyard pond and changing in boiler rooms (because girls' dressing rooms didn’t exist) to Olympic MVP (twice). How becoming a parent made her a better athlete. How she learned to thrive under monumental pressure. But she doesn’t stop at revealing the pillars to her tremendous success - Hayley delves into her immense failures and how she grew from them. Like Kobe Bryant, Tom Brady, and Abby Wambach before her, Hayley shares her wisdom through personal stories of triumph, relentlessness, and more than a couple confrontations. Told with humour, compassion, and steadfast optimism, Hayley’s practical advice, coaching, and invaluable perspective inspires readers to never accept “that’s not the way we do things” or “that hasn’t been done before” as limitations. An empowering and pragmatic guide, Hayley encourages listeners to not follow in her footsteps, but to carve their own ice.

“Hayley - now Doctor - Wickenheiser shares grit and determination, along with anecdotes you won’t see on TSN or Sportsnet, in her fabulous new book Over the Boards: Lessons from the Ice. This page-turning offering from someone who knows how to win at the highest level and how to take loss as a great opportunity to grow and improve is for everyone. Read and learn how #22 continues to do it all - and do it well. There are so many elements of this champion’s methods you can add to your own life.” (Clara Hughes, OC, OM, six-time Olympic medalist, author of Open Heart, Open Mind)

“Hayley Wickenheiser is an incredible human being...this is what a billion hours of hard work looks like.” (Ryan Reynolds)

“A detailed and rare look at greatness - one of Canada’s most decorated athletes pulls back the veil on what propelled her to the top. Hayley Wickenheiser has written the playbook of all playbooks. Over the Boards: Lessons from the Ice is for anyone who wants to win in any industry from business to science to sports to the arts. But what makes this book a gem is how it prepares you for success in the most important and formidable arena of all: life.” (Perdita Felicien, Olympian and author of My Mother’s Daughter)

What listeners say about Over the Boards