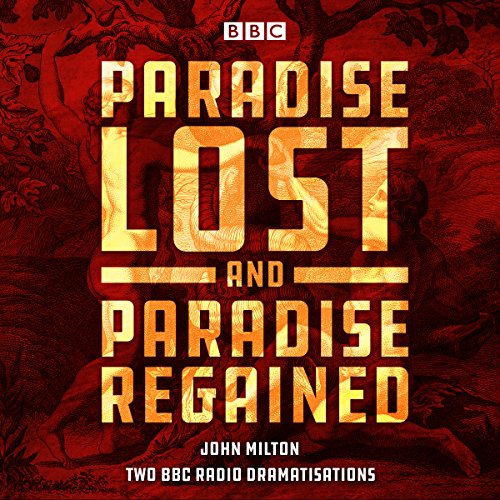 The highly-acclaimed BBC Radio 4 dramatisation of Milton's epic poem telling the story of the fall of man and also its sequel, Paradise Regained.

Out of chaos shall come order and out of darkness shall come light. Paradise is lost - and then regained.

First published in 1667, Paradise Lost describes Satan's plot to ruin God's new and most favoured creation, Mankind, and recounts the temptation of Adam and Eve and their banishment from the Garden of Eden.

Paradise Regained, published in 1671, tells of the temptation of Christ by Satan as he wanders in the wilderness for 40 days and nights.

this is not a dramatization!

unlike the BBC's adaption of Dante's Inferno this is only an abridged reading of John Milton's poem. they hired multiple actors to read different parts of the poem but it's not dramatized. the BBC blatantly lied. if anything this would be a dramatic reading. dramatic readings aren't dramatizations though. a dramatization would require additional work in adapting the poem into an actual play format with sound effects.

basically what the BBC did was like filming multiple actors sitting together reading Paradise Lost then releasing it as a filmed version... it's stupid and lazy.

this is not audible's fault obviously.

This audio presentation of Paradise Lost is not only engaging for the listener but also captivating for the reader.

Ian McDiarmid was the perfect casting choice to vocalize the part of Satan. He added just the right amount of tragic and wickedness to it, which made the Devil both relatable and also alienating.

Robert Glenister was also a spot on cast for the role of the Son/Jesus. His voice was both comforting and also powerful, a great counterpoint to Ian’s.

I’ve listened to this audiobook over 10 times and I discover new nuances each time I come back to it.

Other than being abridged this is an excellent full cast production put on by the BBC.

Great performances of a classic story with annoying credits

This epic poem is wonderfully performed. This is well worth listening to. Unfortunately before and after each of the roughly fifty episodes each of the performers are given credit. It is like watching a movie and after each scene credits roll across the screen telling which actor played every
role. It is annoying and breaks the mood. Is the performance to inform and entertain the audience or to glorify the performers? This would be a stupendous narration if not for the constant interruptions with all the credits!!!

My legions the time has come, execute order 666 and get this book. Seriously though these are some of the best voiced characters EVER. any fan of epic drama and storytelling should get this. unfortunately this nerrative is VERY sexist basically blaming women for all of men's I'lls and putting Eve in an inferior position right from the start. I was disappointed by the Paradise Regained section as it simply quoting the temptation of Christ by Satan from the Bible. it is entirely unoriginal and bland despite the excellent voice cast.
#EVEDIDNOTHINGWRONG.

Not a good version. Music very annoying. Look for a better version. You will thank me.

Listening to this epic poem was pure unadulterated delight! It was like paradise relived exalted!!!

They hit all the right pitches to keep this reading right in tune with it's poetic Shakespeare sytle and era. Loved every moment of it. Could literally imagine watching it as a play. It was that good!!!

I found myself revisiting this story recently, having last read it almost 30 years ago. I was not a great fan of Paradise Lost before, largely because Eve annoyed me so (she looks to Adam for leadership, while he looks to God), and some of Milton's inventions (mainly those surrounding the character of Sin) seemed gratuitous. Also, to a modern mind (or at least to my mind) some of the descriptions of Adam and Eve and their time in the garden seemed almost campy.
Having listened to this recording, I am amazed at the difference truly great readers make in the meaning of a story. The actors in this project could not have been better, and perform their roles with great dignity, and without the slightest irony. Listening to this recording helped me, I believe, experience this book as its 17th century author intended, rather than as my jaded eyes had seen it before.
That said, it would be of great help to students if the publisher would label the recorded segments with the specific book (and maybe even line numbers!) from which the reading was drawn. Anyone who wants to focus on just Book V of Paradise Lost, for instance, has to do a lot of work to figure out where he or she should start listening. This problem almost turned me off the audiobook before I'd really given it a chance.

A classic poem of epic proportions.

Inundated with a depth of poetry this GenX is unfamiliar with. A missing masterpiece of which life before has been in ignorant want. A must for those who pursue classics. Particularly well done with multiple voice actors, thematic music, and clear articulated speach that draws the listener into the dialog. The Devil portrayed more intellectually stimulating than Darth Vader himself. An excellent oratory argument to justify the ways of God to man.