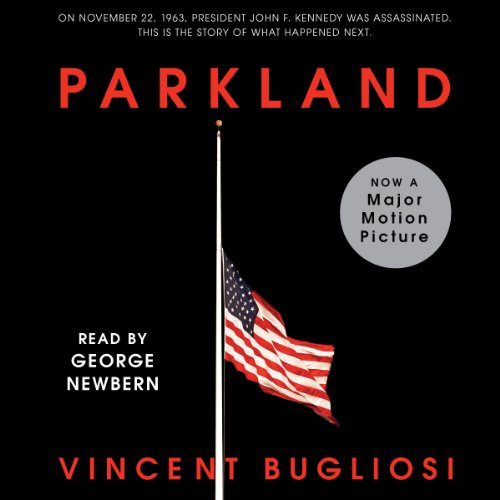 Written by: Vincent Bugliosi
Narrated by: George Newbern
Try for $0.00

Now a major motion picture! The exciting and definitive narrative of the assassination of President John F. Kennedy on November 22, 1963.

Releasing this fall, the movie - starring Paul Giamatti, Zac Efron, Jacki Weaver, and Billy Bob Thornton - follows a group of individuals making split-second decisions after this incomprehensible event: the doctors and nurses at Parkland Hospital, the chief of the Dallas Secret Service, the cameraman who captured what has become the most examined film in history, the FBI agents who had gunman Lee Harvey Oswald within their grasp, and Vice President Lyndon Johnson who had to take control of the country at a moment's notice.

Based on Vincent Bugliosi's Reclaiming History - Parkland is the story of that day.

What listeners say about Parkland

I haven't seen the movie "Parkland" yet. It may or may not be any good. But I'm grateful that it led to the publisher finally releasing an unabridged version of this masterful account of the Kennedy assasination.

The history of the book is interesting in itself. Vincent Bugliosi originally published a 1500 page book about the assasination, a book that took him some 20 years to write and which included this enthralling narrative as the first part. (The book would have been even longer, but the publishers decided to put the voluminous notes on an accompanying CD.) The other parts of the book described the various investigations into the assassination, official and unofficial, and it dissected the various conspiracy theories in excruciating detail. Later, the opening narrative was released as a standalone book, which was then adapted into the movie. That standalone section is what we have here.

Bugliosi sticks scrupulously to observable, documented fact in this account. For example, at the moment of the assassination, he doesn't tell us what Oswald was doing. What he tells us is what two of the eyewitneeses saw (a man firing from the sixth floor window in the School Book Depository). Later he describes the lineups where they identified Oswald as the man. Readers can draw their own conclusions.

Of course there's no question where Bugliosi stands. With a few adjustments, he supports the Warren Commission findings pretty much straight down the line. Or maybe it would be more accurate to say that he supports the conclusions of the Dallas police department, especially Will Fritz's homicide squad: they methodically and painstakingly built the case against Oswald in the two days following the assassination. Of particular interest in the narrative are the reconstructions of the interrogations of Oswald. Step by step, the detectives work through his denials; they never got him to confess, but it's hard to read this account without admiring their work.

I know that by saying that, I'm opening myself up to ridicule by those who remain convinced that Kennedy was murdered by a vast conspiracy. Been there, done that. I've read many of the books published on both sides of the issue, and over the years I've come to the conclusion that when it comes to misrepresentation, credulity, and disingenuously taking things out of context, there's plenty of blame to go around. I've gradually surrendered my own conspiracy theories - partly because of the vigorous arguments put forward by Bugliosi in the parent volume to this book.

A note about the narration. George Newbern does an excellent job. He gives distinctive voices to the different people involved, usually by suggestion rather than outright mimicry - a series of impressionistic portraits rather than impressions. One voice in particular deserves comment: Newbern nails Oswald. It's not just the twang, not just the inflection; it's the arrogance, the evasiveness, the buried fear, the sense of a deeply damaged man. I haven't heard Newbern before, but I definitely want to hear him again.

First, the book is a very detailed account of the events, though most of it is just a rehash of the facts recounted in Bugliosi's far superior "Reclaiming History". If you're familiar with the case, there won't be much new info for you here. Unlike "Reclaiming History", Bugloisi merely lists the known, mostly undisputed, facts, with little to no insight into Oswald's culpability or the presence, or lack of, a conspiracy. The earlier work is a masterful dismantling of the conspiracy stories, convincingly reinforcing the official (though entirely correct) findings of the Warren Commission. That isn't Bugliosi's goal here; he's just trying to provide the basis of a screenplay.

The audiobook is nearly ruined by an overbearing narrator who insists on speaking the words of certain characters in an affected voice, with unintended comic effect. Jackie Kennedy gets the most ridiculous treatment of all. And most annoyingly, names are chronically mispronounced, the most frequent being that of FBI agent James Hosty (which is supposed to rhyme with "toasty"), How long would it have taken to look this up? Why do narrators assume they know how to pronounce names without checking first? Some names, such as that of Life Magazine's Richard Stolley, are pronounced in multiple manners interchangeably.

I found I always wanted to listen just a little longer. I am intrigued by the personal stories of all involved in the Kennedy Assassination and to hear them go on about their daily lives and the extraordinary circumstances they had to deal with is very captivating. I would recommend this to anyone interested in the story of what happened on November 22, 1963.

Live Through the Experience Again!

The book was great at outling the fine points of the tradegy and history of the details surrounding the Kennedy assasination. the only issue was, I had just finished reading "Reclaming History by Vincent Bugliosi, which I found to be very similiar. But none the less, interesting and substantial reading. A must read for Kennedy enthusiasts. The movie was great as well.

This was a very good book, well written and well narrated. I am 58 and have read many books on the Kennedy Assassination over the years, most of them from the conspiracy point of view. This book follows the days events and delves very little into those theories. Even thought I know the story, I was riveted to it. George Newbern did a great job with the narration.

Yes, the Dallas police messed up, the did not record their interviews with Oswald and they allowed Ruby into the basement. The body was taken from Dallas county to Washington DC, in spite of the fact it was not a federal crime. Oswald lived in Russia, went to the Russian embassy in Mexico City and was a very strange individual. Ruby did have some ties to organized crime. All those things, and what seam like hundreds of other problems, are true. They do leave a lot of room for speculation, but that all is is. Just speculation.

Would you try another book from Vincent Bugliosi and/or George Newbern?

I have read other Bugliosi titles before and liked them. His book on Manson was very good. Parkland is a well written book and the writing style is easy to follow. My issues with this book are really about the content.

What does George Newbern bring to the story that you wouldn’t experience if you just read the book?

The narration is good and doesn't distract from the story.

Was Parkland worth the listening time?

The first part was a pretty good minute by minute account of the day but the second half, detailing the investigation, was very droll and patchy. Bugliosi paints the secret service, the Dallas PD and Sheriffs Department and the FBI as flawless organizations who "did the best they could" and Jack Ruby as a sympathetic character.

I've read dozens of books on Kennedy and the assassination, including the entire text of the Warren Commission Report. I've had a curiosity that began in 4th grade over 20 years ago, so when a new book comes out it get's my attention. I'm not a conspiracy theory true believer and I was just as critical of Oliver Stone but this book a) contains nothing new and b) goes so far to present Oswald as the lone assassin that relevant facts that have made people question the Warren Commission for decades are either ignored or presented as fiction. At best Parkland is a one sided version of an event that really needs to be touted as such. At worst it is revisionist history.

A very thorough history of the JFK assassination. Narrator was fine information was thorough and many things I had not heard before if this part of history interests you are strongly suggest this book

Not What I Expected But Enjoyed Anyway

My eyesight is going wonky so I was expecting the Parkland book about the school shooting . My mistake. However I really like Bugliosi as an author and George Newbern as a reader. Book had different details in it ( yes there are some left) and finished up pretty quickly.

As I listened, what I heard was the Warren Commission Report which translates to bunk.

Not what you think

Vincent Bugliosi never disappoints. So many researched details that I never knew. I would recommend.