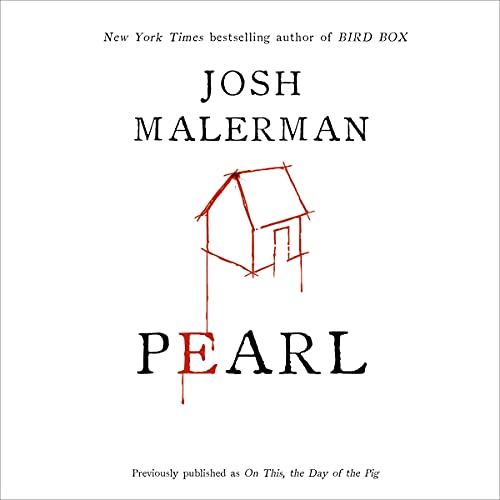 Written by: Josh Malerman
Narrated by: Sarah Mollo-Christensen
Try for $0.00

From Josh Malerman, the New York Times bestselling author of Bird Box and Malorie, comes the legend of Pearl, a strange new monster unlike any other in horror (previously published as On This, the Day of the Pig).

NAMED ONE OF THE BEST BOOKS OF THE YEAR BY THE WALL STREET JOURNAL • “Daring readers should find this tale of a malevolent telepathic pig to be a memorable experience.”—Booklist (starred review)

There’s something strange about Walter Kopple’s farm. At first it seems to be his grandson, who cruelly murders one of Walter’s pigs in an act of seemingly senseless violence. But then people in town begin to whisper that Walter’s grandson heard a voice commanding him to kill.

And that the voice belongs to a most peculiar creature: the pig named Pearl.

Walter is not sure what to believe. He knows he’s always been afraid of the strangely malevolent Pearl. But as madness and paranoia grip the town and the townspeople descend on Walter’s farm with violent wrath, they begin to discover that true evil wears a human face.

What listeners say about Pearl

I really enjoyed the narration on Pearl. The story well fairly foreboding but lacked that shocking moment for me that would’ve made it 5 stars.

Successfully gave me the creeps

The narration really set the mood, the story was dark and unsettling at times, but I was hoping for more from the ending. Overall I enjoyed this book and hope to never encountered any animal the likes of Pearl.

I was intrigued by the story's synopsis. It sounded very different, and it certainly was. I was hooked immediately. The author jumped into the action and kept it going. However, after about a quarter of the way through, the plot seemed to swimming in circles--the same experience for different characters without moving the story forward. I grew impatient waiting for something to develop.

From the synopsis, I expected something with shades of Orwell's Animal Farm. It did in kind of a ying to Orwell's yang. With this in mind, I kept listening, looking for an allegory. I suppose the fantastic story can be used as an allegory for different things to different people. The one that jumped out to me was an allegory for the internet. Not sure if this was the author's intention. But if it wasn't, it was a bizarre idea that went nowhere. The idea of an allegory is what got me through it.

NARRATOR: The narrator was very good. She varied her cadence with the emotion and action as well as the pitch of her voice.

narrater was fine. the story was.....I don't know man..lame? boring? kinda dumb? I feel like it was a 15 minute story stretched wayyyyy to far. it was pretty hard for me to get through this one. wasn't for me, might be for you. who knows.

was excited for this to end. became bored an hour in and suffered through the rest. had some okay parts. would not recommend.

Is Mr. Mallerman a Vegan perchance?

Loved it! This story took me through a variety of emotions and at the end of it, I couldn't begin to tell you who the real villians are. Perhaps, that is the beauty of it.

Loved it! Definitely a unique idea for a story, but turned out to be an awesome read/listen. Narrator was excellent. Would definitely recommend this book . 5 Stars