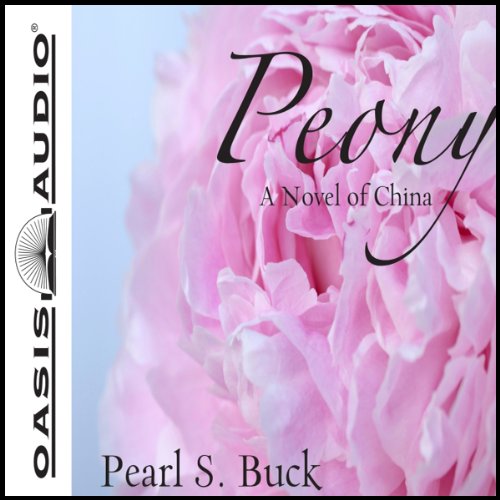 Young Peony is sold into a rich Chinese household as a bondmaid - an awkward role in which she is more a servant, but less a daughter. As she grows into a lovely, provocative young woman, Peony falls in love with the family's only son. However, tradition forbids them to wed. How she resolves her love for him and her devotion to her adoptive family unfolds in this profound tale, based on true events in China over a century ago.

What listeners say about Peony

Read People of the Book, Geraldine Brooks instead. Seriously.

I picked this up because I love Historical Fiction, or fictionalized history. I learned a bit, but not as much as I hoped. The author 'others' Jews and victim blames them for persecution. Then proceeds to underestimate their obligation to duty. Apparently being able to eat what you want and have concubines matters more to Jews than maintaining their culture. While this book has some interesting historical facts, the climax is senseless and makes no sense. And I need to vent about it....


Why would Leah decide to murder/assault her soon to be husband over a minor disagreement? Back in those days women just had to shut up when someone, (especially the son of a wealthy merchant they were betrothed to), insulted their no good, lazy brother. (David was accurate in his statement and if Leah was true to her character and culture, she would of seem him as wise and stayed humble.) She has nothing to gain by this, NOTHING! And everything to lose.

The storyline has her compelled to go to David, called by God, to confess her love. David feels God has brought Leah to him - then suddenly they quarrel about ridiculous nonsense and she tries to cut his head off??? Why isn't anyone else talking about this craziness in the reviews?

David's family is wealthy. A marriage has been arranged long ago between David & Leah. Leah marrying him draws him into being the Rabbi's heir, their marriage is the only way for the synagogue to flourish in the future! By this reckless action she destroys her family, her community and herself. Leah up until this point, is a selfless, dutiful daughter and was in total love with David, dedicated to her calling as a Jewish woman to propogate the persecuted people and as Rabbi's daughter to do what's necessary for the greater good of the Jewish community!

This story line makes no sense.

Even worse, after assaulting him with the sword; (a sword responsible for slaying Jews in foreign lands, a sword she kissed in her David's hands just a few days ago) instead of checking to see if she killed him or just harmed him, she kills herself. Which is against Jewish law, so again, super unbelievable. It's like the author became irritated with the storyline and character of Leah they created and instead of starting fresh, this was the solution.

Sloppy storytelling. Unless this anti-Semitic Sword cursed her and made her destroy the Jews in this land...🙄

This novel should of been called 'Bondmaid Manifests her Future'. It is such a ridiculously transparent tale of a maids desires. The characters are very 2D.

I couldn't even finish reading it. Up until this point it read like a bad romance novel, literally not much better than Twilight or 50 Shades. I can't imagine it will improve.

I want my credit back..

Jews in China - unexpected and quite interesting

I loved the book, "The Good Earth." It taught me a lot about China, its history and its people. When I saw this other book by Pearl S. Buck I thought I'd give it a try.

I wasn't disappointed. The story was quite compelling and the performance was excellent.

This is a story about a little Chinese girl sold to a Jewish family in 1850's China as a friend/servant of the family's young son. I didn't realize there were Jews in China until reading this story!

The story incorporates the history of the Jews in China, as well as their current (1850's) life style. It tells the story of Peony, her "adopted" family, and what happens when the family becomes assimilated into Chinese culture/life.

I enjoyed the Professors comment at the end of the book and her historical and archaeological review of the history of Jews in China. I was impressed at how well Peal S. Buck weaved the historical information into a fascinating story from the view point of a Chinese bonds women. Buck painted a picture of the land, culture, religious beliefs and business on the silk road into a story that includes suspense, loyalty, love, and family relationships. Kristen Potter did an excellent job with narration. I read some Pearl Buck stories back in the 1950 and 60s, I am so glad Audible is providing books by this great author, looking forward to reading more Peal Buck books.

Peony is the first book I have read by Pearl S. Buck and it will not be the last. I plan to now move to her most famous work The Good Earth. Peony tells the story of a Jewish family living in China around 1850 and weaves deftly personal and cultural conflicts with serviceable and comfortable prose. The plot has twists and resists a pat ending. The afterword provided the historical background and helpfully pointed out spots where Buck took literary license in the chronology of the Jewish diaspora into China.

This is historical fiction novel but much of what the author writes is based on facts about a Jewish family who is living in China in the 19th century, The end of the book gives some great historical facts about how the Jews came to China as they were forced to leave their homeland. A great story!

What did you love best about Peony?

I really enoyed this book. The srory line was good, with interesting characters. I first thought the book was just a romantic tale between the upper and poorer classes of Imperial China, but it was more complex that that. I hadn't realised that there had been such a strong Jewish comunity in China at that time, so it was historically very interesting too.

I enjoyed the way it was written, it seemed to flow well. The characters were all interesting and drew you in,

I thought it was well narrated.

I would probably liten to this again sometime.

This novel is perhaps not as strong as The Good Earth or Pavilion of Women but the story chronicles a fascinating chapter in both Jewish and Chinese history; the final years of a distinct Jewish presence in Kaifeng. A warning; some Jews may be offended by Buck's views on why Jews have been historically persecuted. The book includes a wonderfully informative epilogue by a scholar of Sino-Judaica which provides a historical context for the novel. It affirms the accuracy of much of what Buck writes and points out specific places where Buck has taken literary license. For Buck fans, like me, you will want to listen, and for those who want to learn more about the Jewish culture in China, you will also want to listen. For centuries, China was a safe haven for Jews who came to China via the silk road. In the years leading up to the Holocaust, Shanghai welcomed Jews when countries around the world denied them entry.

This book reminded me of Imperial Woman. Kristen Potter narrates both and provides an easy listening experience. Well worth the time to enjoy another classic Pearl S.buck.

I was there in every thought, every scene, every emotion, I was there. Amazing author.

Would you consider the audio edition of Peony to be better than the print version?

I'm not familiar with the print version but I found this audiobook to be excellent. The story was riveting. I had found the first chapter rather slow going, but once the story moved into the second and subsequent chapters I found myself hooked. The themes of loyalty, religiosity, power and love were interestingly interwoven in the story. It was very well read.

What was one of the most memorable moments of Peony?

Perhaps the point where Leah killed herself. I never saw that coming and it was certainly a critical turning point.

The one that saw David and his father spending the night out on a boat for dinner with their friends.

Yes...but I think it is best heard in short sittings as there is much to ponder upon as the story unfolds.

You've done a super job with this version !

While I enjoyed this story by Pearl S. Buck, I don’t believe ANYTHING she wrote after the magnificent “Imperial Woman” could compare. Perhaps it was my expectation that this book would be on the same level that left me feeling disappointed, especially in the ending of this book.

It wasn’t that this book wasn’t a good read (you can’t go wrong with anything written by Ms. Buck)! However, I had been SO taken with “Imperial Woman,” that despite its length, I listened to it twice, back-to-back!

The ending of this book felt flat and unsatisfying. It was not the ending I had hoped for for Peony. I suppose I had my own version of the ending written in my head, and it wasn’t anything like the actual ending.

Despite this, the characters were well-developed; likable, relatable, sympathetic. Who among us has not struggled with feelings of unrequited love at some time in our lives? Although it certainly doesn’t read like a history lesson, I learned much about the history of old China and it’s ways, something I enjoy every much as I have a daughter adopted from China. I would most likely NEVER open a history book to learn about China, but through Ms. Buck’s writings, I learn far more than just geography, but about the old ways and traditions of China, in a very entertaining way.

I recommend this book, but don’t expect it (like I did) to be on the same level of “Imperial Woman.” Judge it on its OWN merit and enjoy it.