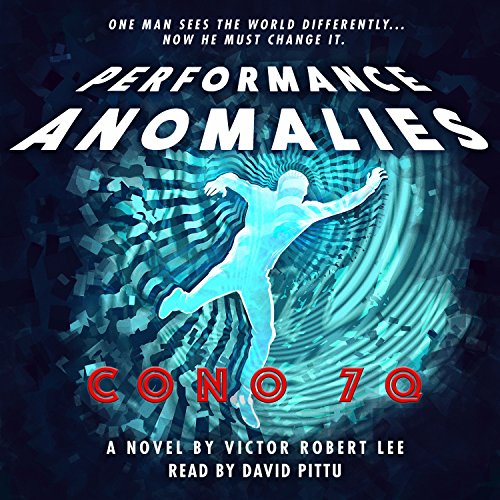 Read by Tony-nominated actor David Pittu, who received the 2014 Best Male Solo Performance award for his reading of Donna Tartt's The Goldfinch.

Victor Robert Lee's provocative literary spy novel Performance Anomalies launches a protagonist, partly of Chinese and Russian origin, to rival the most memorable espionage heroes. Cono 7Q is a startling young man of haunting heritage who has been gifted - or cursed - with an accelerated nervous system. An orphan and a loner, he acts as a freelance clandestine agent, happy to use his strange talents in the service of dubious organizations and governments-until, in Kazakhstan, on a personal mission to rescue a former lover, he is sucked into a deadly maelstrom of betrayal that forces him to question all notions of friendship and allegiance.

Relevant to our geopolitical times, Performance Anomalies tracks the expansion of Beijing's imperial reach into Central Asia, and the takeover of corruption-riddled Kazakhstan.

Cono 7Q's main adversary is a brutal Beijing agent whose personality has been twisted by the Cultural Revolution's devastation of his family. Performance Anomalies travels from Brazil and Stanford to Kazakhstan and the Tian Shan mountains, covering an engrossing emotional landscape set against the backdrop of an emerging new Cold War between America and both China and Russia.

This is a worthy spy!

Our hero, Cono, is a free-lance spy. With his heightened nervous system, mixed heritage, and gift for languages, he makes a great spy. Now he’s on a personal mission to assist a friend out of a heap of trouble. In Kazakhstan, the stakes are raised as European oil resources are threatened and weapons-grade uranium comes into play.

I was easily swept up by this book. Cono is perfect for espionage and it was refreshing to have a non-Caucasian hero. His mixed heritage and linguistic skills allow him to blend into so many different cultures. Cono is sometimes referred to as Cono 7Q and there’s a short flashback that explains this. He has a rare mutation on gene 7Q that accelerates his nervous system, giving him an extra edge. He can pick up on minutia and interpret their meanings quickly. Also, he has lightning fast reflexes. He’s just on the edge of being a superhero.

Early in the story, he receives a desperate call from his former lover Xiao Li. She’s currently working as a classy prostitute and unfortunately she witnessed something she shouldn’t have. Now her life is in jeopardy. Cono is several countries away but he calls in a favor with his long-time friend Timur who can get to Xiao Li quickly.

Once Cono meets up with Timur, things get messy. There are plenty of things that Cono and Xiao Li are unaware of, making it difficult to figure out who is on their side or against them. I really enjoyed the changing allegiances as people make backroom alliances. It made it so much harder for Cono and Xiao Li to untangle themselves from this mess.

My one quibble with this story is how the ladies are sexual objects or love interests, each of them. Now they are a bit better than Bond Women in that each of them has their own personality and a role that affects the plot. Still, I couldn’t help giggling and rolling my eyes a bit as each woman wanted to bed Cono. Maybe that 7Q gene also puts out an irresistible pheromone. Dimira is a teacher and has known Cono for some years. She provides a temporary safe house and some contacts for Cono. Katerina, a Russian asset, has also known Cono for some years and has enjoyed his personal company on their dealings. Xiao Li struck me as rather petulant and self-centered. While I didn’t like her character very much, I did like how she was a catalyst for the story and how Cono risked much for her safety.

There’s this torture scene that had me laughing quite a bit. Now that makes me sound a bit demented but Cono came up with an excellent way to get under the skin of his captor. The torture was harsh but Cono’s response was all defiance but defiance with a solid understanding of how to demean his captor in front of his lackeys. It was great. That is my favorite scene from this book.

I’m definitely looking forward to more adventures of Cono 7Q. This book kept me up to 1am as I didn’t want to put it down.

I received a free copy of this book.

The Narration: David Pittu was a very good fit for this book. He did an excellent Cono, giving him a vague, unplaceable accent (as the book describes it). There were a ton of accents in this book and to my untrained ear, he did a good job of keeping each one distinct. There were also plenty of characters who yelled and Pittu used skill in making it sound like yelling without actually raising his voice and blowing out my ear drums. His female voices were varied and believable. There were a few tender moments and he did a good job working with those emotions.