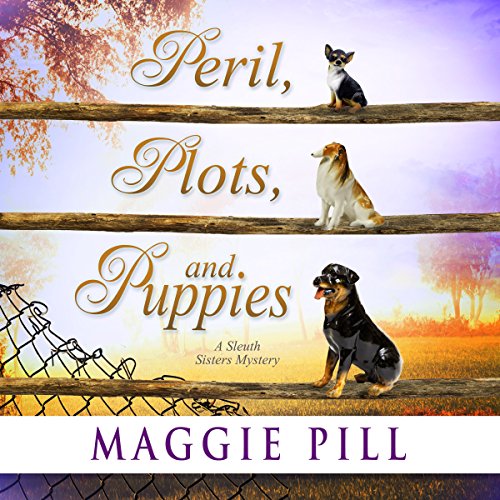 When a midnight murder comes to Allport, Barb is observed conducting one of her “Correction Events” nearby. The police want to question the Grammar Nazi, and Retta insists the only way to save Barb’s reputation is to solve the crime before her secret activities are revealed to the whole town.

The victim was a newcomer to Allport who was engaged to marry a local businessman’s attractive but spoiled daughter. Retta finds Frannie Habedank particularly irritating, since the younger woman commands the attention of just about any man who comes near her. Perhaps rightly and perhaps not, Retta is convinced Frannie killed her fiancé.

As the Sleuth Sisters probe the mystery, they learn Frannie’s father wasn’t completely happy with his prospective son-in-law. Many back in his home town considered Steve Deline a “slug”, and even the man’s own brother hasn’t got much good to say about him. It’s difficult to eliminate any suspect, but who would take violent action and end his life with a blunt metal object?

On a different case, the sisters uncover a puppy mill, which results in the seizure of two dozen neglected and pitiful dogs. Faye’s wholehearted plunge into helping with their recovery means she’s distracted from events at the agency.

As Faye finds new homes for dogs and Barb frets about being exposed as the Grammar Nazi, Retta wrestles with a question of her own. She has a life-changing decision to make by the end of the year, and it’s already December. She’d like some advice, but when everyone she knows is involved, where can a woman get objective input?

Though personal issues get in the way, the sisters know that when the situation takes a perilous turn, they can count on each other.

What listeners say about Peril, Plots, and Puppies

A detective agency run by three middle-aged sisters run a detective agency in their small town in Lower Michigan. They solve murders, get in trouble, and may be harboring a grammar ninja. This is the sixth book in this cozy mystery series, and I thoroughly enjoyed it. When an engagement ends in the prospective groom’s death, the sisters are asked to help with the investigation. The bride-to-be believes the police are after her and wants the Sleuth Sisters to find someone who was seen by a witness. These sisters and their men are also dog lovers and rescue animals. Baby Boomers and those who love animals will surely enjoy these books. The narrator in the audiobook I listened to does a great job keeping the voices original.

Maggie Pill has crafted another excellent addition to her Sleuth Sisters series. As with the other installments, this has a light mystery laced with plenty of humor. Judy Blue, Liz Cloud, and Anne Jacques give wonderful performances as they bring it all to life. The only downside is I have to wait until Maggie Pill writes another installment to enjoy more of the fun.

A Grammar Nazi and a Puppy Mill

In <strong>Peril, Plots, and Puppies</strong> by Maggie Pill, told from the various perspectives of the three sisters who make up the Smart Detective Agency, Barb goes out one night on one of her secret "correction events" in which she fixes the grammar of public signs. While finishing up, she hears a muffled sound and hurries away. The next day, she is startled to learn from her sister Faye that a murder took place the previous night and the body dumped a few hours later in the alley next to where Barb had just been. Soon, word has spread all over town that the "Grammar Nazi" killed the man. Barb faces a particular dilemma when Frannie Habedank, fiancée of Steve Deline, the murdered man, tries to hire the Smart Detective Agency to locate the Grammar Nazi and thus Steve's killer.

As Barb and Retta discover the unsavory nature of Steve, Faye, the animal lover, has found something else to occupy her time. The sisters were involved in breaking up a puppy mill, and Faye is doing all she can to help the dogs, in particular the three house dogs of Kurst, the brute who owned and ran the mill. The chihuahua has adapted well to living with Faye's son, Cramer, but the border collie is miserable with Faye and the rottweiler too aggressive to get near at the farm where Cramer and the family of Faye's other son, Bill, live. So to help the dogs, Faye makes a deal with the devil: She will provide a home cooked meal every day until Kurst's hearing if he will teach her how to handle the three dogs. This deal will ultimately help all three sisters as they work to solve the murder of Steve. Further, it will allow three damaged and abused dogs to find loving homes and happiness.

I have enjoyed all the Sleuth Sister books, and <strong>Peril, Plots, and Puppies</strong> was no exception. When the sisters raided the puppy mill, I confess to becoming disturbed and concerned about whether I would like this book very much. I am so sensitive about seeing animals hurting that I don't even watch animal movies that I know will end positively because I can't stand to see the animals go through difficulties through the course of the movie. Thus, I became wary about the presence of a puppy mill at the start of the book. However, I was pleasantly surprised to find that while the book does show the sad conditions of the puppy mill, it immediately jumps to focusing on the redemption of the dogs and the way animal lovers rush to rescue the dogs.

This book continues with the creative way that the sisters take turns narrating the chapters, giving their own perspectives on whatever situation they face. It is fun to hear the way the three view the same things differently and interpret each other's actions. The sisters behave like real sisters, with their differences but true love for each other. Over the course of the series, we've seen the trio come to learn to work together as a team, and in this book they determine which woman will take on which task by recognizing the strengths of each one. They have truly become a team, a key message of the series being the value of women, sisters in particular, uniting their strengths to become a strong unit.

The Sleuth Sisters series is one I especially encourage people to listen to on audio instead of reading visually. Three remarkable actresses perform the roles of the three sisters, making the book truly come alive. Judy Blue reprises her role of Retta, and Anne Jacques reprises her role of Barb, while Liz Cloud replaces Laura Bednarski as Faye. The three women demonstrate the unity seen in the sisters in the book, imitating each other's voice in their performances.

<strong>Peril, Plots, and Puppies</strong> was thoroughly enjoyable to listen to. The plot has interesting angles to it, and it has a fun touch of humor to it, especially regarding Barb's "correction events." The characters are well- developed, even the dogs, each of whom has its own special personality. I highly loved this book and give it five stars!

<strong>Disclaimer:</strong> I received this book for free for review purposes, but that had no influence on the content of my review.