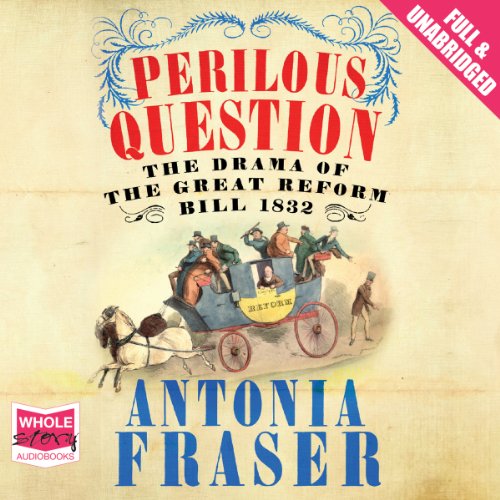 Perilous Question features an eventful, violent often overlooked period of British history. On 7th June 1832, William IV reluctantly assented to pass the Great Reform Bill, under the double threat of the creation of 60 new peers in the House of Lords and of revolution throughout the country. This led to a total change in the way Britain was governed, a two-year revolution that Antonia Fraser brings dramatically to life.

"A writer whose command of sources, eye for detail, perception of character and shrewd judgment enable her to bring the past truthfully to life" ( Sunday Telegraph)
"Drama, betrayal, religion and sex, it's all here, adorned by often fascinating, at times esoteric detail" ( Guardian)
"Fraser brings to life the female stars circling the Sun King in an account that successfully combines erudition with gossipy stories of the kind the Versailles courtiers loved so much." ( Sunday Times)

What listeners say about Perilous Question

Antonia Fraser, one of the great historians & biographers on the British scene. I have read a number of her books before but this may be the first one I've listened to. The book is very well written and narrated.

It is a slice of history book, centered around the reform crisis of the 1830s. A mix of political history, constitutional (British) history, and straight old narrative history of the time. Fraser effectively portrays what was going on, focusing on the main personalities involved in the story and providing good biographies to those personalities. I felt as if I was in the time, a good indicator of the strength of this history. Although I knew vaguely about the reform crisis already, this gave my college-recollections a great refresher. I also think that people interested in American constitutional history and in the evolution of voting rights in the US would benefit from this book. You do not just have to be interested in British history to find it useful in understanding US history and even the debates about voting rights (i.e., in the Supreme Court) of today.

British Political History at its Finest

This is another worthy book from one of the great stylists of modern historians. Lady Antonia Fraser has crafted a marvelously readable (or listenable) tale of one of the great political accomplishments of the nineteenth century--the Reform Bill of 1832. I confess to loving traditional narrative history told with a clear look to the future impact of the event under discussion. To that end, Fraser examines the role of the key players in this parliamentary drama, and doesn't hesitate to probe the foibles of those players. Too, the author gives the reader/listener a solid understanding of the circumstances that pushed parliamentary reform to the forefront of the political agenda.

It is an unfortunate thing that this book may not get the large audience it deserves. Some may see it as too old fashioned or too narrowly focused to command the kind of attention that other lesser writers/historians command. To my mind, the kind of political dialogue and compromise that the Reform Bill entailed, is seldom seen any more, in British politics or elsewhere. So there is an inevitable whiff of nostalgia here for a lost era. That nostalgia is not misplaced in my opinion, as we witness the degradation of political discourse not only in Britain, but clearly also in the United States.

Fraser is one of the great figures of 20th and now 21st century letters and her husband, the late Harold Pinter, was another. I not only recommend this book but if you wish to learn how she became the writer and reader that she is, please also read her latest memoir. I hope Audible soon makes it available!