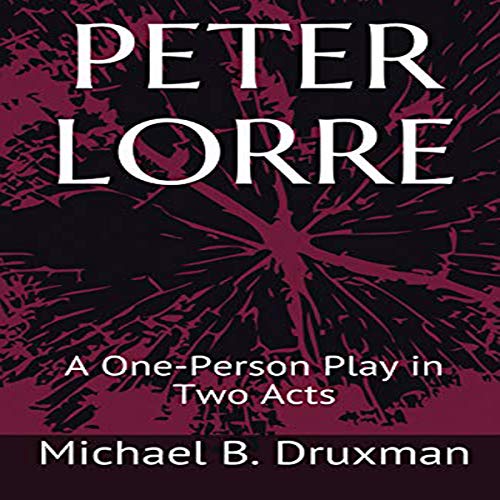 Written by: Michael B. Druxman
Narrated by: Bill Schafer
Try for $0.00

"You know, I can get away with murder. The audience loves me.” - Peter Lorre

Peter Lorre was the “master of menace”. From his first film, Fritz Lang’s M, in which he was cast as a child murderer, to his films in England with Alfred Hitchcock, to his stint at Warner Brothers where he played unsavory characters in such movies as The Maltese Falcon, All Through the Night, Casablanca, and Arsenic and Old Lace, to the amusing horror pictures he made with Vincent Price for producer Roger Corman (e.g. The Raven), the Hungarian-born actor made an indelible impression on motion picture audiences for well over 30 years.

Lorre’s personal life was also filled with conflict. A half-Jewish fugitive from Hitler’s Europe, the actor was married three times, was the victim of an unscrupulous business manager, and also dealt with an off-and-on addiction to morphine. Peter Lorre, Michael B. Druxman’s one-person stage play, finds the actor in poor health near the end of his life. He contemplates his third divorce and ponders how he will provide for his young daughter, while remembering the greener years that he spent with the likes of Humphrey Bogart, John Huston, and Sydney Greenstreet. One simple set.

What listeners say about Peter Lorre

Peter Lorre has always been a favorite of mine in movies such as The Maltese Falcon, Casablanca, The Horror movies with Vincent Price, and you can't forget the 8 Mr. Moto films.

Peter had 110 film credits from 1931 until his death in 1964. He was very good friends with Bogie, and even convinced him to marry Lauren Bacall..... All the smoking was a little annoying and I think they could have ramped it down a little

This audiobook is entertaining and features Peter's great stories. I think Bill Schafer did a descent job narrating.

A good review of someone we remember from his portrayal in the films. This also brings out the unlucky he had in business manager and in marriage. Well done and good narration by Schafer. Given audio for my voluntary review