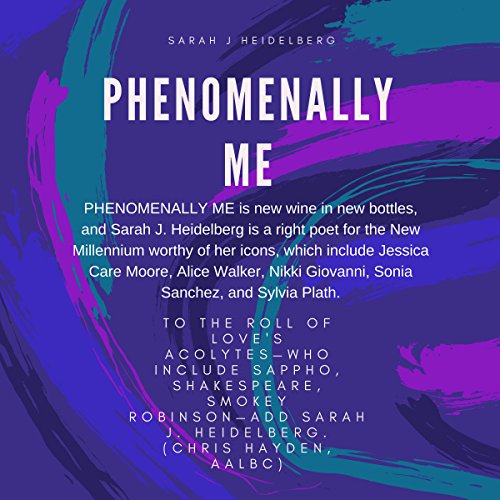 In a dark room with a blue light In the basement, music just right Nothing going down but the Mellow sounds of Mr. DJ's turntables Going round" Boyz II Men croon As we groove to the beat

Phenomenally Me is the first collection from Kansas-born African American poet Sarah J. Heidelberg, and a lively and impressive compilation it is; by turns emotional and thoughtful, joyful and melancholy, blending the discipline and technique of formal lyric verse with the brashness and daring of performance poetry.

I can hear the moldy figs of the poetry establishment now. "Love poetry? How trite!" Have they been so long in the House of the Dead, mummifying Robert Frost, that they have forgotten that Eros, God of love (Erzulie in the pantheon of Voudon) has been the most steadfast patron of verse? Have they already forgotten that the god/muse was propitiated by ancient Egyptians, praised by the Babylonians, puffed up in Sanskrit, Latin, and Greek?

To the roll of Love's acolytes - who include Sappho, Shakespeare, Smokey Robinson - add Sarah J. Heidelberg.

It is Ms. Heidelberg's desire that these poems be heard aloud. Phenomenally Me, however, is not a mess of doggerel jotted down on napkins 10 minutes before she recited them at a slam or open mic.

It is a carefully crafted blend of classical and modern influences, feminism and post feminism. It would be a welcome addition to an update of the Ras Baraka and Kevin Powell anthology, In the Tradition. Phenomenally Me is new wine in new bottles, and Sarah J. Heidelberg is a right poet for the new millennium worthy of her icons, which include Jessica Care Moore, Alice Walker, Nikki Giovanni, Sonia Sanchez, and Sylvia Plath.