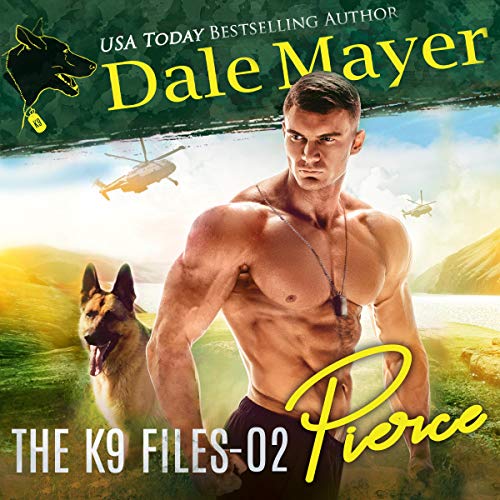 Written by: Dale Mayer
Narrated by: Jack Calihan
Try for $0.00

Just because helping out is the right thing to do doesn’t make it easy...

Pierce is on the hunt for Salem, a K9 military dog that belonged to Pete, a veteran, who can no longer look after himself or the dog. So, the dog has been handed from owner to owner, until she’s become too much to handle, and now, the law is involved. No one has Salem’s best interests in mind, and they definitely don’t have Pete’s, either. Pierce is about to change all that - whether they like it or not.

Hedi, a young deputy, has lived in Arrowhead, Colorado, all her life and knows Pete and Salem but was helpless to do much when greed overtook his friends and family. She recognizes in Pierce the same qualities that Pete has, and by Pierce’s actions alone, she knows a corner has been turned. She also understands the locals won’t take it lying down, and this means war.

Pierce served his country overseas for many years, and seeing another veteran in trouble makes him realize the fight isn’t over, even after life in the Navy ends. In fact, this battle has just begun. But, this one, Pierce will finish. And he plans to win.

What listeners say about Pierce

Did not like the narrator at all. He was to monotoned. I couldn’t stand it, I even changed the speed but it was still awful

Book was awesome. The narration was horrific.

The storyline was so good. It has you on the edge of your seat routing for the good guy the whole time.

This narrator was so robotic and monotone he killed the enjoying of the story. I have read and Listened to every book in 3 other series and enjoyed all of them.

this narration made me want to scream, he was so bad. I say read the awesome book. skip the audio.

The reader (Ryan Frankona) is like a cross between a robot and the cop from dragnet. "Just the facts!"

this narrator is so monotone that i would find myself tuning him out even when a lot of action was happening. skip this audiobook and just read it.

I was looking forward to the second book of this series. About 2 minutes into it I couldn’t wait for it to be over. The narrator had such a monotone drone that I could barely stand it. The story ended up being decent, just what I expected but if I listen further in this series it will only be if the narrator is different. Also, as I look at the other titles it seems hat many are shorter than I like to send my credits on.

I can’t tell you how bad this narration was. I still can’t believe audible hasn’t had someone else do this. Cold he just read words. Hated it. I liked the book it but would read it next time.

The story is good. But read the book on this one. This narrator should be banned.

I love Dale Mayer's writing, which is the only reason I stuck with this book until the end. The narrator spoke in a monotone throughout the book, and when I say monotone, I mean robotic! The story itself is a typical romance, with the added bonus of rescuing former military dogs, and dealing with veteran issues in general. I would definitely read this book again, but on Kindle, not Audible.

I would have enjoyed this book if not for the narrator. Monitone. No inflection in voice. It was as if a man was just learning how to read. It was a waste of money.