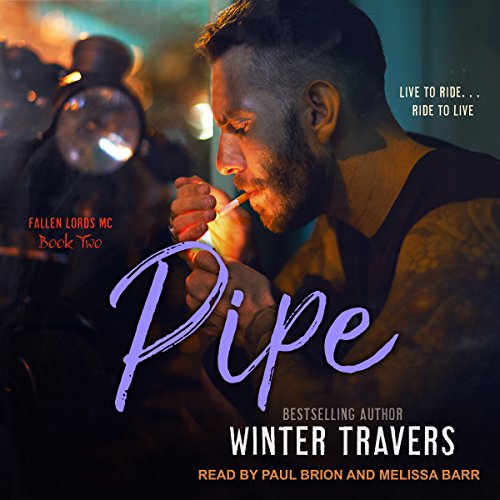 Growing up in and out of foster care, she rarely lets anyone in. After watching her best friend Karmen fall in love, Nikki starts to soften to the idea of a happily ever after with Fallen Lords VP Pipe. He's ruggedly handsome with a careless attitude, and it's the exact lethal and sexy combination that breaks Nikki's heart, reminding her life is far from a fairytale and making her run away from the few people she loves.

Pipe Mark cares about one person and one person only. A revolving door of women might spend the night in his bed, but they all know the score before they step foot through the door: 1. No promises. 2. One night.

They all respect the rules and go on their merry way more than satisfied in the morning. All except Nikki. Nikki makes Pipe want more. He never has before, but he longs to make promises of ending each night tangled in each other's arms. He just realizes it too late. Nikki runs, and Pipe ignores the way his body begs for him to chase her. While Nikki thinks Pipe can't give her what she needs, Pipe is worried Nikki is going to rock his world and never leave it the same.

What listeners say about Pipe

I got to Chapter 8 and DNF. It was just too silly.

Nikki met Pipe through her friend Karmen. He was obviously a manwhore, and the MC had a certain reputation. No surprise. Nikki and Pipe saw each other a couple of times, and then they slept together. Two weeks later, Nikki got the courage to surprise Pipe at his apartment, where he was with a club whore getting a blow job. Nikki raced off, so heartbroken that she left town immediately, telling no one, and keeping her new location a secret.

We didn't witness any of that, but -- excuse me? One night with a known manwhore and you're so in love that you will completely uproot your life when you discover that he has other women? (Don't even get me started on why he would take a club whore to his apartment. They do that stuff in the clubhouse!) It was just so implausible, I gave up.

TBH, if I had connected better with the writing or characterization, I probably would have continued listening. Since I was annoyed and didn't care if the couple got their HEA or not, I moved on.

Wow, this ranks up in my top 10 for sure, I’m a hard critic but keep this story line up

loving this series. these guys are awesome. love the bikers. love the girls. can't wait to read the rest

Don’t judge this story by the reviews

I love this series so far. I try not to read reviews for fear of spoilers, but I accidentally read one and was disappointed. I did not agree with it. I enjoyed this book as i did the first. Pipe is your typical biker. Parties and women at his disposal. Nikki is a guarded and not your typical biker groupie. Put them together and see what happens.

this book and book one has so much potential but between the narrator not giving any life to the words it just goes down hill. and this has to be the softest MC in the history with only seven members. lol I get this of just one chapter of the group but seven members of laughable. this was a ok read but could have been Soooo much more!

Loved the characters and the narrators didn't make me want to cringe. Bottom line, I laughed a lot.

I’ve read this book several times but listening to it makes it so much better. I enjoyed every moment of this story. Nikki and Pipe are smoking hot together. All the other characters are hilarious, and absolutely interesting.
The narration was fantastic.

this is such a great story. I love the relationship between pipe and nikki, its such a great story about a "badass" biker finally finding the love of his life and getting together after making a dumbass mistake. plus there is a little twist that keeps the story interesting. such a must read!

Romance, stalker and girls who love bikers are the foundation of this book! I liked it!