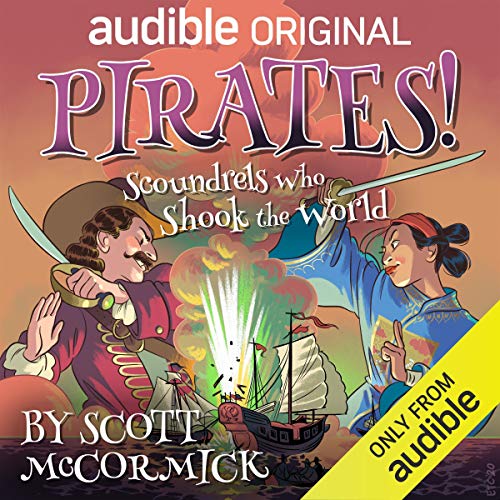 Pirates! Scoundrels Who Shook the World

Pirates! Scoundrels Who Shook the World

Exclusively on Audible, hilarious history for ages eight and up.

Hoist the mizzenmast and batten down those bloody hatches: Pirates! Scoundrels Who Shook the World tells the hilarious-but-true adventures of history’s most amazing pirates.

Learn about Stede Bonnet, the gentleman pirate, who left a life of luxury to become one of the most clueless pirates ever; Anne Bonney and Mary Read, two “openly female women” whose exploits turned them into media sensations; Jean and Pierre Lafitte, the Pirate Kings of New Orleans, who helped America win The War of 1812, and Ching Shih, the Chinese woman who rose from utter poverty to become the greatest pirate in history.

Pirates! has it all: swordfights, cannon blasts, parrot poop, daring acts of idiocy, bumbling British officers, and of course, plenty of booty. So buckle your swashes and swish your swords, Pirates! Scoundrels Who Shook the World is setting sail to the land of hilarity.

What listeners say about Pirates! Scoundrels Who Shook the World

I highly recommend this Audible production.
The information and performance are both outstanding.
It is a captivating “page turner”.

This is the first review on this amazing book. I have loved this whole series, from the 1st “Rivals!” book to “Pirates!” The narration is amazing, the writing is creative, and the sound effects “blow” my mind! The only bad thing is that there are not 15 more books!

A fun listening and a learning experience even if your adult. The cast had done a wonderful job and Scott Vaughan always delivers in his writings.

I really enjoy his writing style. It's a funny but interesting read. can't wait to get the next book

this was a really fun and educational piece of literature. the way they portrayed everything made it for really fun story to listen to. However listening to the history you also get to learn a lot about all the different figures piracy history including why they are the way they are. humanizes each of them instead of making them these strange figures from history. It shows you what circumstances came about to turn them into the people that they were but also show the Ingenuity of each of them. it goes to show that no matter what there's always two sides to every story. and also ties me personally to be more interested in researching them even further. Very well done

Short but sweet. I really enjoyed the performance. It reminded me of 'Horrible History' yet better.

A Fun introduction to Pirate History

I really enjoyed this book, not only gave a lot of interesting information, but also was a lot of fun. I appreciated how it talked about how gender played roles within piracy.

Scott McCormick gets it right once more with this witty historical dramatic work on pirates. All that plentiful researched work fits into one tight enjoyable ride that leaves you wanting more.

This was a very humorously performed and informative history lesson.
I believe if this format could be used for educational purposes learning would be a lot more fun 😄