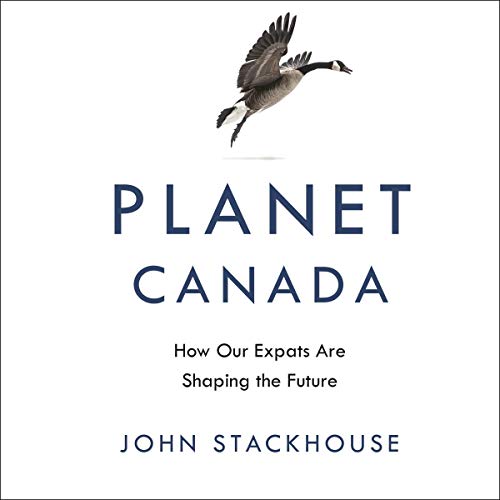 Written by: John Stackhouse
Narrated by: Jonathan Watton
Try for $0.00

A leading thinker on Canada's place in the world contends that our country's greatest untapped resource may be the three million Canadians who don't live here.

Entrepreneurs, educators, humanitarians: an entire province's worth of Canadian citizens live outside Canada. Some will return, others won't. But what they all share is the ability, and often the desire, to export Canadian values to a world sorely in need of them. And to act as ambassadors for Canada in industries and societies where diplomatic efforts find little traction. Surely a country with people as diverse as Canada's ought to plug itself into every corner of the globe. We don't, and sometimes not even when our expats are eager to help.

Failing to put this desire to work, contends best-selling author and longtime foreign correspondent John Stackhouse, is a grave error for a small country whose voice is getting lost behind developing nations of rapidly increasing influence. The soft power we once boasted is getting softer, but we have an unparalleled resource, if we choose to use it. To ensure Canada's place in the world, Stackhouse argues in Planet Canada, we need this exceptional province of expats and their special claim on the 21st century.

“Planet Canada is an enthralling guided tour through the uncharted lands of Canada’s ‘undeclared 11th province.’ This missing piece of our population has an outsized influence on the shape of the world and, potentially, the fate of our country - yet it was nameless and undocumented until John Stackhouse embarked on this extraordinary journey through its workshops, concert halls, executive suites and laboratories, revealing a second Canada that is both a missed opportunity and a potential storehouse of future success.” (Doug Saunders, best-selling author of Arrival City and Maximum Canada)

“John Stackhouse is an eminently wise and thoughtful observer of Canada’s place on the world’s stage. In Planet Canada, he offers a nuanced analysis of how the Canadian diaspora is capitalizing on their uniquely Canadian qualities and makes a case for us, as an evolving middle-power nation, to make the most of them.” (The Right Honourable David Johnston, Canada’s 28th governor general)

“In Planet Canada, John Stackhouse motivates us to rethink the axis of our globetrotting expats, and makes a compelling case for ensuring that the right structures are in place towards achieving the desired ‘boomerang effect,’ ultimately leveraging our diverse diaspora as a fundamental Canadian asset.” (Nurjehan Mawani, Distinguished Canadian civil servant and diplomat)

What listeners say about Planet Canada

Nice overview of Canadian expats, their importance, and the government's viewpoint or lack of vision

Stackhouse has an interesting take on the future of middle powers (mainly Canada) in an increasingly technological and globalist world. I would highly suggest it to any Canadian who is thinking of a career change or have kids in high school trying to figure out their future.