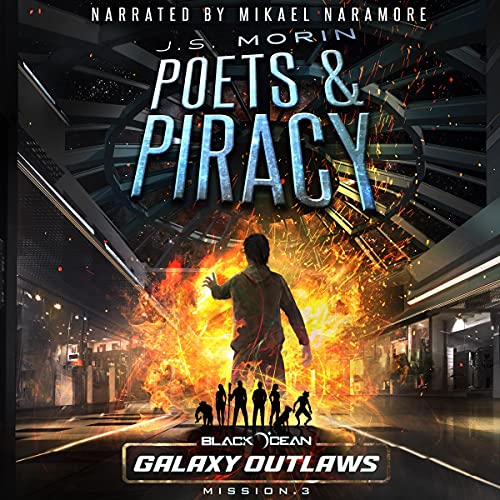 Written by: J.S. Morin
Narrated by: Mikael Naramore
Try for $0.00

When the crew of the Mobius takes on passenger Bryce Brisson to make some easy money, they find themselves caught up in his business dealings with Tanny's estranged family: the Rucker Syndicate. On top of that, Tanny has exhausted her supply of the drugs she needs to keep up her enhanced marine physiology. But will Carl double-cross family to make his payday or dive headlong into a trap that wasn't meant for him? If he plays this wrong, he risks making enemies of the most ruthless gangsters on Mars.

Poets and Piracy is the third mission of Black Ocean, a science-fantasy series set in the 26th century. Do you wish there had been a second season of Firefly? Do you love the irreverent fun of Guardians of the Galaxy? Have you ever wondered how Star Wars would have turned out if Luke and Obi-wan had ditched the rebellion to become smugglers with Han and Chewie? Then Black Ocean is the series for you!

Download Poets and Piracy, and remember whose side you're on.

What listeners say about Poets and Piracy