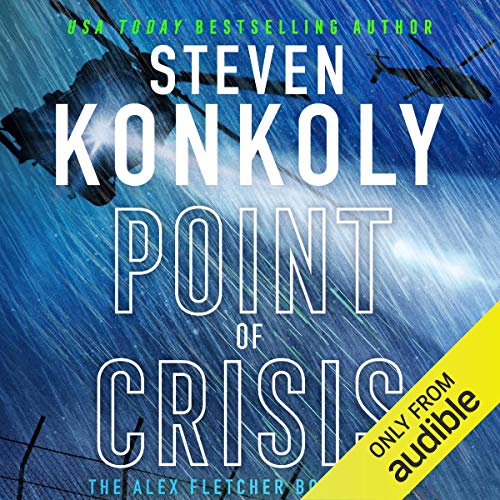 In the aftermath of the brutal attack on his family compound, Alex Fletcher embraces his rapidly expanding role within the New England Regional Recovery Zone (RRZ).

Fueled by a limitless drive to protect his family and a rekindled sense of duty, he enlists the reluctant aid of a local militia commander - to ease the public's fears of a federal government takeover.

As Captain Fletcher digs deeper into the government's plans, he starts to question the federal government's intentions - and ability to stabilize the situation in New England. With the region's critical infrastructure destroyed and the nation's electrical grid crippled, he foresees a human cataclysm, with several hundred thousand desperate refugees marching further north through Maine.

The bad news doesn't end there.

Alex discovers that Eli Russell has rebuilt his militia - with the intention of hastening the Regional Recovery Zone's downfall. Obsessed with stopping the deranged psychopath that attacked his family, Alex scours the back roads and rural towns of Southern Maine to find him - unaware that Eli's plans are far more personal.

With the world swiftly unraveling around him, Alex will face his most difficult decisions ever....

What listeners say about Point of Crisis

How did Book 3 go so wrong?

I enjoyed the first two books of the series. The story and events were believable and the books flowed well. In Book 3 we have another disaster that nearly wipes out the infrastructure of the East Coast. Rather than a continuation of the struggles that Alex and his family would face, we are presented with the implausible tale of how the Federal government would seek to use small, under trained, ill-equipped local militias to secure the population. It just did not ring true at all. Why bypass the State, County, and local Police organizations let alone the many fire departments, Red Cross and other first responders.

It seemed the author wants to weave a story of how substantial the militias are rather than construct how a real disaster would play out. The constant hints that Homeland Security was out to rob Americans of thier Open Carry Righrs became boring. Yet the author saw no contradication with the militias denying fellow Americans the freedom of assembly and movement. Of course in a emergency that leaves millions without power, food or water, security forces would be expected to disarm people carrying and bruising weapons in their vincity. But the author sees that as some conspiracy to deny Americans of their essential rights while ignoring the millions who face disease and starvation and denies them the freedom to move to safer ground.

Good book if you believe paranoid militia members are there to save us when disaster strikes. It would have been so much better if the story was cast in the more believable light of a Federal response that worked with already in place law enforcement and disaster relief organizations. It seems the author had an agenda to push and the story suffered because of it. But if see black helicopters around every corner than you may like Book 3.

Well written with a great blend of plot development and action, the third book in the “The Perseid Collapse” series offers a glimpse into how the US might try and recover after a significant collapse in infrastructure. Mr. Konkoly does a great job of painting an all too realistic possibility of high amounts of government oversight combined with the lawlessness of a post-apocalyptic world. The story wraps up the series nicely but also leaves room for the author to come back and rejoin the fletchers as some point in the future.

The narrator does a great job bringing all the characters to life and does well with the New England Accent.

Disappointing compared to the 2 great books leading up to it.

Could you see Point of Crisis being made into a movie or a TV series? Who should the stars be?

No movie for this...others yes.

started to read the first book it kept me on the edge of the chair could not put it down. enjoying this 4th book.

Steven takes a good swipe at a hypothetical World War 3 scenario. His knowledge of technology and today's military appears exceptional and makes the story hard to put down.

Drawn out and red tape montage

Wow very drawn out and limited in what made the other books interesting. Misses action and focuses on red tape of reestablishing government post event. Was painful to listen

They should have stopped with book 2

I like the first couple of books in the series. But the plot has gotten thinner and the story less believable.I wouldn't say it was a waste of time, but I wouldn't recommend reading this one.

The books are a great story concept, but contain far too much technical jargon. I have to listen to sections more than once to get the story line. However, I am so caught up in the characters I continue to slog thru it. And I want to listen to the next series, just dread the technical aspects.

One of best post apocalypse stories I have read!

Would you listen to Point of Crisis again? Why?

Certainly. The story is believable and well written and very well performed.
I enjoyed the entire series and look forward to hearing more about Alex Fletcher and his family.

What does Davis Sound, LLC bring to the story that you wouldn’t experience if you just read the book?

He seamlessly transitions between characters.

I love you, more!

One of the best written post apocalypse stories I have read to date (and I have read a lot of them). It was realistic. I enjoyed the characters. People get hurt.
The survivors are always thinking and working on their survival.

This one was definitely not up to expectations, could have skipped it and nothing would have been lost. I'm sure the prologue of number 4 will summarize this entire book. Just didn't have the excitement of the others in this series, did not hold my interest. I'm fine with the military strategies and maneuvers as an integral part of the story but not when it's 90-95% of the book. Maybe I missed something along the way, but very little time was spent on what was happening to the families, neighbors and friends, what about their thoughts and feelings, etc? Couldn't wait for the end so I could scratch it off my list and move on to another novel. Taking a short break from starting on the final book in this series, I certainly hope it's better than this one.