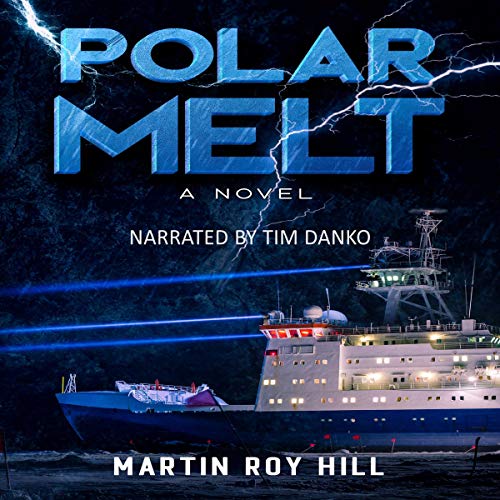 They call it simply "the object."

It sits at the bottom of the Arctic Ocean, waiting.

An American research ship disappears in the Arctic's Chukchi Sea only to reappear a few days later. When a special US Coast Guard unit boards the vessel, they find it deserted, its power grid wrecked, two bombs waiting to explode, and an even darker secret hidden below her decks.

A few miles across the international maritime boundary, a massive Russian oil platform harbors its own secret. Below the behemoth lies a mysterious energy source so powerful it threatens to topple the balance of world power in favor of Moscow.

The Russians will to kill to protect it. The Americans will kill to stop its recovery.

"Martin Roy Hill's Polar Melt is the fast lane to the headlines of the future. Fasten your seat belts and hang on! You're in for on a wild ride." (G. M. Ford, author of the Leo Waterman series)

What listeners say about Polar Melt

I was enthralled with this book from the opening paragraph to the end. Once I started it, I had to finish. I found the setting to be unusual as it was placed in the Arctic Sea. I enjoyed the twists and turns that made up the plot. I really liked the characters that made up the special Coast Guard unit. I am interested in more books about them. I recommend this story to others who enjoy this genre. Tim Danko's narration was entertaining and kept my attention. I was given a free copy of the audiobook and I have voluntarily posted this review.

This is the best audiobook I've listened to this year.
A tense thriller that grabbed me and held me till the very last word.
It is a great storyline and plot.
I will be looking for more from this author.
Coupled with superb narration.
I received a free copy of this audio book at my request and voluntarily leave this honest review..

*This book was given to me by the author at my request, and I provided this voluntary, unbiased review.*

While I do enjoy a good military strike/Tomy Clancy type thriller, this one felt flat for me. I do feel that it was well-written and the plot was interesting enough, it just wasnt for me. As such, I left a fair rating for what I felt was true to what the rating should be rather than a biased rating. I may not be interested in this line of books, but I would definitely recommend this author and book to fans of this genre and style.

This is a solid sequel to the Amazon Code. There are however a bunch of new characters whose motivations are meant to be mysterious... but it makes them oddly 2-D. There’s as much action as can be had in a single station with cold outside. Overall though it answered a bunch of questions raised in the Amazon Vode, it was way too long for its plot with a bunch of seemingly pointless “have to get from Ato B” drama and gun battles.

I think this is the end of this series for me.

I received this audiobook for free in exchange for a review.