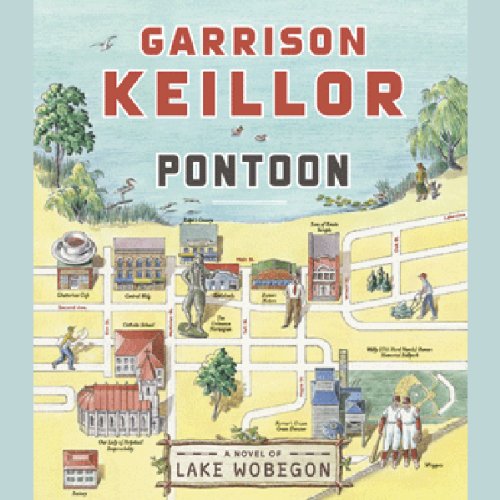 Garrison Keillor's latest book is about the wedding of a girl named Dede Ingebretson, who comes home from California with a guy named Brent. Dede has made a fortune in veterinary aromatherapy; Brent bears a strong resemblance to a man wanted for extortion who's pictured on a poster in the town's post office. Then there's the memorial service for Dede's aunt Evelyn, who led a footloose and adventurous life after the death of her husband 17 years previously. Add a surprise boyfriend and a band of newly arrived Mormon missionaries, and the gently rendered chaos is complete.
©2007 Garrison Keillor (P)2007 HighBridge Company

"There's plenty of fun to be had with the well-timed deadpans and homespun wit." (Publishers Weekly)

Did the person who wrote the "publisher's summary" even read the book? Definitely not. First of all, it is not about "Dede" (or Debbie as she is really called in the book), it is really about Evelyn (who is NOT Debbie's aunt. No relation) and her life/death/family/town/bowling ball. There were NO mormon missionaries, only Lutheran pastors from Denmark who were being sent on a tour of the USA to get them out of their Bishop's hair. It is terrific Garrison Keillor, I give it top marks. However, those looking for Mr. K's lightheartedness and endless chuckles, need to know that this one is dark. Terrific , but you will be crying more than you are laughing. As a former Midwestern Lutheran I certainly did. Very real characters. Very well done. Read by GK, as no one else could really do it justice. Check a synopsis somewhere else, though since Highbridge Audio couldn't bother to get someone to write one properly.

I had to rewind and listen again a few times to follow the whacko story but it ends up amusing even if you don't catch every thread. Typical Keillor, but not his best. I enjoyed the northern midwest absurdity of it all. A few great laughs are always good for the soul.

Those of us who've been listening to PHC for several decades recognize as familiar old friends pretty much every thread in this story, but we don't mind. It's the human condition. Some people complain about Garrison's deadpan delivery on this audio book, but not those of us who love him...his mere voice reminds of us a generous, quirky view of life that comes along with it.

If you like Gerrison Keillor you will like this story. He goes into much more detail of his characters than on his weekly raido program. I could listen to him tell stories all day long.

An enjoyable look at life in a small town.

I put off listening to this because I've listened to Garrison Keillor before, and although I have enjoyed him, I've been into more action/adventure lately and planned to listen to another one. While scrolling through my Audible books I ran across "Pontoon" and decided it was time for a change of pace. I'm so glad I did. Life in Lake Wobegon is quite interesting. The characters are carefully drawn and make you feel like these are people you could know. It was sad, happy, and funny. If you ever lived in a small town, this will bring back memories of those days. However, it is a story anybody can immensely enjoy. Loved it.

"there are no answers, just stories"

Garrison Keillor's Pontoon (2007) is a novel whose chapters read like a linked set of short stories focusing primarily on the death of 82-year old, life-embracing Evelyn Peterson and its effect on her surviving family and friends and secondarily on the return to Lake Woebegone of "that tramp" Debbie Detmer for her quasi-wedding "commitment" ceremony. Keillor tells his tale via the memories, letters, back-stories, and current concerns, etc. of a variety of characters, including Evelyn, her lover Raoul, her daughter Barbara (the protagonist of the novel), Barbara's university sophomore son Kyle, Debbie, and Debbie's father.

Lake Woebegone is a largely Lutheran and muchly Norwegian Minnesota small town, and Keillor depicts both its negative and positive sides: it's "a culture of fussy women and silent angry men and horrified children," but "It's peaceful here. . . you can be just who you are." Keillor enjoys lists (varieties of booze being dumped gurgling down a sink drain, garage sale items spread out on card tables, and so on). He loves people, especially quirky ones, humorously, ruthlessly, and sympathetically exposing their foibles, fears, aspirations, delusions, disasters, and memories. His riffs on his fictional characters make them feel real. He makes the idiosyncratic natural and the typical interesting. He expresses much seasoned wisdom on families, marriage, religion, and life.

Keillor's tone, established by the first line of the novel ("Evelyn was an insomniac, so when they say she died in her sleep you have to question that"), is wry. And his humor can sting, as when Barbara contemplates Branson, Missouri, "a geezer resort, where the face-lifted stars of yesteryear go on singing their hits, like demented robots, eyes glazed, a sort of mortuary of pop music." But usually his targets deserve a little zinging, like Barbara's old classmate Marcy, "one of those mean women who developed hugging tendencies late in life, as if that made up for everything." Keillor's humor may attain an oddly affecting numinous counterpoint, as in his description of a statue in a grotto: "A dog lay at the end of his chain, his chin on the ground, pawing at the grass in front of a bathtub half-buried vertically in the ground, the half above ground forming a little grotto for a statue of the Blessed Virgin, arms outstretched, pity in her blank eyes. He had pawed a bare spot at her feet. A dog's homage." And he is a master of the savory, apt line, as when he mentions a radio baseball announcer's voice sounding "like a string of taffy, stretching" on a day marked by "A heavy air of Sunday boredom. Benign, indifferent, dozy."

Perhaps the climax, involving an aging pontoon boat, a pair of giant fiberglass pedal-powered duck decoys, a hot air balloon, a speed boat, a homemade parasail, a bowling ball on a chain, a naked young man, a malodorous dog with a wet, cold nose, and 24 tipsy agnostic Danish Lutheran pastors, is a stretch too far and a touch too contrived, and perhaps Keillor indulges in a wee bit too much eccentric minor character history (as when he has a parachuting Elvis impersonator recount his life story, beginning with killing his best friend in a youthful hunting accident and climaxing with being grabbed by the first President Bush's bodyguards), but overall his style and vision are pleasurable to imbibe, and he is capable of intensely moving revelation.

Some words about the audiobook read by Keillor. His reading is idiosyncratic, savory, appealing. He pauses where pauses wouldn't ordinarily be: "her old suede [pause] jacket" and "For he shall feed his flock [pause] like a shepherd." Or, less often, he speeds through places where pauses ordinarily would be: "Barbara is somewhat tightly wound, not the person you'd choose for the job of finding dead people. [no pause] She shrieked, she clutched at her mother's hand, shrank back from the body, knocked a lamp off the bedside table, yelped, ran out of the room into the kitchen where she tried to collect herself, and took a deep breath and thought 'homicide' and looked around for signs of violence." He drawls downward the last syllables of the last words in phrases, not unlike a deeper-voiced, bucolic Bukowski: "a hubcap for an ASHtraaaaay." Keillor can purr along in his own rhythm (sometimes independent of his own commas and periods) because he is the Writer reading his Work and he knows what he's doing and it works. Short piano pieces aptly and pleasingly close each chapter.

I enjoyed this, the first book by Keillor I have read, and recommend it to people who like humorous and moving tales of eccentric, flawed, and sympathetic denizens of American small towns.

Would you consider the audio edition of Pontoon to be better than the print version?

What does Garrison Keillor bring to the story that you wouldn’t experience if you just read the book?

His voice. I love it! Also, I feel as if hearing an author read his or her work allows the listener a better understanding of the author's intended style and tone.

I am a loyal G. Keillor fan and Pontoon was satisfying in all the ways I expect his books to be.

Keillor takes us on a wild and hilarious ride with characters who feel like people from my own home town. I smiled through the whole thing and laughed so hard I cried at the crazy and joyous end! At turns amusing and sweetly sad, this book left me feeling like I had just spent time with an old friend who had caught me up on the "goings on" back home. I can only hope someone picks up the movie rights - I'd love to see this on the big screen!

Typical Garrison Keillor -- if you're a fan you'll like this one. Not necessarily for a road trip with the kids, though, due to discussions of sex and death. I really enjoyed it, and laughed out loud a number of times. Even though the end is predictable, the buildup to it is enjoyable and fun. I'll listen to it again.