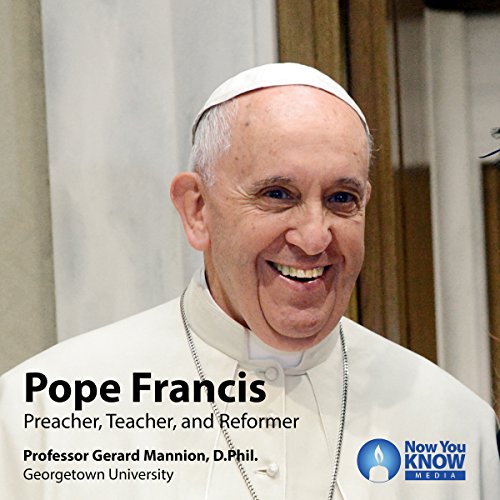 Meticulously researched and brilliantly taught, this course is a rare opportunity to learn about Pope Francis from a leading Church historian. On March 13, 2013, the world watched as white smoke billowed from the chimney of the Sistine Chapel and the words habemus Papam rang through St. Peter's Square.

The crowd was taken aback as Cardinal Jorge Bergoglio became the leader of the world's largest religious community and took the name of Francis - a name that no other pope had ever chosen before. The surprises would not end there, as Pope Francis would usher in great reforms and change. Now, in this 12-lecture course, you will explore the powerful ways in which the Church has changed under its new shepherd. Your guide is Georgetown professor Gerard Mannion (DPhil, University of Oxford), whom Richard Gaillardetz calls "one of the most energetic and incisive voices in Catholic scholarship today".

You've heard his inspiring words - now, this course will bring you behind the headlines to truly understand how Pope Francis became the leader he is today. First, you will meet Jorge Bergoglio, the man who became Papa Francesco, before exploring how and why he is transforming the Church. You will then delve into his powerful vision and priorities for the Church and world, before assessing this ecclesial revolution thus far, considering what the future might hold in store.

With relentless energy, Pope Francis has transformed the Catholic Church's organization, missionary outlook, and relations with those of other faiths. And most importantly, his vision has led to a renewed sense of hope and positive energy radiating throughout the Church. Discover the power of his vision today.

"I enthusiastically recommend Gerard Mannion's series on Pope Francis. You will enjoy every minute listening to one of my favorite scholars speaking about this fascinating pope who has caught the attention of the world." (Rev. John W. O’Malley, S.J., Georgetown University, Department of Theology)

What listeners say about Pope Francis: Preacher, Teacher, and Reformer