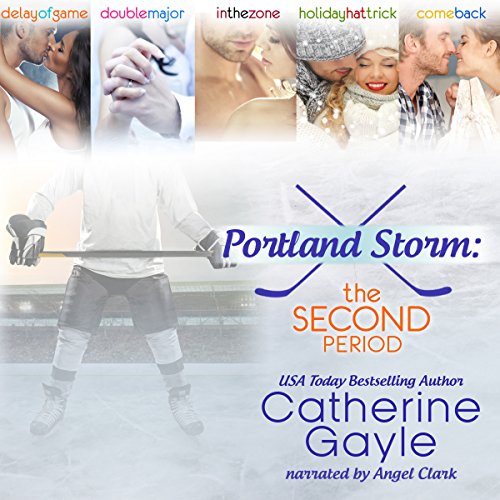 With her father's health in question, Sara Thomas is focused on reducing his anxiety. That's no small feat considering his high-stress job. Everyone knows Sara's single; no one knows she's pregnant. There's never a good time to unexpectedly get knocked up, but now is not it. But when Jonny, one of her father's players, seeks vigilante justice on the ice, everything gets tossed out the window.

It's the NHL's draft day, but the whole Portland Storm team is back together for an entirely different event. Complete with a double wedding, an unanticipated guest, overdue apologies, unexpected goodbyes, and fresh starts, this big day has the potential to get them all called for a double major.

It was supposed to be a night of fake names, half-truths, and anonymous sex. Keith Burns, star defenseman for the Portland Storm, was just looking for a way to pass the time. Brianna Hayden wanted to find herself after health issues changed everything. Anonymity is the name of their game; the rules were laid down at the outset. A chance encounter brings them back together long after the game should have ended, shattering their initial rules.

When he arrives on Mia's doorstep, things don't go as planned. With her whole family gathered for the holiday, the only way he can be with their daughter is to spend time with them all. He's still in love with Mia, but she won't take him back.

Nicklas Ericsson was a star goaltender with the Portland Storm, until his addiction changed everything. Nicky's run out of options, and now his sister and her children are in Portland. They need help he has no clue how to provide, though, and figuring it out might derail all the progress he's made.

What listeners say about Portland Storm: The Second Period

You need this in your Collection... Seriously.

First I loved book one I just didn’t like the narrator in that one. But these narrators way better really brings out the stories. Also being a Winnipeg girl it is totally freaking awesome to read/listen to a book that is about my home town.

Delay of the Game 3.5 Stars

Ok I don’t want to give too much away with this review and it would be easy to do. Cam strong silent type, he falls for the head coach’s daughter Sara. Sara is in a bit of a pickle, and Cam wants to step up to the plate and help her through it. Coach has a pretty bad heart attack and has to undergo major surgery.
Cam and the rest of the team step up to help take care of Coach and Sara after she has a mishap of her own. Cam and Sara have to work to figure out how their relationship will work with everything going on.
Ok I think I did good without giving to much away read this book!

Omg a double wedding!! I loved this novella we get to see all our favorites and see what they are up to and what they are getting up to. It’s a wonderful addition to the series.
Dana & Eric I loved getting to see them get there HEA, I was a little confused with some of it because I didn’t read book 2 or 3 and didn’t know that Brenden and Rachel were together or even getting married so that was news.
I have to say it was still great to see how everyone is doing and give some hints of what is to come in the next book.

Oh this was HOT… 4 stars baby
A one night stand that doesn’t stay at one night oh no it doesn’t.
Keith is battling some pretty heavy guilt for things of his past he can’t choose. I think what gets him the most is he can’t atone for what he had done. It’s eating him up inside.
Brianna doesn’t see herself in a very favorable light at all. Her ex dance partner really did a number on her and she just continued to do it to herself as well.
Her one night affair with Keith who was to be a no names no nothing just hot affair. Things did not turn out that way at all. They start to become friends and lovers and Keith starts to break down her walls about her weight and how she sees herself. And Brianna and the help of his brother help Keith to see that sins of the past don’t define his future.

It’s a story of these 2 overcoming things they cannot chance and moving forward I really enjoyed this book and look forward to the next.

I think I liked this novella best.
Mitchell and Mia divorced. But they both love each other but life is in the way. They have agreed to joint custody of their daughter.
Mitch wants to spend the few days off he has with Marley his daughter but it’s unexpected to Mia. So to make everyone happy she invites Mitch to go with them to her parents’ house for the holidays with them.
Mia’s family loves Mitch and wants them back together so Mia and Mitch find themselves with one another alone a lot and things start to get resolved……
How do you say goodbye when you still love the one you want?
I <3 this book! 5 stars

I think I was most looking forward to this book but it wasn’t what I was expecting
Nicklas is coming back from his heavy addictions, but learning his sister has ALS and just going through his father’s death with ALS he needs to be strong for his sister and be there for his niece and 2 nephews. Who already lost their father in combat they are about to lose their only living parent and moved to a new country.
Jessica is the VP of a non-profit who has had a past that took her from one addict’s home to another. But there is nothing she can do but all for Nicky. But with Nicky comes the heart ache of losing his sister and stepping up to me mom to his niece and nephews.
This story broke my ever loving heart. It was raw and emotional and makes you wish you could just hug them all.
Would give this story 4 freaking heart breaking stars.

I have become enamored by the recent phenomenon of writing serial romances that build on characters from book to book. This series is one of good substance and character development. I will recommend this set to anyone looking to get the most of a credit although the previous books in the series should ideally be read first to broaden the view.

Get lost in the moment...

Gayle celebrates life and love in all it's heartstopping glory. From good times to heartache the Portland Storm team are learning how to be a family and taking readers along. Clark pulls every last drop of emotion out of this powerful collection. How can you not get lost in the moment?

The stories flow well together and the narrating is perfect. Her voice helps me to picture the characters and really adds to the experience.

The Portland Storm is always a winner!!

What did you love best about Portland Storm: The Second Period?

I have already read the print books (e-reader) but I love to have audio for trips and work. I like to hear the different voices and inflections used in and audiobook compared to what I used in my head when I read.

This is really hard when we are talking about 5 different books, but Catherine Gayle (in my opinion) has not produced a character I haven't loved. A really long way to say I love them all.

I wanted to and almost did since I have this on my phone and am able to take it with me everywhere. Portability is great :-)

I will purchase any of the Portland Storm books and the Tulsa Thunderbirds books by Catherine Gayle.

What made the experience of listening to Portland Storm: The Second Period the most enjoyable?

the hockey is spot on......Very true to Life

The whole series is great, each separate story was fun and fast paced

as much as you'll want to listen nonstop.......it's just too LONG

Can't wait for the next four stories to get to Audible.....HURRY up!!!!

Another great success by Catherine Gayle!

I loved catching up with all the players in this series. These stories keep up with the standard of The Portland Storm. I consider these books a must read/listen series. Mitch and Mia have a sweet story. I couldn't help but fall in love with them. It gets better with Cam and Sara. He treats her with such love and kindness you can't help but fall for him. Keith absolutely stole my heart. He was so wonderful to Brianna while helping her accept herself and prove that she is beautiful and talented. Jessica and Nicky have a heartbreaking story. He struggles with addiction and then with his sister's illness. He becomes such an amazing man. These stories cover so many difficulties. Stress, ALS, addiction,body image., suicide and homophobia just to name a few. They are truly stories of overcoming obstacles and inspiration. You can face horrific tragedies and come out ahead. Even get your happily ever after. The audio for this was awesome. I really loved listening. I didn't want to put it down. You won't be disappointed!!