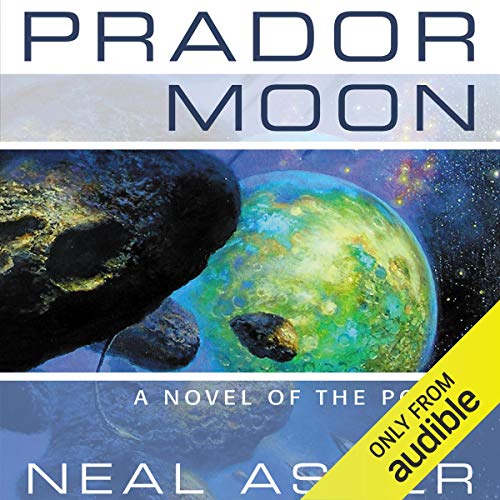 Written by: Neal Asher
Narrated by: David Marantz
Try for $0.00

Neal Asher takes on first contact, Polity style. This original novel recounts the first contact between the aggressive Prador aliens, and the Polity Collective as it is forced to retool its society to a war footing. The overwhelming brute force of the Prador dreadnaughts causes several worlds and space stations to be overrun.

Prador Moon follows the initial Polity defeats, to the first draws, and culminates in what might be the first Polity victory, told from the point of view of two unlikely heroes.

What listeners say about Prador Moon

Easing into Asher on Audible

There will never be another Iain M. Banks. That said, one book into Asher's opus and his Polity is satisfying my hunger pangs for Banks' Culture. Throw in some voracious aliens with interesting cultural backstory, plausible characters (including AI), and teleportation technology, and I'm engaged enough to head into the next book in the chronology (by fictional timeline, not date of writing): Shadow of the Scorpion

So far, Asher is showing promise to fit into my Banks, Reynolds and Vinge space opera cabinet nicely.

I did get a little lost in the sections describing the operation of the teleporters (known as "runcibles") via human/tech interfaces called "augs" but this may be more of a feature of audio - which I almost never rewind in contrast to a paragraph or two I might re-read - rather than any failings in Asher's concept or style.

The narrator neither lulled me to sleep (a real risk with audio books) nor irritated me. That's a thin needle to thread and merits recognition.

You've got my attention, Asher. Let's see where this goes...

good, but for a very distracting pronunciation

the narrator could not pronounce "Occam's Razor," to save his life. It is bewildering that no one on the production staff didn't stop him and say "hey, fyi, you're saying that 100% wrong!"

The Narrator mispronounced many words, including words an average high school student should know. In particular, he mispronounced words that are often found in science fiction in general and words that are in particular an integral part of the detailed universe that Asher created. In addition, the narrator displayed no acting ability; no ear or skill with differentiating voices; and no sense of pace, timing or nuance. Most non professional writers do a better job reading to their children.
At first, I was stunned. Then I blamed the horrible narration on the narrator’s unfamiliarity with Science or Science Fiction. But then I realized it was just a lack of general knowledge that any mildly inquisitive reader should know. Who, after all, has not heard of Occam's razor? In this novel there is a spaceship with that name (although probably “Razor.”) Every time the narrator butchers the name, it’s like fingernails scraped on a blackboard.
At first, I wanted to blame all the problems of “Prador’s Moon” on the narrator. But isn’t there a producer in the control room? Doesn’t an editor have to listen to the production? Doesn’t the author or at least one of his representatives bear any responsibility for checking the work?
The many, many, MANY faults of the narrator detracted greatly from my enjoyment of the production. I continued to listen, because I have read (or listened to) several other works by Asher and knew these were not his mistakes, and I know that he produces quality fiction. If this had been my first Asher book, I would have returned it.
It’s difficult to judge the actual merits of this book apart from the distracting narration. But in brief:”Prador’s Moon” has all the merits of most of Mr. Asher’s work and all of the faults. It has fine, detailed world building, and BIG important ideas set on an epic scale. It does NOT have enough character building or differentiation, and suffers from a lack of interpersonal relationships. Prador’s Moon has a gross excess of minutely described violence and gore, and a panoply of confusing space battles where just a little more clarity would have helped.
Aside from a cocktail or two, Prador’s Moon does not reveal any hint of the free time, fun, enjoyment, and recreation that humans are able to find in all but the most extreme of circumstance.
Peter F Hamilton is my clear cut favorite for epic “space opera” sci-fi writing. Despite my nit-picking, Asher is also one of my favorites, though I am just beginning the “Polity” series. I enjoyed Asher’s “Owner’s Trilogy” with many of the caveats raised above.
I wish more authors had the strength, imagination, and endurance to take up these big ideas and big stories.
Thanks for your time,
And thanks to Mr. Asher for his.
All the Best
Glenn
PS To Audible: please have a Sci Fi fan, someone with a college education, or anyone who knows good story-telling listen to each audio book. There is no excuse for a “professional” narrator to mispronounce words, have a flat emotionless voice, and not seem to have any idea of what is happening in the book he/she is reading. I have listened to several hundred audio books and this was by far the worst narration I have ever endured.

Polity / Prador in a 'pp' contest

Neal Asher's Prador Moon describes the initial contact and subsequent 'war' when the Polity, the Earth originated societal / governmental entity that is mostly AI with a liberal sprinkling of humans meets an intelligent alien race, the Prador. With first contact, the Prador pull no punches and initiate the war to obtain Polity technology. Two augmented humans play a central role in the Polity's rapid pivot to a war posture, all while battling an internal separatist movement that believes the Prador offer them the opportunity to shuck off their AI overlords.

While Asher's main focus is on human augmentation, he spend less time with the AI entities themselves. The alien race, the Prador, is a bit disappointing as they are basically anthropomorphized crabs with a social order designed around cage matches and the boss from hell. Along with their total lack of any morality concept and sadistic streak, it's hard to envision how they've managed to ever reach the stars.

The narration is reasonable with moderate character distinction. Pacing is fine for this relatively short offering.

Having read this novel after previously reading the three Spatterjay series books by Asher, it's unfortunate that this decent story is by comparison, made to feel underdeveloped and linear. It has plenty of ferocious action and exotic alien species which are the hallmarks or his writing, but too few parallel converging narratives and plot twists that I have come to expect after those more refined works. While the story's climax had a clever surprise that I found rewarding, it felt like a few more would have been welcome along the way.

the narrator constantly pronounces words incorrectly, its irritating and distracting but possible to get past.

Sci-fi is my lens of choice when it comes to story telling. The characters this book do not have depth. You struggle to find their personal motivations in between the lines of the story. I really wanted a galaxy spanning series with multiple books but if I can't find a driving force I lose interest very quickly. Made it about half way through before having to shelve this one. Interesting concepts but hard to sift through.

And the search for scifi without the sophomoric need to shoehorn sex in order to make up a world where Christian sexual morality doesn't exist....continues.

Puerile, graphic, sexual deviancy dressed up as either humor or normative.

Nothing incredible. Certainly no Peter F. Hamilton. But it was enjoyable. I will move on to the next one.

Voice acting was fine enough. The story has lots of mathematical details that are easy to blur through, but they tie all together in a worthwhile and satisfying conclusion. Definitely looking forward to more books in the series.