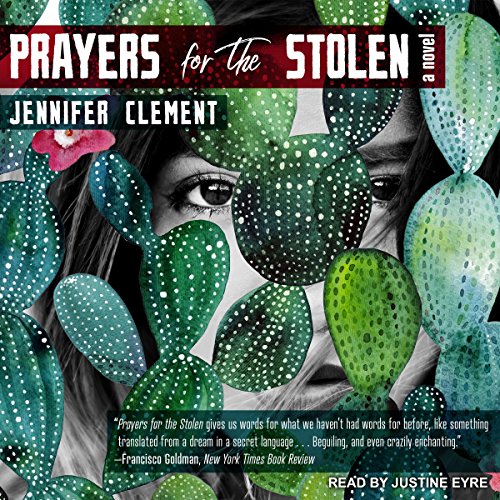 Prayers for the Stolen

Written by: Jennifer Clement
Narrated by: Justine Eyre
Try for $0.00

Ladydi Garcia Martinez is fierce, funny, and smart. She was born into a world where being a girl is a dangerous thing. In the mountains of Guerrero, Mexico, women must fend for themselves, as their men have left to seek opportunities elsewhere.

Here in the shadow of the drug war, bodies turn up on the outskirts of the village to be taken back to the earth by scorpions and snakes. School is held sporadically, when a volunteer can be coerced away from the big city for a semester. In Guerrero, the drug lords are kings, and mothers disguise their daughters as sons, or when that fails, they "make them ugly" - cropping their hair, blackening their teeth - anything to protect them from the rapacious grasp of the cartels. And when the black SUVs roll through town, Ladydi and her friends burrow into holes in their backyards like animals, tucked safely out of sight.

While her mother waits in vain for her husband's return, Ladydi and her friends dream of a future that holds more promise than mere survival, finding humor, solidarity, and fun in the face of so much tragedy. When Ladydi is offered work as a nanny for a wealthy family in Acapulco, she seizes the chance and finds her first taste of love with a young caretaker there.

What listeners say about Prayers for the Stolen

I don’t know how to feel about this...

The narrator really threw me off because her voice and accent didn’t make any sense as the voice of the main character. I struggled with her voice throughout the book. Another thing I didn’t like was that there were times when it was unclear whether she was talking about the past or the present which was confusing and that’s one of my pet peeves. However, the story was very sad and the lives of the characters were very tragic. In the end the author gives insight about how these are very real stories and things happening to women in Mexico. Even though I did not enjoy listening to it majority of the time, by the end of it I had found somewhat of an appreciation for the story being told. I think she’s spreading awareness which is always good but I think it could have been executed much better.

This is a great book that I think anyone should read or listen to. I just have a complaint about the pronunciation of two very important words in Mexican culture. These words kept being miss pronounced, and as a Mexican it really triggered me :/
The word Guerrero was pronounced as güerrero, and the name of the Virgin of Guadalupe was pronounced as Virgen of Guadaloop. I feel this was a very simple mistake that caught on the moment would have avoided me wincing every time I heard it.

This book was just okay, the accents the narrator used were atrocious and made it hard to focus on the story.

I read this book when a was a teenager and fell in love with it. After several years I found it here and wish it had more attention! This book is tragic, deep, and an amazing read that makes you root for this unfortunate girl. It’ll bring tears to your eyes but give your heart a few squeezes, I highly recommend it!

Narrator did a great job with the story. It's a super sad story about a girl in Mexico and her existence. They live an hour outside Acapulco in the jungle. Cartel men are sent in to take the young girls and use them for whatever purpose they'd like. The whole trajectory is dismal and doesn't leave you with much of anything you can do about the situation.

Very detailed, good-fair. Really expected a better ending. I may read more of her books.