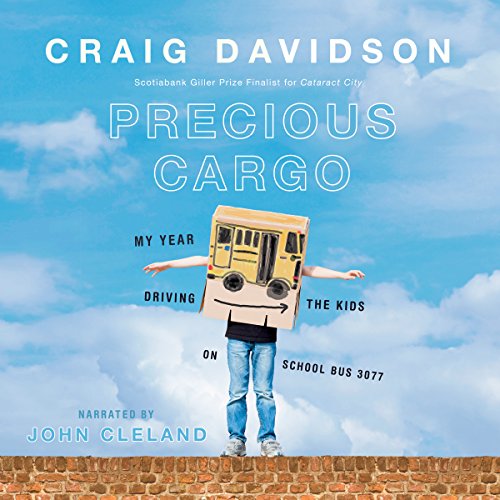 Written by: Craig Davidson
Narrated by: John Cleland
Try for $0.00

For listeners of Kristine Barnett's The Spark, Andrew Solomon's Far from the Tree, and Ian Brown's The Boy in the Moon, here is a heartfelt, funny, and surprising memoir about one year spent driving a bus full of children with special needs.

With his last novel, Cataract City, Craig Davidson established himself as one of our most talented novelists. But before writing that novel and before his previous work, Rust and Bone, was made into a Golden Globe-nominated film, Davidson experienced a period of poverty, apparent failure, and despair. In this new work of riveting and timely nonfiction, Davidson tells the unvarnished story of one transformative year in his life and of his unlikely relationships with a handful of unique and vibrant children who were, to his initial astonishment and bewilderment and eventual delight, placed in his care for a couple of hours each day - the kids on school bus 3077.

One morning in 2008, desperate and impoverished while trying unsuccessfully to write, Davidson plucked a flyer out of his mailbox that read, "Bus Drivers Wanted". That was the first step toward an unlikely new career: driving a school bus full of special-needs kids for a year. Armed only with a sense of humor akin to that of his charges, a creative approach to the challenge of driving a large, awkward vehicle while corralling a rowdy gang of kids, and unexpected reserves of empathy, Davidson takes us along for the ride. He shows us how his evolving relationship with the kids on that bus, each of them struggling physically as well as emotionally and socially, slowly but surely changed his life along with the lives of the "precious cargo" in his care. This is the extraordinary story of that year and those relationships. It is also a moving, important, and universal story about how we see and treat people with special needs in our society.

“From the start, this book is unique.... Precious Cargo is a tale of growth and redemption.... [Precious Cargo] is shot through with images both uproarious...and tender-hearted. Together, they depict Davidson’s unsentimental education, and offer insight on how best to suffer life’s slings and arrows.” (Maclean’s)

What listeners say about Precious Cargo

happy book with a relatable character

great story with a great performance! John Cleland's voices to immitate the bus riders really pull you into the story #audible1

Full of Hardship and Humour

Craig Davidson’s biography lets you experience the highs and lows of children with special needs through the eyes of their bus driver and sometimes caregiver. I am glad Davidson shared his story, he was able to make he feel sorrow and pity one minute and had me laughing another. Narrator John Cleland was able to make me feel like I was actually in Davidson’s head reliving his memory. His comedic timing helped the progression of the biography and, is in part, why I was able to laugh out load during this book.

The only part that took away form the overall story was the excerpts Davidson included from his unpublished novel, the tie in to the biography is obvious, but still it seemed unnecessary to include.