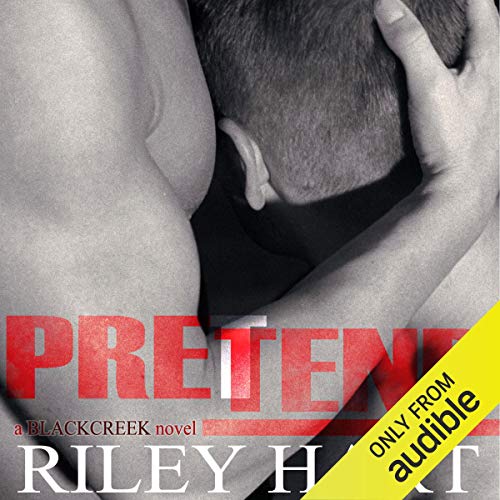 Written by: Riley Hart
Narrated by: Luke Itzvic
Try for $0.00

Mason Alexander thought all he wanted in life was something to call his own - something without the family name attached. He got that when he bought his bar in Blackcreek...but then a hard truth opens his eyes that he's been lied to his whole life, and he's tangled amid the family that loves him, a truth that haunts him, and torn between the life he wants for himself and the obligation he feels for his family.

Gavin Davis knows a thing or two about living a double life. Being a gay man with strict Christian parents who believe he's going to Hell, has never been easy. Instead of dealing, Gavin lost himself in his career. Teaching music gives him solace. So when he loses his job at a private school for helping out a gay kid, he feels like he lost more than a job. He lost his identity. Blackcreek is a new start for both of them, two men, loyal to a fault, who both feel obligated to people in their lives. What Mason and Gavin don't expect to find in each other is the place where they can be real. They know they want each other, it's the rest of it they can't figure out. Caught between loyalty, obligation, fear, tragedy and family, Mason and Gavin's lives threaten to pull them away from each other if they don't get real, and stop playing pretend, for good.

What listeners say about Pretend

Luke did an OK job. I swear all his female voices sound like old ladies and all the same but I guess thats hard for a guy. He did pretty good at the performance aspect. Emoting emotions well but the 2 Mcs voices seemed the same and I'm just not overly fond of his overall voice. It wasn't awful but just not what I'd expect. My favs are Charlie David, MD, Leslie and Boudreaux who have that more manly tone.

I really enjoyed this story. It was interesting and believable. There were moments when I wanted to choke out the one mother but again the rest of the story made that aspect bearable. I loved these two men together. They were well suited for each other and those steamy scenes were scorching hot. I also loved hearing updates on the other books characters. I was waiting for a specific ending that never came. Though perhaps that may of been too standard cheesy. Regardless it ended very sweetly.

Another good book in the Blackcreek series. I really enjoyed Gavin & Mason's story. They both had a little baggage and they both dealt with it without too much drama. They had amazing chemistry and I'll admit the top/bottom thing in this book left me a little frazzled. Mason was bossy and dominate and he is the bottom, Gavin is a little timid and submissive and he is the top, this was hard for me to wrap my head around but to be honest I kinda loved that! I was happy to see everyone get their HEA.

The narration was great.

Nothing is ever easy.

This is book 3 in the series and all of them narrated by Luke Itzvic who is fabulous. Mason and Gavin meet one day and hit it off. Mason owns the bar, and Gavin had just come back to town for Wes and Braden's wedding and stays. Gavin goes to work for Mason and they start hanging out and realize they both are having some pretty awful family problems and try to talk them out with each other. Before long they realize how much they mean to each other and have fallen in love. They also realize they can't stay together and figure out their personal family issues so they break up but eventually know they can't live without each other and find their way back together.

This book is a bit different than the others...

I was a bit lost with Gavin's character. His character wasn't strong enough. His parents believed he would go to hell because he's gay. I got that. Boy, his mother can kill you with so much misguided (demented) love. Interesting character. To think there are real people like that! Breaks my heart. Throughout the book, I wondered how will this be resolved. Can't say I liked how this got resolved... too much fairy-tale ending. Wasn't believable. Sorry.

I really liked Mason's character from Book 2. And, he's further shown to be even better. Bringing Mason to life as the "power bottom" was hot as hell. Their M/M scenes are so OMG!

Gavin and Mason decide to break up to figure out their life first. Sure this sounds good. But really? Was this necessary? As adults, they could have just stayed together and did the same things. Not needed. .... what about the "power bottom?" This was a dumb idea.

Once again, the narration is over the top. Done perfectly. Sometimes too perfect... i.e. Gavin's mom! Luke did her voice so well. I'm so impressed by Luke in this series.

Worth listening to. Enjoy!

(Some spoilers – not totally ruiners – but spoilers included)

I’m going to start off by saying that I couldn’t get into this book before (as an e-book). I’d start it and stop over and over but when it came out on audio I knew I wanted to listen to it. I was really glad I did!

I am a huge Riley Hart fan and I’ve enjoyed every book she’s ever written (some more than others – of course) but I don’t think she has a “bad book” in her.

However, this was not my favorite book – especially in this series of great books. One of the things that I found disconcerting about this book was how utterly dependent on the opinion of others both of these men are. Gavin is absolutely wrecked – even as an adult – by the asinine opinions of his family and doesn’t begin to move on with his life until he has that special “moment” with his father that somehow allows him to finally just be who he’s always been. Mason, too, is so friggin’ worried about what his parents think and even his biological mother that he can’t make a path for himself.

While I actually agreed with them when they decided to take a “break” – they really did need to figure some shit out and they were acting ridiculous about it so something had to change – I was totally annoyed that – again – as adults – they couldn’t do this within the confines of their relationship and that it was still their parents and their BS driving a wedge between them. They never came across as needy 17 year-olds EXCEPT in how they dealt with their families and I didn’t ever understand it.

On the other hand, they absolutely dealt with their own relationship (for the most part) in a very adult and mature way. Moving gradually from friends to lovers and keeping the other honest in all things. They did what needed to be done when the chips were done and persevered when things got rough. Until they broke up. Then I was like – really? Really?! You’re STILL letting your parents do this to you? Why can’t you lean on each other and push through?

I loved their relationship, though. It was hot, and comfortable, and challenging, and ooooo the dirty talk! Mason is an awesome “power bottom” and he and Gavin had some wicked hot chemistry together.


Had I read this I think I would have skimmed some of the parental BS to get to the good stuff – their relationship. I ADORED the parts where these guys were just WITH one another. And the smexy times. GAH! So good! When Mason tells Gaving “Now’s the time you’re gonna want to kiss me” I practically swooned! Their time connecting physically absolutely made up a lot of ground for me. That worked and worked really well.

It was also great seeing the other guys again. I especially like Wes and Braden’s happy moment!

I think that I enjoyed this more as an audiobook than I would have as an e-book because I really loved listening to Luke Itzvik’s narration. He really added to the scene and made it seem more real and less OTT dramatic.

All in all it wasn’t a bad book and if I didn’t have the other AMAZING books in this series to compare it to I think I’d have really liked it more (?). But, compared to Collide which just totally did it for me, I have to say this wasn’t nearly as good. It was enjoyable and definitely had it’s high points, but I kept wondering how these MEN could keep acting like helpless children at times.

I want to go to Blackcreek!

Riley Hart has done it again. Mason and Gavin are so great together. Love, sex and finding ones self and a few friends thrown in.

So I didn't like this one as much. I did really love Gavin and the things he was going through. It really broke my heart seeing his relationship with his parents and it made him feel. The things that were said to him and his mother wanted him to pretend to be something he wasn't made me sick. Mason made him feel so accepted and just wanted him to be happy. It felt like there were a lot of moving parts in this one, but we still got to see this relationship blossom. I just want Luke Itzvic to narrate all the M/M romance. He's steadily becoming a fave.

Big shocker. Another book that's 90% the same sex scene recycled over and over from the first three books because Riley Hart thinks that's all gay men want/are capable of. Every second of the book they are wanting sex, about to have sex, or having sex. If you want to read a smut magazine and get off, this book is perfect. If you want to read a real book with interesting characters, a good story, thought, depth, .... hell anything other than sex scenes, definitely don't read this book. The 10% that isn't sex is decent, but... that's like 3 chapters... maybe.

I wanted to stop listening to it, but made the decision to get to the end. The thing that was the most challenging for me was the level of repetition... felt that the same points were made repeatedly. The “over religious” mom was too much. I get it, many people continue to struggle with family who cannot reconcile their faith and anything outside of heterosexuality - the point was more than made. I would guess than anybody reading a LQBTQIA+ romance novel gets it so why prolong it? Getting insights on how the protagonist is dealing with it would more likely serve the reader.

these two really worked hard at fooling themselves. but, it all worked out. I really liked this book.

The story was romantic, steamy, and real. I will never forget this book. It’s a story of overcoming, challenging yourself, and loving someone. In the end four simple words “I love you music man” was the essence of the perfect beginning. A book worth reading.