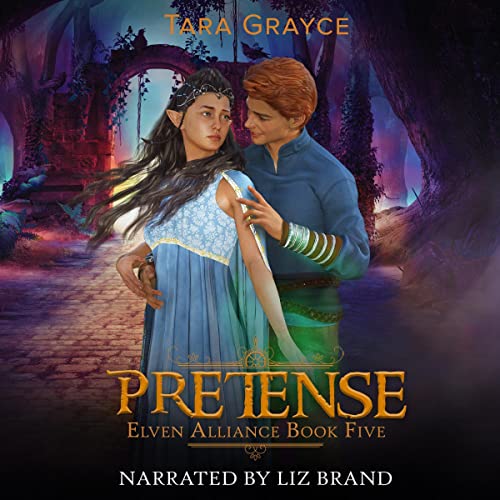 Written by: Tara Grayce
Narrated by: Liz Brand
Try for $0.00

With his reputation set to be forever ruined, they race to do damage control. Yet an even greater danger lurks behind the leak, threatening more than just Farrendel’s reputation.

To save his brother-in-law and rescue the alliance, Prince Edmund of Escarland proposes a fake courtship to Jalissa, the elf princess who has broken his heart not once, but twice, even if she doesn’t know it.

Edmund and Jalissa struggle to unravel the conspiracy, save Farrendel, and attempt to keep their fake romance from becoming all too real. It might be more than this spy prince and elf princess can handle.

From the pen of best-selling author Tara Grayce comes the next installment in the Elven Alliance series!

What listeners say about Pretense

my second favorite of the series!

My favorite book on the series is War Bound mainly because it has Pov from both Essie and Farrendel. I liked 3 and 4, even though I wasn't the biggest fan of Malantha it took me time to warm up to her and Rarreth as pov characters.

This book was awsome since there is really heart warming chapters with Essie and Farrendel and I love Edmund and Jalissa as couple. the story is really good to tense in some parts hilarious in others. The narrator is awesome as usual.

this also somewhat of a conclusion to Essie and Farrendels story and no spoilers but it is adorable. from book one to this book takes place over the course of the year and they come a long way.

Even though Essie and Farrendal won't be pov characters in the next book I look forward to hearing about Julian's story.

Get caught up in this epic Story

I absolutely fell in love with this Series. I found myself with palm to chest. Or taking a shakey breath... Eyes Misting.
The only thing that wasn't it was... mutt. That means the Story was well written and preformed awesomely by the Narrator. ⚘⭐⭐💐

narrator did a great job with this story. I live this series. bought all of them.