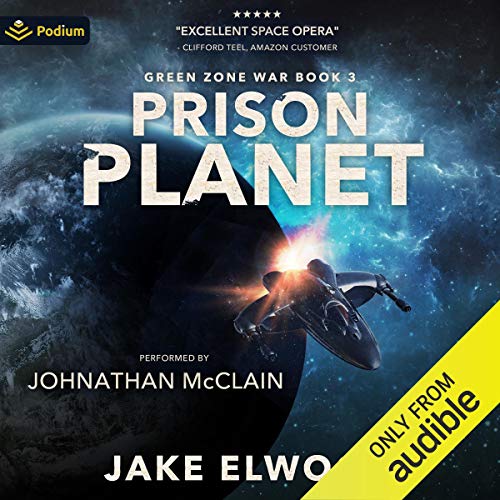 Written by: Jake Elwood
Narrated by: Johnathan McClain
Try for $0.00

Camp One has one brutal rule: If you attempt to escape, you die - and three random prisoners die with you.

Tom Thrush has resigned himself to dying by degrees, doing forced labor while he slowly starves. When he learns that a distant mesa holds a slim chance at freedom, he does nothing. The price of escape is too high.

Then fever sweeps through the camp. Surrounded by armed guards and an unforgiving jungle, paralyzed by the threat of reprisals, Tom watches as the men he’s sworn to protect die one by one. If anyone is to survive, Tom will have to do the unthinkable.

What listeners say about Prison Planet

I loved this book! as Military Sci-fi genre stands, this is one of the best books I've read (In the case of the Audiobook version, the performance is impecable)

The Author crafts a compelling story with intricate and interesting characters that give this book a voice of it's own. The dialogues are the best I've seen him write. I admit I've been very critical with this author in the past, but I take it all back as I finish this piece. I believe he has found his voice, or the setting his stories are best suited for.

In short, this book is so good, it has been worth to follow the series up until this volume, and I look forward to what the author will write in the future.

The series is awesome so far, and for the most part this book was entertaining and definitely had its moments. My only real gripe about this novel is the idea that officers in the navy would refrain from making escape attempts. Every military service a cross the earth and for all of recorded history have had a standing order for all soldiers to attempt to escape whenever taking captive. Even when the service members have been threatened with the same barbarism portrayed in this novel. The consequences of the actions of Tom at the end of the book are certainly not consistent with history that said maybe in the future the space born military do not hold the same values that earth's historical militarys had.

good store but the whispering

love the story but the whispering for the inner thoughts of the characters drives me nuts, hard to hear when not wearing headphones

Anyone who has been a prisoner can easily relate to this book. It was well written and the main character acts just like you would expect a young junior officer to act. A very likeable series of books; bring on the next installment.

The only thing this book brings to the table is a vauge sence of character development. I mean bare minimum. The entirely luck based rescue was a joke. For it then to be followed by a real, planned rescue pretty much invalidated the whole this in my eyes. It pissed me off honestly.

I'd recommend skipping this one, nothing really to gain by listening to this.

A good story by itself, but doesn't progress the main story much. Not many triumphs for our main characters to find rewarding. Also, hard to hear when the narrator whispers.

pretty boring this book is just filler the first book was good but this one is one to go to sleep with.

I enjoyed this so much. Well written and performed. Highly recommend that you check this series out.

An absolute stand out in the Series!!!

T this was about 3 hours too long it should have been a couple extra chapters on either the book before it or the book after.