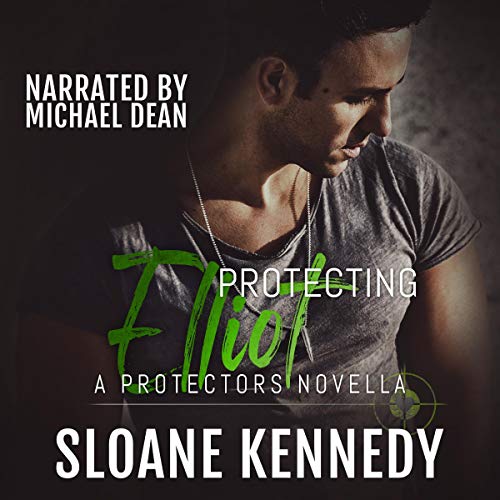 Written by: Sloane Kennedy
Narrated by: Michael Dean
Try for $0.00

Protecting him was just to supposed to be another job. Until it wasn’t.

Two years after surviving a brutal attack from members of his own unit, former Special Forces soldier Cruz de la Vega has found new purpose working for an underground vigilante group that offers justice when the law can’t. When he’s assigned to figure out who attacked a local gay rights activist, Cruz expects it to be just another job.

But when it comes to protecting Elliot Wittier, he soon learns that the last thing he wants is for the intriguing young man to be just another job.

At 25 years old, Elliot Wittier is well on his way to having the perfect life. As the head of a hugely successful investment firm and the founder of a prominent foundation, he should be on top of the world.

But looks can be deceiving and Elliot knows how to play the game. With the fear of failing the two most important people in his life always at the forefront of his mind, Elliot keeps an iron-grip on the control that has served him so well in the past. But when a violent attack leaves him vulnerable, Elliot’s carefully constructed world starts to fracture. As he struggles to keep the threat under wraps, he’s thrown off guard when a gorgeous stranger takes an interest in him at a Halloween themed benefit. Throwing caution to the wind, Elliot decides to allow himself the freedom that being with the enigmatic Cruz de la Vega brings for just one night.

But what happens when one night isn’t enough? Or when the past catches up with the present? Can what two men found in each other in just twenty-four hours really last a lifetime?

Although it features several characters from my other books and is part of the “Protectors” world, Protecting Elliot is a stand-alone novella that can serve as a great way to get a feel for the Protectors/Barretti/Finding universe I’ve created. In regards to the timeline of events, Protecting Elliot occurs after Book 9 in my Protectors series, but it is not necessary to read/listen to any other books to enjoy this novella. I’ve specifically written this book to give new readers/listeners a chance to meet my guys and for loyal fans to check in with old favorites while still meeting a new couple.

What listeners say about Protecting Elliot: A Protectors Novella

While Protecting Elliot does mention characters from both the Barretti & Protectors series you don't have to know those characters to enjoy this one. I would recommend reading/listening to Saving Ren. It would help with the backstory and I enjoyed that Protecting Elliot, as well as Obsessed, helped resolve a minor issue involving Declan from Saving Ren. (If you're new to Sloane Kennedy, the Protectors series, or the fact that it intertwines with several other series - check out her handy chart and reading order on her website.) I've read through the series several times, but finally wrote out a review when I listened to the recently released (February 2020) audio.

I struggle with novellas sometimes because they can seem somewhat incomplete. This is definitely insta-love and the ending is what amounts to an HFN over an HEA – but it’s still a satisfying read/listen. This book completely sets up the reader for Obsessed (released May 2020) and we get a little more of Elliot & Cruz’s HEA there.

Micheal Dean’s narration is fantastic. I appreciate his ability to give each character in what is almost entirely an all male cast their own unique voice and mannerisms.

I borrowed the ebook through Kindle Unlimited and later purchased my own copy. However, for full disclosure: I won a free copy of the audiobook from the narrator and am voluntarily updating my honest review.

Narrator Michael Dean delivered a perfect 10! This short story was jam-packed, absolutely brimful of deliciousness as I nostalgically remembered the past novels of the Protectors series.

If you are looking for an appetizing delightful and delectably hot audiobook, this is it. The plot moved fast, but perfectly, reached the goal as the author intended. Although, in a way unpredictable, the familiarity of the older favorite characters gave me warm fuzzies down memory lane.

If you are a fan of this series, then this is a click-buy-listen. I definitely recommend it.

I loved this story! It flowed well and captured all the essential elements. Don't miss this one!

Sweet and romantic with action and suspense

Right from the start we knew Cruz was going to be in trouble with Elliot for the less than honest way they met and the relationship he was cultivating if/when Elliot learns the truth..

They were smokin hot together. I really enjoyed this Protectors novella. It was sweet and romantic with a bit of action and suspense.

The narration was good. The voices seemed to fit the characters well

The story of Elliot and Cuz and how opposites attract was really great. Elliot is such an anxious person and Cuz brings his confidence out in such a short time in getting him to step out of his comfort zone. This was a great short story and I liked that it brought Declan into it with the part he played in Elliot's family tragedy and saves Elliot. Cruz is a character you would love to be friends with and the perfect person to complete Elliot. At the end the chemistry between Sam and Matias was intriguing enough to make me anxious for their story.

Another great listen. As always Sloane writes a compelling interesting story and Michael narrated it beautifully.

This is a fantastic listen. I love listening to these intriguing audiobooks be this author. On to the next one!