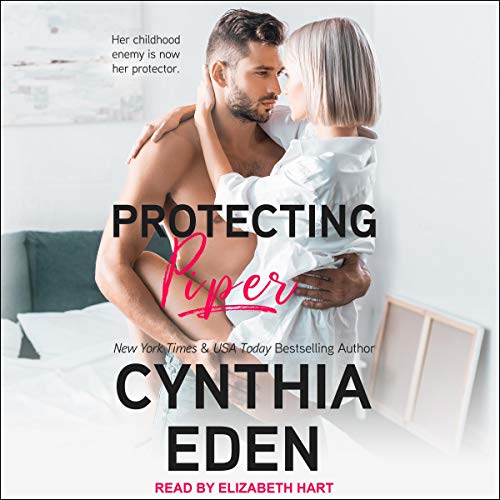 Written by: Cynthia Eden
Narrated by: Elizabeth Hart
Try for $0.00

Eric Wilde has always known that Piper Lane isn't for him. She is his younger brother's best friend...and probably more. But that hasn't stopped Eric from wanting her. For longing for the one woman that he can't have. Sure, he's rich, successful - he's built a security empire, and he's got the world at his feet. Only he doesn't have her.

Free-spirited Piper Lane has always considered Eric to be the enemy. He's seemed to resent her, and the guy just flat-out makes her nervous. Every time she's around him, she winds up doing something horribly embarrassing. But, this time...everything has changed. This time, he's the one man she needs the most.

A stranger has broken into Piper's home twice, and she feels like someone is following her. Watching her every move. She needs a professional to help her - so enter Eric Wilde. He promises her protection, he promises to put his best investigators on her case, and he even moves her into his house. Suddenly, the guy who has always been the villain in her life...he's now playing the role of hero.

Everything will change as the danger mounts.

What listeners say about Protecting Piper

Characters are well developed, narration was great even though i wished their was also a male narrator. I loved the story and i loved how dark it was. This is worth the credit.

The Author did a great job with keeping the stalker a suspense. Great love story. A story of Beauty and the Beast. ❤️❤️❤️😂

Eric and Piper have known each other since they were kids but Piper was his Brothers best friend. Who he's been crushing on for years, so he stayed away and treated Piper crappy to keep her away from him, and he has been waiting for the day When his Brother and Piper announce their getting married, except the night he is called and dreading the news its to find out that Piper has a stalker and his brother wants help protecting his BFF. Eric and Piper are put in close proximity and dreams, wishes, fantasies and desires come to surface for the two, the only problem is coming clean with their feelings, and fears and telling his brother and Pipers BFF that they are together and trying to catch the stalker. The twists and turns of this story will keep you turning the pages.

Love the suspense in this one. First book I have read from this author and I think they did a great job at keeping you guessing of who the bad guy was. Sweet how a simple childhood misunderstandings delayed the love these two had for each other.

The downside, the narration felt off. Even though the narrator has a lovely voice and had some inflection, their voice it still felt monotone. Made me feel like they were reading a college text book rather than a story.. I favor narratives that are a bit more lively.

suspenseful and sexy and frustrating

Like most suspense they keep it going with stupidity and emotional decisions and this is no different. they even risk others because they are so clueless. the romance though is sweet and intense and sexy.

I put off starting this series, and I was right. I just reread some of the LOSt series and it was so good I wanted more but this is not it. This seemed to me to be more of a new adult romance- because these people were Emotionally stupid & immature. I’m a big Cynthia Eden fan, but whatever I just read/ listened to was a waste. I know she can write suspense with satisfying romance, I’ve read them! This was ALLL Simpering heroine with why is this happening & not telling anyone she’s being stalked & wishy-washy Alpha hero- supposedly smartest, sexiest, baddest-jealous of his younger brother who was ONLY her best friend -but never had the balls to tell her how he really felt. The miscommunication was more painful than the back and forth and dishonesty about feelings. Even some of the side characters weren’t likable & I felt myself forcing the ending by chapter 13- JUST TO KNOW WHO THE STALKER/ KILLER WAS- & I was way less invested in that than I should have been in how much I disliked everything else. I didn’t like these characters enough to care what happened to them & can’t further invest in this series. I’m so used to smart women from this author-this girl was too stupid to live, refused to believe what was in front of her, had a morbidly low self esteem- & even though the hero knows this still handles her poorly. I felt frustrated and uninterested in their HEA-I also felt my IQ lowering!!
Sorry- I don’t recommend it if u r looking for the Cynthia Eden from the LOST SERIES... come on CE give me some more KILLER INSTINCT level suspense and character development. I can’t relate to this and it’s not good enough for an escape- I was just irritated consistently.
Super disappointing!!!! But maybe it’s just me. There is heat & a stalker. If that’s all u need......but I need more than a little hot sex to keep me interested... there wasn’t even very much of that.