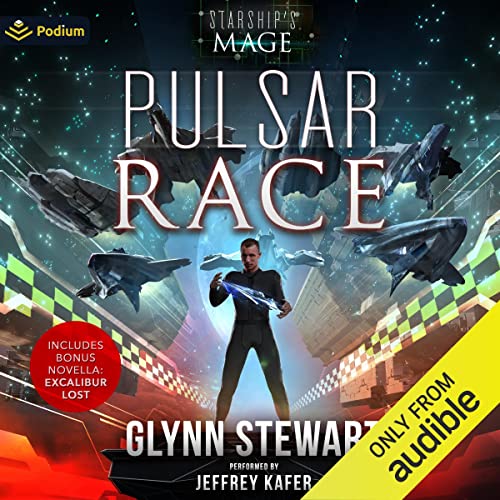 Written by: Glynn Stewart
Narrated by: Jeffrey Kafer
Try for $0.00

A twin-pack of popular novellas from the desk of Glynn Stewart: Pulsar Race in the Starship Mage world and the standalone space opera Excalibur Lost.

A retired Mage with no plan. An old friend with no hope. A ship built on a daring dream.

Mage-Captain Ivan Halloway has retired from the Royal Martian Navy and the service of the Mage-King of Mars. He has returned to his homeworld to rest, but his only real plan is to avoid the war he sees coming to the Protectorate.

Captain Karl Charpentier - captain and pilot of an interstellar jump-courier - is his oldest friend. Crewless and drowning in debt due to a series of mistakes, Karl turns to his newly unemployed friend with a desperate plan to solve all his problems.

To save his friend’s ship and career, Ivan must help him take his courier into an illegal race through a deadly region of space - a race run by the very people Karl Charpentier owes money to. How could it possibly go wrong?

A broken species, a broken man, a lost legend.

Only dreams and stories remain of the world humanity once called home, but scattered refugees live in the corners of the empire of their conquerors, the Sacred Council of Races.

Among those refugees is Gerard Arkanis, first officer of a salvage ship dedicated to picking over the remains of his species’ desperate attempt to stand against the Council’s galaxy-spanning theocracy.

Hard work and hypocrisy have kept Arkanis alive, serving a god he cannot believe in. Humanity’s fate leaves him no choice - until their ship stumbles onto a legendary lost warship and the remains of a failed plan to save all mankind.

What listeners say about Pulsar Race

Left me hoping for more...

The storyline is good and would hope to see more books in the future.

two separate stories for the price of one book. Glynn Stewart you are an outstanding author.