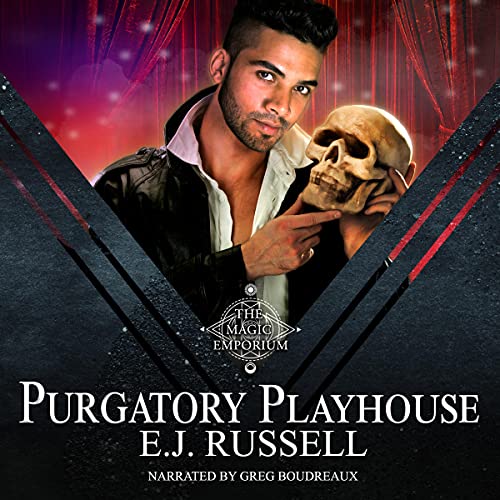 Written by: E.J. Russell
Narrated by: Greg Boudreaux
Try for $0.00

Staging a musical in Purgatory can be absolute hell.

Lonnie Coleridge last saw the sun in 1968. Since then, he’s been consigned to Limbo, still wearing the same tie-dyed T-shirt and bell-bottomed jeans he had on when he left his life behind. He and others like him have one chance each year at redemption: produce a show for the Greek pantheon. Whoever pleases this very specific - and temperamental - fan group could earn the right to move on.

But after a literal act of god (*cough* Hermes *cough*) destroys their sets, lights, and costumes, the company needs emergency help to rebuild. Without it, all of them could poof out of existence forever.

Out-of-work theater technician TD Baylor has precisely three things on his cosmic wish list: a job, a place to stay, and a boyfriend who isn’t a total tool. He thinks he’s got the first two nailed when he gets a line on a two-week gig that includes room and board. So what if the job tip came from a guy who was leaning way too hard into the LOTR cosplay at a sketchy Halloween pop-up? At this point, TD doesn’t have anything more to lose, so he figures…what the hell.

He didn’t realize hell was the operative word.

When Lonnie greets him at the theater door, though...whoa. TD fantasizes that item number three could be within his reach. But then Lonnie gives him the bad news: This is Purgatory Playhouse, aka Theater of the Darned. In two weeks - if they’re lucky and can successfully mount a musical version of A Midsummer Night’s Dream - the company will return to Limbo after the curtain falls. If they’re not lucky?

Remember that part about hell?

Purgatory Playhouse is part of the multi-author Magic Emporium Series. Each book stands alone, but each one features an appearance by Marden’s Magic Emporium, a shop that can appear anywhere, but only once and only when someone’s in dire need. This book contains a theater techie who’s one couch surf away from homeless, a production assistant who’s sort of, um, not alive, Greek gods behaving very badly indeed, and a guaranteed HEA.

What listeners say about Purgatory Playhouse

This was a sweet cute, over the top, whimsical romantic comedy.

I had so much fun with this one!!

The author's writing style was absolutely hilarious and had me engaged.

The dialogue was witty and whimsical at the same time.

The narration was enjoyable as well

I have to start by saying I have a ridiculous over-the-top love for this book. The authors experience and love of theater, a deep knowledge and hilarious skepticism about Greek mythology, and an absolute social justice warrior hero of a technical designer come together to create a thoroughly delightful story.

Smart, very funny, clever, charming, and immensely creative - totally on brand for EJ Russell. Her best book, I think, which is saying a lot.

I fell in love with this book when I read it, but it is no surprise that Greg Boudreaux, who is a wonderful, versatile, and often hilarious narrator, brings great color and dimension to it. His comic timing, passion, and talent for characterization are on full display here.

I loved that this author did this comedy!! The play on the transgressions of the gods and goddesses tickled my funny bone! The main characters are sweet and their path was fraught with obstacles. I absolutely adored the beautiful narration! The narrator did an excellent job of each individual character!

I honestly didn't finish the last few chapters. The writing is mediocre, the story is fluffy, characters are undeveloped and 90% of the story is the main character having a fit because the ancient Greek Gods were unfair then telling them off and getting his way...

I went into this book without reading the blurb in the last cash sale as I knew the writer and the narrator from previous books. I am so glad I got this one. It was totally worth buying.

In here we have TD, who's real name is Taylor Baylor because his parents were different and Lonnie, who has been in purgatory since 1968.

They took one look at each other and it was instalove. Which was good since they spent very little time together as they were putting on a play for the Greek gods.

Well, TD was not someone who can let anyone be hurt so he pretty much went to war against these gods. And I don't blame him, what the gods had been doing was bad.

The ending started off sad and I was about to start raging as I wasn't sure the HEA/HFN was going to happen, then bam!! That ending.

You have to put aside logical questions and just go with the vibe.

This actually had some sex scenes, which were great, but shocked me cause the last book I read by them only had a kiss. I'm glad to have seen these.

The narration was top notch and Greg Boudreaux was awesome as always.

Good story but ending was abrupt

I loved the story over all. The characters were entertaining and well fleshed out and the story was engaging. However, the ending was a bit unsatisfactory as we don’t actually get to see the end of the play house and just see the aftermath. The story switches perspectives throughout so I’m not sure why it couldn’t switch to see the final play.

This was a fun read/listen!

A playhouse in hell

EJ Russell excels at writing at paranormal romance stories and this one was no exception. I’m really impressed with her knowledge for mythical beings and especially Greek gods in this series.

TD is a theater technician who’s just one couch shy of being a homelesss guy. Out of employment and close to being homelessness, needless to say, TD is desperate for a job. When he found a job he so desperately wanted in Marden’s Magic Emporium, he thought it was a godsend. Ironically, it’s really gods who want this production to happen. A limbo, a pseudo hell and unfortunate souls. It’s onehelluva journey TD must face to overcome all these hurdles.

I think this is definitely light on romance and heavier on myths, Greek gods and paranormal stuff. I like how Lonnie is how everything TD is ever hoping for and I really think they are a good fit to each other. I won’t spoil too much since there are a lot of wonderful materials to find out. And Greg Boudreaux’s narration was a yummy treat for this listener. Recommended if you like EJ Russell and paranormal romance stories.

I really enjoyed the book a lot. The very end felt a bit rushed but overall it was so much fun to listen to. I really liked the characters and their interactions with each other. It was also a fun take on Greek myths and the theater elements made it even more fun. It was a sweet and fun story.

Great until the end

This book was good, not ground breaking - but it felt well researched and fun, right up until the end. The end is rushed and the conclusion happens completely off page - despite having a narrating character that was present at the event. It spoiled what was otherwise a good story.