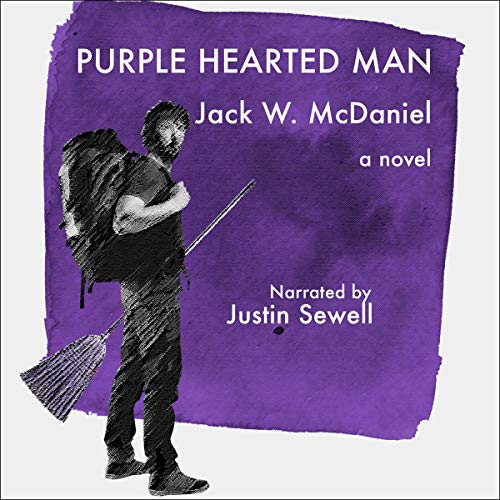 Written by: Jack McDaniel
Narrated by: Justin Sewall
Try for $0.00

Purple has a difficult job: He was placed here to take down the One-Eyed God. It's his mission and he won't fail. It's a lonely road for someone like him - a healer - but he has help. The hippies are his friends: Chloe the yogi, Wheat the candlestick maker, and Berrydream, who is in retail. And he has his tribe: Charlotte, Stranger and Jackson. Eventually, the tigers that roam the city might become allies, too. Who can say, tigers are fickle.

The One-Eyed God is nefarious and powerful. His agents lurk everywhere and the aliens are certainly up to no good. Even the one called Sister can't be trusted.

But the universe is wise and has given Purple skills. Getting control of his invisibility will help, but that only matters as long as molecular cohesion is maintained. Most of all, Purple has purpose and, of course, he has his broom.

What a great book! One of the better that I've listened to lately and I listen to quite a lot of audio books. The author has a talent for descriptive and engaging language that pulls you in. After reading this book, you may think totally differently about homeless people that you encounter.

This story takes some time to connect with and follow, but once you are in, it prods at any preconceived ideas you might have and challenges one to think. It explores the inner thoughts and psyche of a war veteran facing homelessness and striving to build community, fighting against the evils of the world, truly thought provoking.
The narration is well matched with the tone of this book. The narrator takes a reserved and calm approach to voice Purple. This matches his persona well, someone who is contemplative, direct, thoughtful and well composed. And when new characters are introduced, the narration changes, matching the tone and mood well, creating imagery for the listener, pulling us into the story and guiding us along the journey.
Justin speaks with excellent clarity, he connects with the characters and helps the listener appreciate the subtleties the author penned into this story. He is consistent and easy to follow, making it an enjoyable story to listen to, to ponder and try to decipher. It's four hours you'll be glad you tuned into, and it will leave you thinking and wondering and seeing the world a little bit differently, and maybe with a better understanding.

Great read by Justin Sewall. The audio is awesome and clear. The reviews of the book on Amazon are on target. Unique. War vet, PTSD, psychosis - and by the end of the book you'll think he's the most sane person in the world.