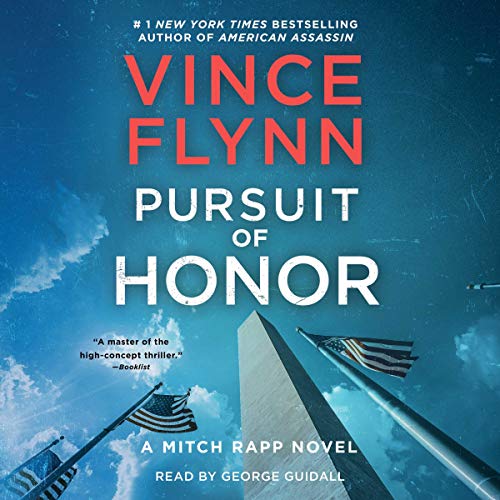 Written by: Vince Flynn
Narrated by: George Guidall
Try for $0.00

The action begins six days after a series of explosions devastated Washington, D.C., targeting the National Counterterrorism Center and killing 185 people, including public officials and CIA employees. It was a bizarre act of extreme violence that called for extreme measures on the part of elite counterterrorism operative Mitch Rapp and his trusted team member, Mike Nash.

Now that the initial shock of the catastrophe is over, key Washington officials are up in arms over whether to make friends or foes of the agents who stepped between the enemy's bullets and countless American lives regardless of the legal consequences. Not for the first time, Rapp finds himself in the frustrating position of having to illustrate the realities of national security to politicians whose view from the sidelines is inevitably obstructed.

Meanwhile, three of the al Qaeda terrorists are still at large, and Rapp has been unofficially ordered to find them by any means necessary. No one knows the personal, physical, and emotional sacrifices required of the job better than Rapp. When he sees Nash cracking under the pressure of the mission and the memories of the horrors he witnessed during the terrorist attack, he makes a call he hopes will save his friend, assuage the naysayers on Capitol Hill, and get him one step closer to the enemy before it's too late.

Once again, Rapp proves himself to be a hero unafraid "to walk the fine line between the moral high ground and violence" (The Salt Lake Tribune) for our country's safety, for the sake of freedom, for the pursuit of honor.

"Flynn demonstrates that he truly understands the psyche of the enemy.... Really scary, so realistic." (BookReporter.com)

What listeners say about Pursuit of Honor

This book is a continuation of the story line from the previous book, "Extreme Measures". It would be ideal to read these books close together.
#Audible1

I've been a fan of the Mitch Rapp series since American Assassin, but with Pursuit of Honor and a bit with its predecessor the books have moved away from the spy/action thrillers and into partisan political propaganda. The majority of the book is Mitch in meetings about the ethics of 'Extreme Measures'/torture, bashing liberals as soft on terrorism, and even brings up abortion.
I want to read/listen about Mitch kicking ass and stopping nukes at the last minute - not Mitch in closed-door Senate committee meetings pushing the authors political opinions.
I bought this book due to the unfinished story line in Extreme Measures and am very disappointed. This will be my last Mitch Rapp book.

I only wish this installment of the Mitch Rapp series was longer. I enjoyed this book very much. Download this you will enjoy it. On another point I wish Audible would offer the early books in this series in an unabridged format. I refuse to purchuse abridged books.

A great book on audio

I can't wait for the next one. I read so many books and I wait impatiently for new releases from several authors, and this series is one of those for me. I feel it is best to read this from book one if for no other reason than the book and story will last longer for anyone who has not read it yet. If you have not read Rapp yet do so you will not be disappointed with this. I promise it is one of the best listens you can find.

This book could have been taken from today's headlines! It is a real page turner, and I especially liked the confrontation with Congress persons who apologize for terrorists, and demand that we treat them with more respect and greater rights than they would offer us! I hope it is true that we have a few who are still willing to defend us!

Great book! Rapp is as good as ever. Could not stop listening. This was one of Vince Flynn's best.

Couldn't wait for this book and like his others its excellent!

If you are fan of Mitch Rapp and Vince Flynn you don't even have need to think about this one, it's a winner. If you haven't read any of Vince Flynn's books this should defiantly get you hooked.

One of my favorite authors and one of his best books. I almost had to take time off work to finish this one.

I've listened to all of the Mitch Rapp books. Fast paced and enjoyable. I enjoy that he is not politically correct. Just out for what's best for the country. Go Mitch!!!

A Fast Paced Pursuit of Excellence

A really great book that confronts the reality of the terrorist threat and the myopic view of many left leaning liberals. The book is fiction but grounded strongly in todays realities and very accurately depicts the manner in which the muslim world views the west. The action and detail are superb. The ending was a bit weak when compared to the rest of the story but that is a minor point.Narrator was OK but needs to work on his cuban accent which is poorly done. Overall this book is well recommended.

They just keep getting better.

I hope that there are a couple real Mitch Rapps out there in the real world. Vince Flynn has to be one of my favorite writers.

I've enjoyed each and every one of Vince Flynn's books. This one was no exception. Kept me engaged throughout. I will say that the ending felt a little rushed and somewhat predictable but nonetheless I highly recommend this book. The one complaint - I have to wait another YEAR before his next book?!