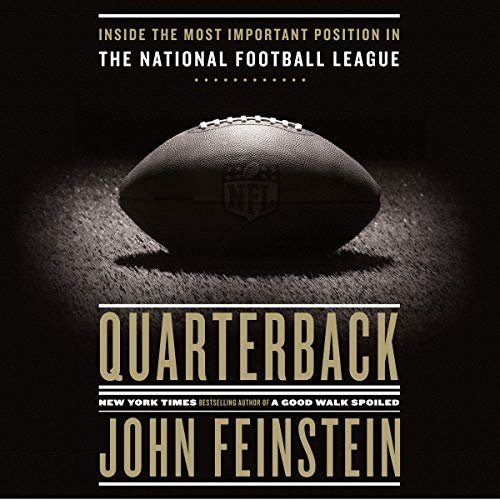 A major new audiobook from number-one New York Times best-seller and sportswriting legend John Feinstein, Quarterback dives deep into the most coveted and hallowed position in the NFL - exploring the stories of five top quarterbacks and taking listeners inside their unique experiences of playing the position and holding the keys to their multibillion-dollar teams.

In the mighty National Football League, one player becomes the face of a franchise, one player receives all the accolades and all the blame, and one player's hand will guide the rise or fall of an entire team's season - and the dreams of millions of fans. There are 32 starting quarterbacks in the NFL on any given Sunday, and their lives are built around pressure, stardom, and incredible talent. Legendary best-selling sportswriter John Feinstein, in his most insightful book yet, shows listeners what it's really like to play the glory position and to live that life - mapping out a journey that runs from college stardom to the NFL draft to taking command of the huddle and marching a team down the field with a nation of fans cheering.

Feinstein builds his profile around five NFL starting quarterbacks - Alex Smith, Andrew Luck, Joe Flacco, Ryan Fitzpatrick, and Doug Williams. With incredible inside access, we get the full quarterback experience...being drafted number-one overall, pushing through grueling injuries, winning Super Bowls, being named a starter on multiple teams, being the first African American QB to lead a franchise to a title. Feinstein shows us exactly what it's like in the locker room, huddle, heat of battle, and press conferences, through spectacular moments and embarrassing defeats. He explores the controversies of a league embroiled in questions of substance abuse and racism, TV revenue, corporate greed, and the value placed on player health. In the end, Feinstein addresses the ways in which each quarterback - some just a year out of college - is handed the keys to a franchise worth billions of dollars and how each team's fortunes ride directly on the shoulders of its QB.

This is Feinstein's most fascinating behind-the-scenes audiobook.

"Another must-read from a master of long-form sports journalism." (Booklist)

"Eminent sportswriter Feinstein embedded himself with five successful quarterbacks...tak[ing] readers from one breathtaking finish to another. With a critical eye and unsurpassed sense of sports history and culture, Feinstein examines qualities of leadership, the politics and drama within locker rooms and league offices, and the unrelenting pressure that can either crush a quarterback or turn him into a legend. Stellar research and storytelling that makes this an essential read for NFL fans and sports enthusiasts." (Library Journal)

"A worthy offering for fans of the modern, increasingly embattled game." (Kirkus Reviews)

What listeners say about Quarterback

The Title makes no sense, it is not about QB's

This book does not take you inside of the QB mindset. IT is a play by play review of games. Not what QB's are thinking. Go back and read some box scores. I really cannot believe this even made it past the publisher. This book could have been so much better. It is not terrible if you like hearing play by play of a bunch of old games that you may or may not have ever watched but it is not about the inside of QB's. I would skip this book there are so many other good football books.

I do not mean to disparage Mr. Feinstein. It's clear he's a great historian of the game did in fact provide a lot of very interesting tidbits about the game of football. The only issue is that apart from some interesting quotes by the quarterbacks interviewed, and a very interesting chapter on the career of the very first black superbowl winning quarterback, the book falls short of it's promise. It's bogged down by formulaic recaps of every game in each quarterback's career while providing very little insight other than repetitive clichéd phrases on how the quarterback takes the glory and the blame for the triumphs and lows of the team. Truthfully if you've watched games by these quarterbacks and have seen any interview then there is almost no new information here for those curious. I was drawn in by the promise of gaining insight into the position. However I had to stop reading from boredom since I couldn't take having games and seasons I had already watched dryly recapped with the same zest as a BBC anchor covering international news of the day. These recaps are broken up by meandering tangents that never led to a great insight or provided any information of value.

It occurs to me that perhaps Mr. Feinstein's mistake was choosing quarterbacks that are still playing in the league. These men have many reasons to be as guarded and protective of their inner machinations as they can be. They don't want to be put at a competitive disadvantage by opening themselves up in a book that will be out and read while their careers are still in swing. Perhaps this is why the most brilliant and palatable parts of the book were when the author focused on Doug Williams. Who was open, honest, and refreshing. With his other subjects not providing anything of value perhaps the author then sought to fill out the needed content with painstaking summaries of each season.

I hope that Mr. Feinstein revisits this subject some day. With the intention of providing subjects that are not afraid to really distill why only a very selective amount of people on this planet can play well enough to not get benched.

Good, But Not Great

This is an interesting compilation of conversations with a diverse mix of five quarterbacks - four current and one from the 1980s. Feinstein spent considerable time with each, discussing their thoughts on playing the position, managing expectations, assuming a leadership role in the huddle and locker room, balancing work and life, adjusting to the highs and lows of victories and defeats, and managing a career.

First, there's a lot more conversation than analysis. The author doesn't focus enough on common themes and differences. And he didn't appear to interview many others - head coaches, position coaches, front-office guys, teammates, etc. - to provide additional perspective on players (though he did rely on some media reports, as I recall).

Second, he bounces from quarterback to quarterback and present to past. It's not easy to follow the flow of the book in the audio format.

Third, he repeats a lot of information two or three times during the course of the book - like details of key games and seasons. It's not as though two of the quarterbacks were part of the same event. He just repeats certain details 50 or 100 pages later when profiling a particular quarterback.

Fourth, the book contains some inaccuracies that the author or an experience editor should have caught. Mike Gillislee wasn't a rookie in his first year as a Patriot; he had played multiple seasons with two other AFC East rivals. The Patriots didn't receive a third-round pick from the Colts in the trade for Jacoby Brissett; they received receiver Philip Dorsett (a second reference to the trade was correct). The Texans' head coach is Bill O'Brien, not Tom O'Brien. And there were at least two other similar errors that I noticed just from listening - not researching other statements in the book.

On the plus side, I continued listening. I learned some things. I have a greater appreciation of Alex Smith, Kirk Cousins, Ryan Fitzpatrick, Joe Flacco, and Doug Williams (though he plays a minor supporting role to the four others). And the author/reader has a very deliberate speaking style and cadence. This is the first book that I could play easily at 1.5X speed. Usually I can do only 1.25X.

I wish I could give about a 3.5, or even the 3.7 average at the time I write. I don't want to diss Feinstein because it's a good book. It could have been more thorough and a little more accurate.

Quarterback is a winner!

Very insightful. I am a John Feinstein fan and he delivers another winner with this book!

I normally enjoy Feinstein‘s work, but I couldn’t get through a third of this book. His political views permeate every chapter and the book is nothing more then a recap of games.

Very disappointed and returned for a refund!

not his best work

I'm a huge Feinstein fan, have read all of his books. This wasn't my favorite. He projected a little too much and (at times) talked more about Donald Trump than quarterbacks.

John Feinstein has captured a compelling examination of life as an NFL quarterback. The account of the behind the scenes stories of several players at the top of their profession is informative and illuminating. Unfortunately, Mr. Feinstein let’s his left wing politics ruin the overall story. His pathological disdain for the NFL as an organization and for the team owners makes him treat the players as hapless pawns rather than intelligent athletes capable of weighing risks, making decisions, and accepting the consequences of their decisions, and his clear case of Trump Delusion Syndrome taints the narrative he’s trying to weave. One can only wonder what leftist propaganda he pushes in his series of children’s books. Remove Mr. Feinstein’s political commentary and this is a great book, but unfortunately, you can’t.

very political for a football book

not what I was expecting. this book spends alot of time talking about the political situation around the NFL as it relates to African American players, and the authors opinions about that situation.

Not the best story

Big John Feinstein fan. I’ve read most of his books. Have to say this book lacks depth. A lot of play-by-play from the season, but not as much inside information as would like.