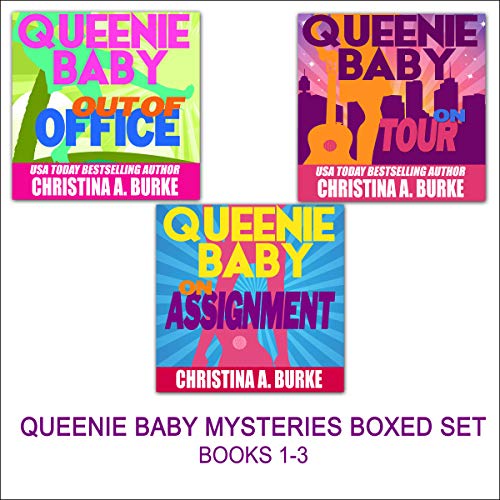 Written by: Christina A. Burke
Narrated by: Angel Clark
Try for $0.00

Queenie Baby: On Assignment (book one)

Meeting your hot new boss in a bar while singing karaoke - bad. Being fixed up with your old high school boyfriend by your meddling sister - annoying. Making out in your sister's minivan with said boyfriend - embarrassing. This week is shaping up to be a doozy for aspiring singer/songwriter Diana Hudson.

"On the wrong side of thirty" according to her mother and still living the bohemian lifestyle of a musician, Diana is having a double martini day. Although a sought after performer on the not-so-happening Annapolis, Maryland, bar scene, Diana works as a temp at Greene's Staffing to pay the bills. Her mysterious new boss, Mark Greene, smells so good she'd like to hang him from her rearview mirror, and her chiseled, super-sexy high school sweetheart, Rick Ellis, is back to sweep her off her feet. When Diana's love life goes from nonexistent to off the charts, will she give an old romance a second chance? Or will she take a chance on new love?

There's no turning back now for temp-by-day and rock-star-by-night, Diana Hudson. She's left Annapolis, Maryland, to take a chance on love and to track down the singer who's stolen her song. What starts as a romantic rendezvous with new love on the paradise island of Puerto Rico quickly becomes a wacky cross-island adventure featuring a high speed guitar chase, a bull fight, and a swashbuckling pirate. Back home on dry land, Diana prepares for the annual Renaissance Fair and a visit from The Grands. With her career heating up, her family closing in, and her heart on the line, how will Diana keep it all together?

For temp-turned-rock-star, Diana Hudson, touring with a Pirate Rock band has been a whirlwind. The Pirate-Heads' Bash in Key West is the last stop on their tour, and she's ready to hang up her sword and play house in Annapolis, Maryland, with her uber-sexy boyfriend, Mark Greene. But her plans hit a sour note when Diana receives sinister scrapbook pages depicting her demise. A series of near-miss accidents and a meeting with an old enemy confirm she's on borrowed time. Hunted by a hitman known only as The Spider, Diana and Mark embark on a madcap adventure to outwit the unseen predator. Instead of rest and relaxation after the long tour, Diana finds herself battling pirates at sea, dodging explosions, and hiding out with The Grands. Will Diana uncover the identity of the hitman before he finds her? Or has she already been snared in The Spider's sinuous web?

Book 1. Beyond crazy hilarious and out of this world entertaining. A lesser mam than Mark would have turned tsil and ran for his life!!!
Mark had sketchy criminals in his family , but Diana had the market on certified, insane herself and family . If you're smart don't waste time listening to the rest. Stop after book 1 and cut your loses. This is time you'll never get back. Diana was likeable, but turned 2 faced and had double standards and became more selfish if that's possible. She was like a dog in estrus. Book 2 and 3 are nonsense drivel and filler for a storyline. A huge waste. The shine of book 1 wore off quickly in the rest of the books. Cut your losses. I voluntarily listened to a free copy of this and am giving an honest review. The narrator was okay.

I was enjoying this book a lot, laughing along with Queenie Baby and her ever-escalating love life, but a few hours into the first book there was a scene that really just socked me in the gut. The scene depicted a transgender person not just with all kinds of harmful stereotypes, but had other characters actively ridiculing the person because of their transness. As a transgender person, it really hurts coming across scenes like this that actively demean and diminish trans people. I just couldn't read past that point because the harmful slurs against trans people continued into the next scenes.

I'd recommend, if you're trans, steering clear of this book. Which makes me sad, because it was otherwise an enjoyable book. The only stars I'm giving this book are for the narrator's performance, which was excellent. Otherwise, I can't recommend this.

I received a free review copy at my request and voluntarily left this review.

Mayhem in the life of Queenie, she is a bit of a klutz and finds herself in odd situations. This three book set is a delightful to listen to. Have listened to Clark before and she has a good clear voice and adds to the stories. Given audio for my voluntary review and my honest opinion

All three cozies in one set. Cute, clean cozies. Angel Clark did a good job on the narration. I have heard her narrate other books and am accustomed to her style. Try a sample if you are not familiar with her. The three stories follow Queenie baby with her family and romantic interest. Pirates, mystery, humor and romance make for a fun and easy listen.

This ook would be a bit better had the narator not been so silly. The book is a bit toooo ordinary. I wanted more action and more tention.