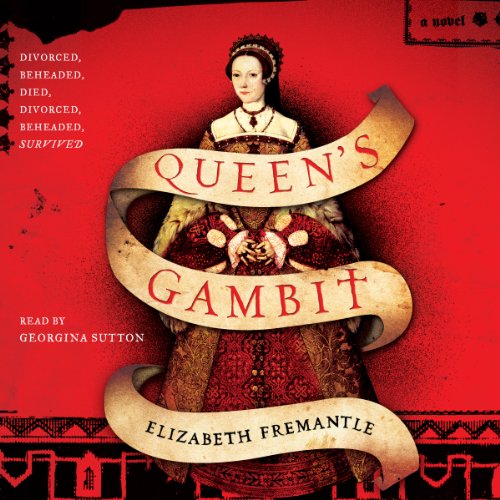 Written by: Elizabeth Fremantle
Narrated by: Georgina Sutton
Try for $0.00

Widowed for the second time at age 31, Katherine Parr falls deeply for the dashing courtier Thomas Seymour and hopes at last to marry for love. However, obliged to return to court, she attracts the attentions of the ailing, egotistical, and dangerously powerful Henry VIII, who dispatches his love rival, Seymour, to the Continent. No one is in a position to refuse a royal proposal, so haunted by the fates of his previous wives - two executions, two annulments, one death in childbirth - Katherine must wed Henry and become his sixth queen.

Katherine has to employ all her instincts to navigate the treachery of the court, drawing a tight circle of women around her, including her stepdaughter, Meg, traumatized by events from their past that are shrouded in secrecy, and their loyal servant Dot, who knows and sees more than she understands. With the Catholic faction on the rise once more, reformers being burned for heresy, and those close to the king vying for position, Katherine's survival seems unlikely. Yet as she treads the razor's edge of court intrigue, she never quite gives up on love.

What listeners say about Queen's Gambit

more romance less history than I prefer. a bit much harlequin for my mere tastes

Both the writing and the narration are beautifully rendered. Elizabeth Freemantle is truly talented, and this is a masterpiece of historical fiction. Her work surpasses Alison Weir and Philippa Gregory. I wouldn't even put her in the same category. The characters jump off the page. The story so moving and engaging.
A must read for historical fiction fans!

I'm pretty well versed in things Tudor. I have a minor addiction. I have listened to all the histories and major Tudor historical fiction authors that I could find. This was a new author to me, and I was pleasantly surprised at the author's incredible talent of weaving compelling characters into a fascinating story that is new and absorbing, despite the fact that I know the historical facts already. I'm thrilled by this find!

This is the story of Kate Parr. The last queen of Henry VIII. A widow 2x over, she has fallen in love with a nobleman, just when the king's eye has fallen on her. When Henry decides to marry her, she has no choice. For the lately dubious honor of being Queen of England, Kate Parr is forced to marry a fat, old, stinking tyrant who has killed multiple wives and many of his closest friends without a second thought. After the premature death of 4 queens, Kate Parr must tread lightly to keep her own head. This is the story of how Katherine Parr survived the bloodlust of the tyrant King to be the one queen who survived...

Kate Parr is a multi-faceted character, intelligent, brave and compassionate. Her story is dramatic and compelling. Freemantle has written a marvelous novel, which also tells the interesting stories of the characters around Parr. This book reminds me of what novels should be.

*I just bought her other 2 books and can't wait to listen to more of this author.

you won't be disappointed

I was a little unsure of purchasing this book, just because I'd never heard of the author, but I'm so glad I did. If you like historical fiction novels, then you're in for hours of captivating listening. I'm so excited to download another title from this author. Hopefully they'll be many other titles similar to this one in the future.

If you love English history, and the descriptions of life in the court of Henry VIII, spend a credit on this one.

Yes, absolutely. Never read anything about the final wife of Henry VIII. DId not know she was a quasi-scholar and published author. Fascinating.

What other book might you compare Queen's Gambit to and why?

Alison Weir's book on Elizabeth I.

If you could rename Queen's Gambit, what would you call it?

Beautifully written, I absolutely loved every minute of it... Narration was Superb and entrancing... Great

We are truly lucky as modern women. Catherine Parr's story is heroic and interesting. She was was a women in a man's world. She probably had know idea how women would look up to her and be curious about her story in the future. Elizabeth Fremantle books always pull me in and keep me looking for more. I hope Audiable gets more of her books!

Katherine Parr got it right!

What did you love best about Queen's Gambit?

I loved how wise Katherine Parr was in keeping true to who she was while still keeping Henry happy. It could not have been easy for her given Henry's health and obvious mood swings. I feel bad for her though because she so loved Thomas Seymour and he was just a player. He saw her as a path to the throne and she let her heart get in the way of her brain. So sad that she died the way her sister in law had died.

What other book might you compare Queen's Gambit to and why?

Which character – as performed by Georgina Sutton – was your favorite?

I love most books about this period of time and this is no exception. I truly enjoyed this book.

Fills in gaps in a delightful way

The author has presented a deep, balanced view of the conflicting forces behind the religious reformation of Henry's court woven into a compelling story of Katherine Parr and her ladies. Highly entertaining dose of history.

Sometimes it's NOT good to be the queen


The book follows Katherine Parr’s marriage to King Henry VIII, and after Henry’s death, her marriage to Thomas Seymour. As Henry’s sixth wife, Katherine knew her position as queen was precarious. She did not want to marry him, but once he set his eyes to her, she had no choice.

Katherine Parr has always been my favorite of Henry’s six queens. She was undoubtedly very smart and charming. She learned from the mistakes of her predecessors, and successfully navigated the religious and political court intrigues. This was made even more difficult because Henry’s Catholic advisors had her on their hit list due to her Protestant beliefs. Fremantle has done an excellent job of showing us a strong and brave Queen.

It is sad to me that she survived her marriage to Henry, only to be betrayed by the man she truly loved and die in childbirth. She deserved so much better than that.

I also liked that along with Katherine’s story, we get points of view from those around her: her physician, her step-daughter, and her servant. Their stories are also intriguing and give a better understanding of life in those times.

Georgina Sutton’s narration is very good, and added to my enjoyment of the story. She is passionate without being over-the-top. She captured Katherine’s voice very well.

After finishing this book, I added Fremantle’s other titles to my wishlist.