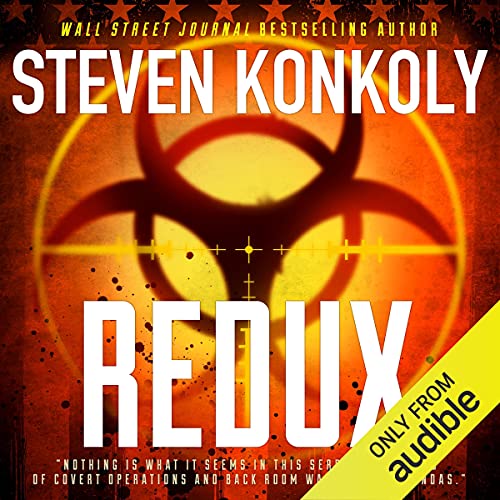 Two years after shocking Washington, D.C., with a brutal betrayal, General Terrence Sanderson prepares for his triumphant return. With his illegal covert operations group resurrected, he waits in the shadows for the right moment to demonstrate the grim necessity of the Black Flag program. His opportunity may arrive sooner than expected.

At Langley, Karl Berg is appointed to a new position within the CIA's National Clandestine Service. As senior liaison to the Weapons of Mass Destruction (WMD) Intelligence Center, he makes a disturbing discovery. Russian Federation intelligence services are secretly scouring Europe to find Anatoly Reznikov, a rogue Russian scientist at the top of every nation's WMD watch list.

Criminally obsessed with reviving a project long banned by the Russian government, Reznikov has finally found partners willing to fund his horrifying research. While the Russians pursue Reznikov, Berg goes "off the books" again and sends one of Sanderson's Black Flag teams to investigate.

Led by Daniel Petrovich, the team uncovers a twisted and devastating conspiracy aimed at the United States and its European allies. With the help of Berg's shadowy network, an unlikely team of "illegal" operatives races against the clock to find Reznikov, before the Russians eliminate their only link to the emerging worldwide threat.

As always, nothing is quite what it seems in this gritty world of covert operatives, rogue extremists and back room Washington agendas.

What listeners say about REDUX: A Black Flagged Thriller

A fun ride that pulled me in!

The second book in the Black Flagged series delivers for the spy loving thrill seeker. Separate from the first book, Redux is really the start of the series. I recommend reading the first Black Flagged book, it’s good and it gives you some background on the main players and their situation but it’s not necessary to enjoy Redux which gives you enough background so that you’re not left in the dark. It takes a little while for it to get going but when it does the action keeps coming non-stop to the end with a little twist to keep with the structure established in book 1. The book pretty much wraps everything up, but leaves some things hanging so it gets a push for me on my complete story test. Redux grabbed me and pulled me in finishing it in less than 7 days, I highly recommended it.

The narration was very good but there were a couple of editing issues which the author has said he will have the audio team fix. Either way it doesn't take away from this great story which you can get lost in.

Yes, but there's a subtle story-line here that is a bit too patronizing of the federal agencies. As a veteran of the military and many year in overseas special operations I assure all readers that the FBI, ATF, NSA, and DHS are NOT in business to protect and serve American citizens. They exist to protect and serve the most powerful political elite in Washington - and no one else. The military services, and to some degree the CIA, are generally of a different camp. These "overseas-oriented" communities are generally distrusted by the domestic agencies, and for very powerful political reasons. Mr. Konkoly does good service to the reader in this regard.

I am a bit troubled that Steve Konkoly would give any deference at all to the "good" intentions of the DEA and ATF's anti-firearms initiatives. The Justice Departments anti-2nd Amendment initiatives have sinister origins and are principally focused on control of Americans, and the drug-control war is a secondary altruistic interest that serves for convenient info-op purpose.

I ask the reader's patience with my diatribe here: It took me nearly 30 years as an officer in uniformed service to wake up to what the US Government is all about. As a vet of some of these programs somewhat cloaked in Steve Konkoly's "Black-Flagged" series, I assure the readers that at the core of their purposes, the senior leadership of the FBI, ATF, DEA, NSA, and DHS are NOT in the business to protect and serve American citizens. Their main priority above anything is to protect and serve the most powerful political elite in Washington - and no one else. The military services, and to some degree the CIA, are generally of a different camp (though not always). The defense community especially, tends to draw the "incorruptible" at an early age. These young soldiers, marines, sailors, and air-warriors grow up in their branches with a first-hand disgust of politicians. When they assume high offices, former military people are, as a general rule, distrusted by the Washington insiders and for very powerful political reasons. Mr. Konkoly does good service to the reader in this regard.

Great storey.
Maybe too close for confort. ...the way the world is today. Can't wait for number 3.

This story about a fugitive and hidden covert operations group sends a team of its top operatives to dangerous locations to stop a possible terrorist attack with biological weapons. The team of operatives heads off from one location to another with little or no planning. They take on and miraculously survive conflicts with larger units of Russian Spetsnaz special operators. It is an action-packed story for action lovers.

can't wait to start the next book in series. this book keep me wanting to listen more and more. Great action and visualizations.

Great story, but the narrator is a deal killer.

The story was thrilling. Not quite Tom Clancy, but close. But the narrator John Farrell is a deal killer. It was difficult to tell when he changed to different character. And supposedly gruff men sounded like women's voices, and the women sounded like men. It makes me appreciate just how talented other narrators are

But I will NOT buy anything narrated by John Farrell again. Too bad.

What was one of the most memorable moments of Black Flagged Redux?

The detailed descriptions of the equipment used. Very informative.

Who would you have cast as narrator instead of John Farrell?

Do you think Black Flagged Redux needs a follow-up book? Why or why not?

Lots of Talking, Many few Details, Not Much Else

Books 1 and 2 are so similar that the same review works for both.

I'm not sure what kind of story this book was trying to be, but I don't think it reached it. While I enjoyed "The Jakarta Pandemic" by the same author, this story is rather bland and mostly uninteresting. Though, while I think the narrator was partly responsible for this, the writing style is mostly to blame.

Book 1 starts out somewhat perplexing, as it wasn't clear who the good and bad guys are. So many characters introduced, it was hard to keep them straight, particularly when you didn't know if they were important or not. It continues like this for many chapters. I considered stopping and moving to another book, but it never got quite bad enough to quit it. A decision which I later regretted.

Throughout both books, there really never was a main character. I think there was supposed to be a protagonist, but many minor characters had more "screen time" than he did, it's fair to say there was no main character in this series. For me, this made it difficult to follow the story path.

Both of these books had lots of details on minutia that wasn't needed and made the story drag on. It featured various groups of characters talking endlessly. For example, we're given the name of every street and road that characters see or travel on, nomenclatures for weapons and military hardware, and so on. Usually, hearing about what kind of equipment the character is using is fine with me, but in these books, most of the time it seemed out of place.

Though there weren't many, the action sequences were better than the non-action parts of the story. The author takes too much time setting up the various pieces of the puzzle before getting to the heart of the plot. Many of the action scenes are like the movie Groundhog Day, where you - as the reader/listener - relive the scene several times, each time from someone else's point of view. This was both annoying and boring.

Personally, in book 2, I think the more interesting story would have been the Russian inhabitants perspective in Monchegorsk.