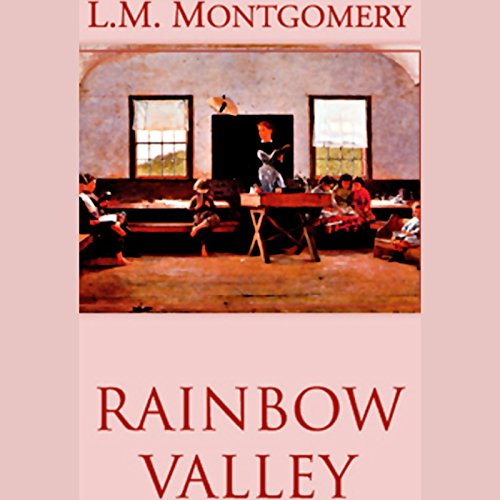 Written by: L.M. Montgomery
Narrated by: Grace Conlin
Try for $0.00

The winsome Anne Shirley is grown, has married her beloved Gilbert, and is the mother of six frolicsome children. Anne and her family experience some unimaginable events when a strange family moves into a nearby mansion. The Meredith family is comprised of two boys and two girls, a minister father but no mother, and a runaway girl named Mary Vance. The clever and mischievous Meredith kids join Anne's children in a private hideout to carry out plans to save Mary from the orphanage, to help the lonely minister find happiness, and to save a pet rooster from becoming a soup ingredient. The sun-dappled world of Rainbow Valley is always full of adventure and delight.
(P)1995 Blackstone Audiobooks
Growing Up & Facts of Life Classics Education Relationships
Show more Show less

What listeners say about Rainbow Valley

Low point of the series

While an entertaining and fun book, the core characters in the "Anne" series just make cameo appearances. I think this was one of the books L.M. Montgomery wrote because she was pressured to, so somehow it doesn't quite reach the level of Anne's House of Dreams or Rilla of Ingleside. One can't help being annoyed with a father who is so absent-minded that his children are in constantly in danger of serious harm, but is quite able to pay enough attention to find a wife, who is obviously meant to devote her life to raising his 4 children (dear as they are).

The narrator does not add to the listening experience at all. At least once every five minutes, she emphasizes the wrong word in a sentence, does not bring out the different characters with different voices, and is generally flat. I would have given the book 4 stars otherwise.

Life on the Island

Really good children's stories are not about children nor exclusively for children. "Heidi", Joanna Spyri comes to mind. "Heidi" is a story about adults and adult behavior told from a child's point of view. Further I offer: "Pollyanna", Eleanor H Porter; "A Little Princess", Frances Hodgson Burnett; "Rebecca of Sunnybrook Farm", Kate Douglas Wiggin; and since we are reviewing Lucy Maude Montgomery, "Anne of Green Gables". In every case, it is the adults who are the central actors and in whom great changes were wrought even while the spotlight follows the child star.

Rainbow Valley certainly is not equal to the above works but it is packed with funny stories and wonderful tiny adventures. In one place, a pompous minister's coat tail caught on fire in the midst of a solemn lecture. Another time a girl wrote a little too truthful letter to the editor which put the town into an uproar. Then there is the pet rooster which gets to participate in Sunday dinner. Besides, every book doesn't have to be the greatest. Pretty darn good is not a bad ranking particularly for the prelude to that really terrific Montgomery work, "Rilla of Ingleside". I have enjoyed a number of Audible titles which are merely pretty darn good, Angela Thirkle and Laurie Viera Rigler come to mind.

Isn't it interesting the difference between how the schoolyard fight was handled and how it would be treated in one of today's schools where typical boy behavior is criminalized? Police, handcuffs, courts, family service...oh, egads! There many other differences which make me think that all our progress is less than stellar;instead is a loss of our humanity. Some progress.

Oh, I almost forgot to mention the narrator, Grace Conlin. She became invisible to the story after a time, which I think is a kind of compliment. I didn't notice her presence except to say I enjoyed the story.

This was a really cut story of Ann's children and neighboring kids getting into mischief.
It did drag on a bit but not to bad.

Great narrative and story!! I really enjoyed it and was pleasantly surprised that it was a freebie!

Anne of Green Gables is a timeless series that delights all ages! I found it utterly charming.
A charismatic narration!

This is an old favorite, and it's a shame that it's probably lesser known in this series. This narration is excellent, well read by Grace Conlin, who has a beautiful, well modulated voice.

Not as good as the previous Anne books

This book wasn’t about Anne at all, it was about her kids, and even more so about the neighbors kids. It’s didn’t have the same magic and whimsy as the other books. The narrator of this one also didn’t have as wide of a vocal range for the different characters as other narrators of the previous Anne books on audible.

Lovely story full of real and beautiful characters. You d and old alike would love this story.l

I was so sad when it was over. So many real characters and personalities. They seemed like real friends. The reader was amazingly beautiful in her narration.

I did enjoy it, what a pretty voice to listen to a beautiful story. I do think the southern states twang a bit off for some of the characters.