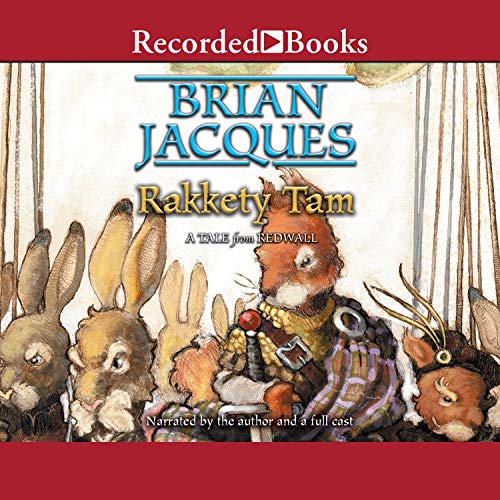 New York Times best-selling author Brian Jacques has millions of copies of his phenomenally popular Redwall series in print. Fans cannot get enough of the feasting, fighting, and fantastic adventures that fill every book.

A horrifying creature has landed on the shores of Mossflower country: Gulo the Savage, a wolverine who is known to devour his enemies' flesh. Gulo intends to kill his brother and seize a mighty relic known as the Walking Stone. But standing in Gulo's way is Redwall Abbey and a mercenary squirrel named Rakkety Tam MacBurl. Soon, the Mossflower woods are ringing with the glorious sound of battlecries, as an epic battle that tests the bonds of comradeship begins.

Thanks to the extraordinary vocal talents of a full cast of accomplished performers, joined by the author himself, each wondrous character is fully brought to life, and Rakkety Tam becomes a riveting listening experience that is not easily forgotten.

"The colorful writing style, the strong cast of characters, and twisting plot will continue to delight fans of the series." (School Library Journal)

What listeners say about Rakkety Tam

It took me a bit to get used to the harsh accents that the many different readers "actors" give to the charactors of the book. Soon I found I counted on them to help distinguish the different charactors as there are many. Before long I was captivated by the story which was well worth the purchase. One of those books you would not mind finding it is one of several in a series as you didn't want to let go of the charactors in the story.

Mole language does not change a bit just weird not intellible

My 10-year-old son and I are both big Redwall fans, and the warrior squirrels Rakkety Tam MacBurl and Doogie Plum are two of our favorite characters ever. The story is exciting and even a bit suspenseful in spots, as Jacques deviates a bit from the normal formula. Four enthusiastic thumbs up.

I am a 5th grade teacher and have never been disappointed by a Brian Jacques work. Whether it's a book in the wonderful Redwall family or one of his unrelated works like Castaways of the Flying Dutchman; Jacques remains a masterful storyteller. I agree with other reviewers that it takes a chapter or two to "tune" your ears to the accents of the wide variety of creatures and characters, but once that is done you're in for a fantastic, morally sound tale suitable for children from 9-99. Enjoy!!

Loved the book & the audio quality is great.

The book is fun, exciting & entertaining. The audio is great, especially if you download at a 4. Brian Jacques books are good clean fun.

I remember listening to the Red Wall series when I was younger. From the plot, to the vivid descriptions of the food and desserts, Brian Jacques, has an uncanny ability to sweep you away into an other world.

One of my Favorite Audiobooks

I adore this audiobook. It is probably one of my favorites of all time. The author writes the accents of the different creatures into the speech of his novels, which can make it a bit difficult to understand what is being said while reading a written copy of the book. However, the narration of the audiobook brings these accents out and makes them so much more enjoyable and understandable. I also love how music is added to the songs written into the book, and instrumentals of those songs are used as transition music between the chapters. I love hearing the instrumentals, then listening out for them throughout the rest of the book to see where they are actually used/sung. Since the main narrator is the author, it makes me want to believe that the accents and music are true to how the author intended them to sound, making the story come so much more alive than just a book in your hands. The audiobook is so well done, with the author and the full cast narration making Rakkety Tam an audiobook I can listen to over and over and truly enjoy the experience every time.

I love this book. I have listened to to it more time than I care to admit and each time it gets better

Best of Brian Jaques. And I’ve listened to all of the audible redwall series I know of. Amazing

Mediocre story. The villain is VERY weak. Formulaic plot. A lot of padding.

Still entertaining though. Jacques is a good writer.