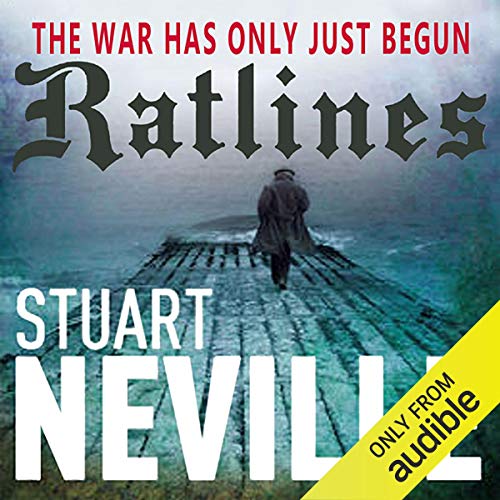 Editors Select, January 2013 - I listened to Stuart Neville’s debut novel Ghosts of Belfast 3 years ago, and was totally swept up by his seamless blending of fantasy into an IRA noir thriller. In Neville’s next two novels he delivered solid thrills, but they were slightly more traditionally drawn. But when I heard about his newest stand-alone Ratlines, I knew I had to listen to it. He heads back to his old narrative stomping grounds of an Ireland at war with itself, while bringing in an alternate history element involving Nazi stowaways. It doesn’t get more chilling than that! —Emily, Audible Editor

Ireland 1963. As the Irish people prepare to welcome President John F. Kennedy to the land of his ancestors, a German national is murdered in a seaside guesthouse. Lieutenant Albert Ryan, Directorate of Intelligence, is ordered to investigate. The German is the third foreigner to die within a few days, and Minister for Justice Charles Haughey wants the killing to end, lest a shameful secret be exposed: the dead men were all Nazis granted asylum by the Irish government in the years following World War II.

A note from the killers is found on the dead German's corpse, addressed to Colonel Otto Skorzeny, Hitler's favorite commando, once called the most dangerous man in Europe. The note simply says: "We are coming for you."

As Albert Ryan digs deeper into the case, he discovers a network of former Nazis and collaborators, all presided over by Skorzeny from his country estate outside Dublin. When Ryan closes in on the killers, his loyalty is torn between country and conscience. Why must he protect the very people he fought against 20 years before? Ryan learns that Skorzeny might be a dangerous ally, but he is a deadly enemy.

“Thrilling.... Readers will hope to see more of Ryan, a formidable yet damaged hero." (Publishers Weekly)
“Another moody winner mixes Nazis into Neville's usual Irish noir.” (Kirkus Reviews)
"Neville, whose debut, The Ghosts of Belfast, won the 2010 Los Angeles Times Book Prize for Best Mystery/Thriller, concocts a believable plot with an intriguing protagonist torn between duty to country and his distaste for Nazi criminals. Fans of Jack Higgins and Ken Follett will enjoy this novel." (Library Journal)

As expected from Stuart Neville, this is a good, solidly crafted story that quickly captures the imagination with a morally complex mystery set in 1963 Ireland. The title "Ratlines" refers to a system of escape routes through Europe utilized by Nazis after the end of WWII. Having never heard the term before, I was surprised when a quick internet search revealed that the novel's villain, Otto Skorzeny, was not only a real historical figure, but the very Nazi who masterminded the "Odessa File" underground railroad for fleeing fascists. As Neville expertly builds a multi-layered foundation for his story, much is explained about Ireland's role in WWII. A large portion of the Irish population seemed to believe the old chestnut, "the enemy of my enemy is my friend." Unfortunately, Ireland's neutrality and some citizen's quiet support of Hitler's war with Britain brought the country to the slippery slope that is the background of "Ratlines."

Some reviewers have taken exception to Alan Smyth's narration of this book. While I see that Neville's previous titles are in my Audible library, I must not be as passionate about their narrator, the truly excellent Gerard Doyle. I thought Smyth's Irish accent pleasant and understated. A testament to Smyth's versatility is his ability to handle the narrative cocktail of several different European accents (so many old Nazis popping up!) with a South African and American chaser. He disappeared into the story and that's my definition of great narration.

Finally, I feel compelled to tell you that several scenes in this book are quite graphic in their description of torturous interrogation. I mean quite graphic. I mean, I pulled my earphones out for awhile, then listened again for a sec, then pulled them out for another while. To the author's credit, the scenes are so chillingly real, the dread experienced by the characters was easily grasped, giving further understanding of how fear drove their actions - and inactions.

I love Neville's trilogy and they are a few of the not many books I've listened to over and over. Gerard Doyle is terrific as their narrator. I'm still on part one of this novel and have had to backtrack several times because the narration is so boring and strange. Weird accents come and go with the main character sounding American and bad Irish depending on a whim. It's just too distracting. I'm debating buying the kindle version. The story seems interesting but I just can't stay interested due to Mr. Smyth's reading of it.

I'd recommend reading this one.

Some people have commented on the narration and if you listend to, and liked Nevill's earlyer books narrated by Gerrard Doyle you should listen to the sample and see how you like Smyth's narration and it would not have been fitting to have Doyle narrating this one, it is not a part of the Jack Lennon series.

What happened to Neville? This one's ratty!

Maybe the loss of Gerard Doyle's authentic voice mortally wounded this novel? Alan Smyth simply lacks the tongue for these characters. No, that's a necessary but not the essential reason that Ratlines is ratty. Neville asks us to accept too much of his protagonist's body and character. Albert Ryan, the lead character is a serial shark jumper. Imagine two solid days of gruesome torture, then imagine with virtually no rest voluntarily lifting huge chests, after a demanding sea voyage ?! Neville is almost contemptuous of his fans in this one as he rolls out a string of characters each with the depth of parking lot puddles. I have reeeeely enjoyed Neville until now. Perhaps I'll try another if Gerard Doyle creates his characters for me. Perhaps, I'm really disappointed wit Ratlines.

To second reviewer Deborah: if you find Gerard Doyle's standard of narration essential for an excellent listen, consider getting this in print. Smyth is very competent and although I'd listen to him in other novels, he is not a match for a Neville Ireland-set tale. This maybe good news for listeners not fond of Irish inflected vowels, however.

Apart from the narration, I think this is as a good a novel (plot, character, setting, atmosphere) as Ghosts of Belfast - even richer because it is excellent historical as well as crime fiction. Grounded in the larger lines of history but with fictional details, it captures the moral complexity of real life. Neville avoids creating black hats/ white hats compared to much best selling historical fiction.

There are, however, as in real life, generous doses of torture, beatings and murder.

I enjoy detective and historical fiction but try to stay away from the violent stuff out of fear of becoming desensitized to violence -- but, I think by staying "real" -- by avoiding glamorizing adventure and espionage, this Neville novel doesn't make violence entertainment for entertainment's sake. I found the violence "wince factor" higher in this Neville, however - and that may be due to my narration preference.

Including the JFK angle in the storyline might appeal to a larger audience than earlier Neville -- thus the choice of the more standard General English narration I guess -- that choice has debatable merit. Without Doyle's narration, I doubt I would have found even Ghosts of Belfast so engaging. He was able to expand on author Neville's nuances of class, sectarian and generational differences beyond the printed word. I spent as much time wondering what a different narrator could bring to Ratlines as I did thinking about the moral complexities raised by Neville, and that is unfortunate. Narrators matter, especially in an assembly of characters such as this.

Did not live up to Neville standard

I have only read Lost Souls but I was expecting the same high quality narration, character building and plotting skills. This book has a fascinating topic, Nazi's harbored in Ireland after WWII, but the predicable yet confusing plot could have been placed in any thriller setting. We never got to know any of the characters so they stayed flat and the book hung itself on the story, which had many twists (good IMO) but little intrigue. I will keep trying Neville however.

Why oh why did the publishers move away from Gerard Doyle as a narrator for Stuart Neville's books? I actually returned this one because I couldn't bear to hear Alan Smyth read one more word of Stuart Neville's fine writing. Forced character voices and a wretched habit of hitting sentences with false emphases and exaggerated emoting which made it sound like it was being read by an adolescent. Narrators like Gerard Doyle, Michael Kitchen and Anton Lesser elevate and enhance the experience without distorting the tone of a novel. I wish publishers (or whoever chooses the narrators) would take more care.

What was most disappointing about Stuart Neville’s story?

Not about WWII or much about Ireland.

Do you think Ratlines needs a follow-up book? Why or why not?

No! One bad , confusing book should not be followed by another.

Unless you can't sleep, pass on this one.

It was interesting and had some good twists.

If they were interested in WW2 fiction. It's worth a free credit.

What was one of the most memorable moments of Ratlines?

Could you see Ratlines being made into a movie or a TV series? Who should the stars be?

I actually could, but have no idea who would be main characters.

It wasn't bad. If you're thinking about getting it you should. It's worth the credit and your time to listen. I realize its a difficult job but the narrator could have done better and takes some getting used to.

Oh, I liked this! Neville is one of my pre-order authors but I'm just getting caught up on his books.

Nazis, Mossad, Irish G2, bad guys, good guys who could be bad guys, I loved it.

The audio production, not so much. Smith's voice was great and his accents were okay but why do production people not verify pronunciations?