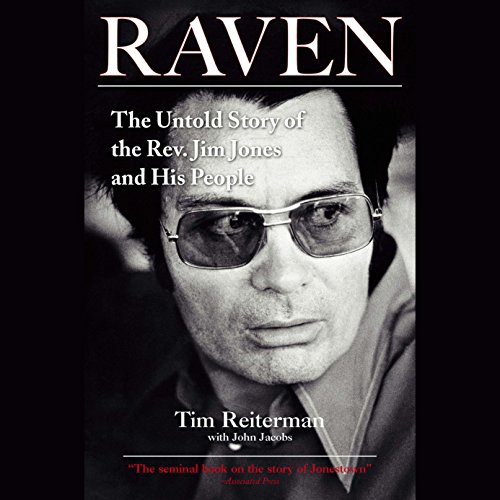 Written by: Tim Reiterman
Narrated by: Mitch Horowitz
Try for $0.00

The basis for the upcoming HBO miniseries and the "definitive account of the Jonestown massacre" (Rolling Stone).

Tim Reiterman's Raven provides the seminal history of the Rev. Jim Jones, the Peoples Temple, and the murderous ordeal at Jonestown in 1978.

This PEN Award-winning work explores the ideals gone wrong, the intrigue, and the grim realities behind the Peoples Temple and its implosion in the jungle of South America. Reiterman's reportage clarifies enduring misperceptions of the character and motives of Jim Jones, the reasons why people followed him, and the important truth that many of those who perished at Jonestown were victims of mass murder rather than suicide.

This widely sought work is restored to print after many years with a new preface by the author.

“The definitive account of the Jonestown massacre; Reiterman was among a group of journalists, concerned relatives and congressional aides to accompany Congressman Leo Ryan on the ill-fated journey to Guyana to survey Jonestown.” (Rolling Stone)

“The seminal book on the story of Jonestown.” (Associated Press)

“Unquestionably emerges as the most valuable book on Jonestown to date.... Every piece of the puzzle is here.” (David Evanier, National Review)

What listeners say about Raven

the story is long but it is worth it to fully understand the massacre in Jonestown. This story is haunting and at times infuriating. Jim Jones is the epitome of evil. Using notions of equality, social justice and even socialism as bait for a trap that would cost the lives of nearly a thousand people, over three hundred of them children as young as a month old.

To understand how this could happen in the first place is important and this book helps in that understanding.

Even though at times the text in this book is dense and thick with information, reader Horowitz kept me enthralled at all times, never falling into a monotone. The quality of the book combined with the quality of the reading makes this a true treasure. I can not recommend it enough.

This was a fascinating and detailed look at Jim Jones and his twisted mind, from the time he was a very young boy, until his last day in Jonestown. He may have been the mastermind of The People's Temple but he was not alone in his journey. His own family and closest followers and co-conspirators are profiles here; too. A thoroughly researched piece of work. There is nothing left to know. The narrator was excellent; suitably somber without being boring.

As you can't break down the book into parts, I riffled between 4 and 5 stars.
For the most part I was riveted.
This book was extremely extensive. This was a good and a bad thing. It was so extensive, that I started to feel like I was back in school and I found myself saying, "Okay, I get it. No need to keep reiterating that point, move along."
The author wasn't redundant but the antics of Jim Jones and his followers became redundant.
I find cults fascinating and this book was the most extensive, on Jim Jones, I've encountered to date. Most books on the subject leave me wanting to know more. This book left me very satiated and without the usual dangling curiosity.
If you want to know all the ins and outs of Jonestown and Jim Jones, this is the book to listen to.
The narrator was good, yet very slow so I did have to speed up the playback.

Yes, this book is longer than it needs to be.. a skilled Editor could probably carve 10 hours from the text.. but it actually goes by quite quickly. Tim Reiterman puts together an incredibly well-researched documentary of the rise and fall of Jim Jones and The People's Temple. The book is organized logically, includes voluminous detail (surprisingly without much information that feels extraneous), and provides an eye-opening look into the personalities and motivations that culminated in the 'Jonestown Massacre' (No, it was not a "Mass-Suicide").. claiming 918 lives in the jungle of Guyana on November 18, 1978. The writing is clear, descriptive, and well-paced.

The quality standards for this recording are excellent and the narration by historian Mitch Horowitz is commendable. His diction is clear, he delivers an interested performance, and his level of gravitas is appropriate to the subject matter without slipping into a sombre monotone. The one drawback is that Horowitz's pacing is off (I had to increase playback speed to 1.15X for an optimal listening experience).

When all is said and done, I worried that this painstakingly-compiled thirty-hour recording would be tedious. It's not. Even with slightly suboptimal narration, I rate it 9 stars out of 10 - it's well worth your Credit if you're looking for an in-depth presentation from a reporter who investigated controversies with The People's Temple in California and survived the Airstrip attack on Congressman Leo Ryan in South America. There are several free documentaries (and a very good docudrama) on YouTube if you're interested, but this is a definitive look. I can Highly recommend it.

What a very thoroughly written book!

Obviously this was very well-researched. The reader leaves with a much better understanding of what happened, the people affected, and what went wrong. Many passages were jaw-dropping. It's one of those books you just can't set down.

There is no getting around it, the story of the People's Temple and Jonestown is haunting, perplexing, tragic and so disturbing. We want to distance ourselves from this event. We want to believe that we would never be taken in by an ego maniacal narcissist but there are many Americans who are part of cult groups. Having read extensively about Jim Jones and the people he murdered, I am humbled. This is the most authoritative work on the topic. The authors care in sourcing and researching of every detail is evident throughout and the amazing insight into the final chapter that one of the authors can bring to bear because of his first hand knowledge is powerful.

The book seems well-researched and well written.
It is interesting to hear about the tragexy from the perspective of a journalist and someone who experienced firsthand the events on the airstrip.
Reiterman does a good job taking us on Jim Jones's journey into madness and control. However, I would have preferred if the African-American rank-and-file characters had been fully developed rather than being treated as side players.
The narration was generally very good, and engaging, but at times it seemed the narrator sounded sleepy. I even detected a yawn at one point.

AWESOME!!!! Amazingly researched and written. Narration is excellent. Truly mind boggling that Jim Jones was able to control so many for so long. He was a foul mouth meglomanic , an abuser, a sexual miscreant, but had the ability to control others.

after 3 hours I gave up. this book is insanely slow moving and brings up constantly, small trivial facts that even a jonestown historian would find unnecessary and tedious. the idea of listening to 26 more hours of this book made me want to drive my truck off an over pass.

Lessons and History of a mad man!

If you could sum up Raven in three words, what would they be?

Unbelievable Education Gained! Being only 10 yrs old when this tragedy happened, it didn't really "soak in" what this meant in the realm of history. Almost 40 years later, it has become more interesting to me & I was hoping to learn more about the cult & everything involve. Did I ever!! The research and writing of this book is phenomenal! Impressive research by Mr. Reiterman and all involved brings this entire story to life. I cannot fathom the number of hours, months, YEARS he has put into this project, but he deserves kudos for every minute of it. He & the narrator kept the story moving very well & the education gained was invaluable. I knew the man was insane, but I had no idea the level of deceipt, brainwashing, abuse (both sexual and mental) that went on. DRUNK on power, this man was out of his mind & it's so sad to think of the lost souls that put their entire lives into his hands and believing that he was the God and their answer.

What does Mitch Horowitz bring to the story that you wouldn’t experience if you just read the book?

He kept it moving very well for me. I can't stay that involved for that long, but as he read it to me, I found myself not being able to "put it down".

And I'm not cussing when I say that. Raven is one of ,if not the most unbelievable horror stories I've read.I found it terribly upsetting. What makes it so shocking for me is these people are Americans of all ages and backgrounds. Jones controlled everything about their lives, abused them mentally and physically .They stood by while he abused other Temple members,even the children. Raven does a fantastic job of showing how Jones gained this power over his followers. The book is long but perhaps necessarily so.Tim Reiterman keeps the story flowing,as does the narrator.

one of the most informative books on the topic, i am about to listen to another so I will be able to compare, also a very good narrator which makes all the difference

A recitation of the risks of BEING G-D. Will our egos EVER learn? Well written.

The narrator has a horrible habit swallowing very in very slushy and loud ways that surly could have been edited out. It drove me crazy and I barely could stand to finish this audio book because of it.

The storybis very informative and interesting. Haunting and crazy.

those who forget the past are condemned...

Gripping subject, told by those who lived it. The reader is OK, but it seems like he uses an "evil" tone to voice Jones from the get go, making it hard to relate. At times it is hard to keep track of all the names and personalities going back and forth.

The book drags a bit specially towards the last year of events.
Nonetheless this is a worthwhile and must listen to try and understand how this could possibly come to be.