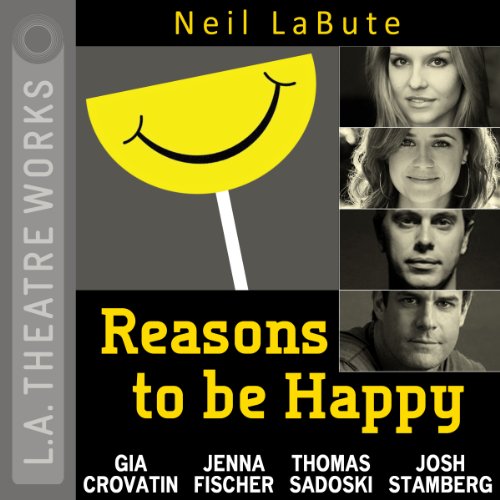 Reasons to Be Happy

In the sequel to Reasons to Be Pretty, Greg, Steph, Carly, and Kent return a little older, but not necessarily wiser. And don’t worry if you haven’t met them before - there’s more than enough humor and humanity to usher you into the second act of their lives. Includes a backstage conversation with Neil LaBute and the cast. An L.A. Theatre Works full-cast production featuring Jenna Fischer, Thomas Sadoski, Gia Crovatin, and Josh Stamberg. Written and directed by Neil LaBute. Recorded by L.A. Theatre Works before a live audience.

What listeners say about Reasons to Be Happy

A respectable follow-up to LaBute's masterpiece

I do think that Neil LaBute will be remembered most for his masterpiece "Reasons to Be Happy" which debuted off-Broadway and eventually landed on Broadway to much acclaim (with a small segment dissenting, the usual sneering). This sequel is totally respectable, and shouldn't be faulted for more of a good thing. I saw Jenna Fischer perform the lead role in the world premiere MCC Theater production, and she's no less memorable in this "radio play" version (though I'll always prefer LaBute regular Fred Weller in the original starring role).

It seems likely that LaBute got falsely "#MeToo"-ed when MCC suddenly dropped the third play in this intended trilogy, "Reasons to Be Pretty Happy," without explanation (or apology). I hope that LATW sees it through to its proper debut.

Pretty much an addendum to the playwright's REASONS TO BE PRETTY continuing the excruciating romance of four mixed up young people. Hard to feel any sympathy for them and you might feel uneasy laughing at their ineptitude and foolishness. Still, a very contemporary tale that seems real.