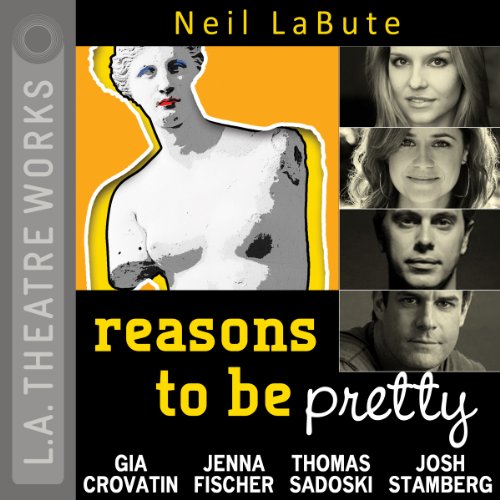 Reasons to Be Pretty

What does it mean to be pretty? Do you really need someone to validate your appearance? Neil LaBute tackles our obsession with physical beauty head-on in a work nominated for multiple Tony and Drama Desk Awards. Our production, directed by the playwright, includes original Broadway cast member Thomas Sadoski, whose acclaimed performance also earned aTony nomination. Includes a backstage conversation with Neil LaBute and the cast. An L.A. Theatre Works full-cast production featuring Jenna Fischer, Thomas Sadoski, Gia Crovatin, and Josh Stamberg. Written and directed by Neil LaBute. Recorded by L.A. Theatre Works before a live audience.

What listeners say about Reasons to Be Pretty

First-rate comic theater with a message.

A play about beauty and mating with a side angle of the responsibility and limits of friendship. Funny play but occasionally frightening in the thematic implications. Be careful if you listen. with a friend or significant other

An exquisite reading of one of my favorite plays

A beautiful interpretation of one of LaBute's strongest pieces. Brutal, heart wrenching, revelatory, funny, too. While it is difficult to believe anyone would challenge Jenna Fischer's beauty, perhaps that is part of the point. The struggle with communication and desire for validation will make the insecure among us cringe, and the seemingly secure recognize pieces of themselves they wish they hadn't. Well done, LATW!

Good performance. Well written. Definitely recommend this play. I don't know what else to say

I wouldn't normally hang with people who are totally self-absorbed so why pay to listen to them talk?