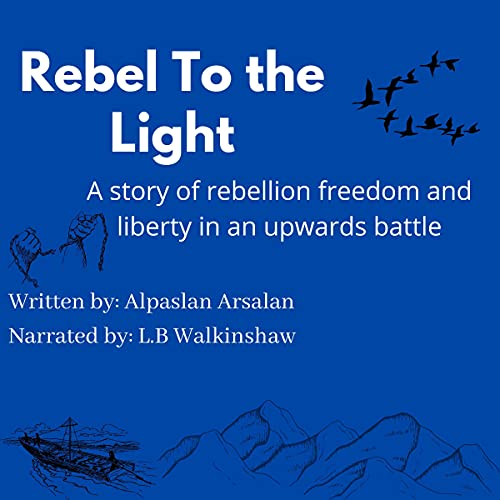 Rebel to the Light

Written by: Mr. Alpaslan Arslan
Narrated by: L B Walkinshaw
Try for $0.00

A day so gruesome, the numbers representing it are burned into my head. It was a normal day on the fields, the usual back-breaking job me and my mother had to do. Under the hot Carolina sun, we had to bend down for almost 16 hours a day. Planting or harvesting rice.

My mom, Nana Asma’u, was an African; she was kidnapped from her village in Liberia. She told me stories of her village. She was kidnapped at around my age while on a trip to the Limba tribe in Sierra Leone. She was a messenger for her tribe; she used to tell me stories of her trips around. But, today, I saw her drop dead; she was the only thing I had, and they took her away from me. I had dreaded the arrival of this day.

My mother was working in the field as usual when she saw Sir Thomas. My mom used to tell me he was our “driver”, she told me that she hated him. According to my mom, he was on the same ship as her. He had been loyal to the whites and became a “driver”. He gets better treatment; he is the one who beats us up. He beat me up every few weeks. I know that he is heartless, he is impossible to work with, he is one of them, even though he looks like us. He was the most hated one of them, he was a traitor.

That day my mom fell in the field, she had been ill for a few days. She ruined a patch of land. Once Sir Thomas came, I expected him to help my mother minimally as she was ill. Instead, he took out his whip, and he whipped her to death. I saw her, dreading, trying to breathe, covered in blood. She stopped trying to breathe and gave up on her life. She was pulseless, she was, dead. I felt terrified, I could not tell if it was anger or fear, but at that moment, I wanted to disappear, to die, or to escape.

This book was written from the point of view of a young enslaved African American named Amari who starts a revolution for a more just, equal system for herself and her people.

What listeners say about Rebel to the Light

I lived in Sierra Leone for almost three years, from that point, I truly value the mix of historical and fictional stories in this book. The mentions of places I know made me nostalgic and gave the book more value to me.

I usually don't leave reviews on anything unless I hate it, the book is very interesting, as a conservative, I feel like it allowed me to emphasize with movements that I used to see as arbitrary and unlawful, I liked that in chapter 20 he related it to the current situation in the US, the narration was nice too, the accent was slightly heavy, but it sounded like a Carolinian accent to me.