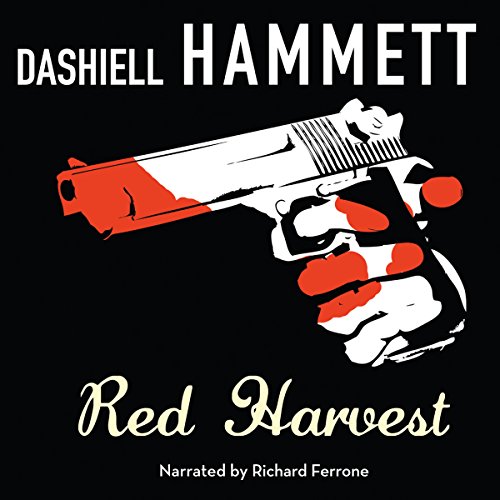 When the last honest citizen of Poisonville was murdered, the Continental Op stayed on to punish the guilty--even if that meant taking on an entire town. Red Harvest is more than a superb crime novel: it is a classic exploration of corruption and violence in the American grain. From the author of The Maltese Falcon.

"Dashiell Hammett is an original. He is a master of the detective novel, yes, but also one hell of a writer." ( Boston Globe)

Performance was spot on.
Classic noir story.
Struggled to finish at some points but worth finishing.

If you could sum up Red Harvest in three words, what would they be?

Would you be willing to try another one of Richard Ferrone’s performances?

Maybe. His narration and voice-acting is great. But there is this audio artifact from the recording where a lot of initial consonants are cut off, probably from an improperly-adjusted noise-gate. So for example, the words "she" and "he" both come out pronounced "E". This is distracting, and it also makes it hard to follow some of what is going on.

But it's just as good. Think film noir. It is a great gangster story from a century ago.

The Op takes the case.

Where does Red Harvest rank among all the audiobooks you’ve listened to so far?

The Op is my second most favorite detective Hammett ever wrote. Right after Sam Spade.

Have you listened to any of Richard Ferrone’s other performances before? How does this one compare?

I listened him do Hammett other Op story, The Dain Curse. His performance in this audio was better.

Yes this was one those books.

I would recommend it, but with the caveat that while this is a good hardboiled novel, listeners wanting to introduce themselves to Hammett should go for "The Maltese Falcon" read by William Dufris.

What was one of the most memorable moments of Red Harvest?

There is one point where The Op gets into a car with some gangsters and, going to another gangster's building, firebombs it like the Rojos in "A Fistful Of Dollars". The whole thing gloriously devolves into huge gunfight in the street.

The Continental Op is, like, the most hardboiled dude in the universe. Before this, I've only listened to Hammett's "The Maltese Falcon" and "The Glass Key", and The Op leaves Sam Spade and Ned Beaumont in the dust.

What aspect of Richard Ferrone’s performance would you have changed?

There were a couple points in the reading where I believed Ferrone was misinterpreting character dialogue. I also think, but am not sure, that at one point he got voices mixed up.

Other than that, I liked him. His gravelly first-person narration adds yet another level of hardboiled to this already ridiculously hardboiled book.

Reading this after the (relatively) restrained "Falcon" and "Key", I was delighted at just how over-the-top the story is. If memory serves, less than ten people die in "Falcon" and in "Key". Here, I wouldn't be surprised if the body count hits fifty. Even The Op seems surprised by it all, given his worries at going "Blood Simple."

In my mind, Hammett essentially took a B-story idea and elevated it with good plotting, prose, and dialogue. This really is a fun book.

Tough-guy noir bloodbath as The Continental Op takes down the entire corrupt city of Personville (based, I'm told, on Baltimore, a city that Hammett deeply loathed.) Fun, fast-moving, with lots of snappy dialogue--and, to my mind, better written than The Glass Key. Just stay alert--there are a lot of names to keep track of.

To keep his company town his own, the owner of the company town, Wilson, brings in thugs to break A strike at a mining company in the 1920s.
It takes eight months to break up the strike but then the true cost begins to become apparent.Those who help break up the strike have no plans to go away from the city that they feel that they now own and control. Battles ensue between the owner of the mining Company and the thugs.

The owner of the mining company brings a man from a company in San Francisco to clean up the town. That man, Dashiell Hammett, is given carte blanche ample funds to use whatever methods he would like to use to restore the town to civility and expunge the thugs.

One thug is a bootlegger, another is a gambler, another is a woman who brokers information, another is the police chief and there more including Wilson who hires Hammett. Also Wilson had a son who came back home to help clean up the town, not knowing that his father was involved in part of its corruption.

The book is a delightful Read. Hammett is only one man. He has to think carefully how he is going to use his Brains, occasionally his Brawn and, and pistol to stay alive, Get control of the town,and decrease the number of thugs in town.

He does this with tact, careful talk, knowing how to be in the right place at the right time, working hard, and realizing how he can take it vantage of one groups anger or misunderstanding and have the various bags fight it out among themselves until he’s the last man standing.

Although the plot may be good, what we enjoy is Hammet and how he does his job.

The language of the time (1920s)has many colloquialisms that we learn through context but these add tremendously to the distraction created by the work. There is much hidden humor and double entendre.

This book is a distraction. In my opinion that’s often what a book should do, distract us from reality for a while and this book draws us in with its well described characters, it’s mini subplots, Practical Criminal philosophy,partial understandings and out right deceit as well as the cleverness used by our hero, Dashiell Hammett, to achieve his objectives.

Richard Ferrone sounds like my Dad. I love the story, but the performance really brought the whole thing home for me.

I read this years ago and liked the style. The reader made it even better.

A story whose twists are matched only by its body count.

Would you consider the audio edition of Red Harvest to be better than the print version?

The audio edition is better than the print edition. Richard Ferrone's voice characterizations were excellent for the large cast of wise guys, coppers and dames.

Red Harvest has the same feel as Maltese Falcon from a mystery perspective, but it is a much grittier, violent story. The self confidence and self doubt of the main character both humanizes him and makes him seem alien at the same time.