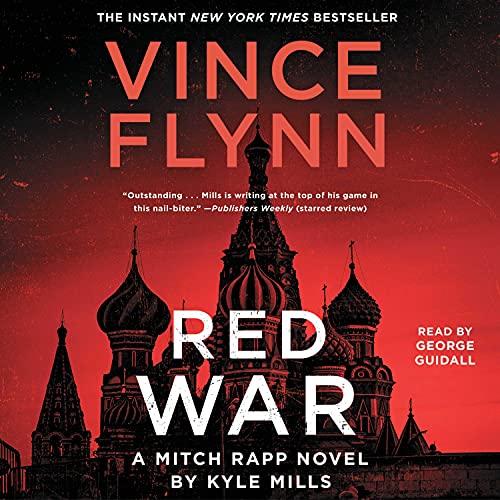 The number-one New York Times best-selling series returns with Mitch Rapp racing against the clock to take down Russia's ailing leader before he invades the Baltics.

When Max Krupin - Russia's leader - discovers that his kidney cancer has spread to his brain, he's determined to hide his diagnosis. He begins by getting rid of anyone threatening to him - as well as creating chaos in the region to keep the world's attention diverted. Soon, Krupin's illness becomes serious enough that he needs a more dramatic diversion, prompting him to invade the Baltics.

Desperate to understand what's causing Krupin's uncharacteristically erratic behavior and Russia's aggressive moves in the region, America begins working with Russia's disgraced prime minister to stage a coup. Its success relies on Mitch Rapp's ability to successfully find and quietly get rid of the ailing president before Europe is drawn into a war with a man who has nothing to lose.

For fans of "black-ops thrillers, Mitch Rapp continues to be among the best of the best" (Booklist, starred review).

What listeners say about Red War

loved it, the perfect background for my commute to and from work. Recommended to anybody who loves spy books

In all fictional suspense novels, you expect a certain amount of implausibility, but Red War outdid all the previous Mitch Rapp adventures in this regard. An Cold War caricature of a villainous Putin-like Russian president with not an iota of nuance or complexity to his character, over-the-top anti-Russian sentiments, an absurd and sometimes cartoonish plot-line, an entirely unlikeable portrayal of the main character Mitch Rapp, all made this my least favourite book in the Vince Flynn series. Even the usually stellar narrator, George Guidall, seemed off his game reading Red War, probably stemming from an awareness he was reading an unworthy addition to the iconic series for lovers of spy novels. Hopefully Kyle Mills will recapture the magic that infused previous books with his next instalment.

really liked this one. can't wait for the next one. will listen to it again for sure

disappointed with the narrator

the narrator speaks in a halting, Kuching fashion if when it is a simple sentence. the story premise seems preposterous, but it's always fun to read if the CIA sticking it to the Russians.

Love this whole series, have listened to all of the books. Definitely recommend to everyone

One wonders whether the George Guidall will ever learn how to pronounce lived. At least he's no longer butchering Anna's name.

This was not a Mitch Rapp novel! He's a tag-along.

What a great disappointment. I purchased this book and the accompanying audiobook so I could enjoy another adventure with Mitch Rapp. WTH? Mitch was nothing but a tag-along character. This should have been name Azarov Adventure #1! We spent most of the book the the Russian G. Azarov from the previous novel.

I did not want to follow Azarov. I wanted more Mitch.

This was a fine action story but it was NOT a Mitch Rapp novel.

Since Vince Flynn died and Kyle Mills has taken over the reins of the Rapp novels, they have progressively gotten further and further away from Mitch and have become just another group of action/adventure novels.

I'm not only disappointed, I'm angry that the legacy of Vince Flynn has gotten so tarnished

EXCELLENT addition to the series...

To start with, as much as I love listening to Scott Brick I am so glad that George Guidall narrated this new Mitch Rapp book. After so many books Guidall has become the voice of Rapp.
I will not go into details about the plot because I think the publisher's summary gives enough and this book is too good for me to spoil it by giving away any more.
There is quite a bit of action and globetrotting from end to end. This well thought out plot revolves mainly around Mitch and Grisha Azarov (whose home is attacked on the order of the Russian president). Azarov's girlfriend is injured and he can't understand why Russian Pres. Krupin would come after him at this point. Scott, Irene and Claudia all make an appearance but only play a small part in this book.
Kyle Mills does a phenomenal job walking in the footsteps of Vince Flynn, I imagine that's no easy task. If I didn't know better I wouldn't be able to tell the difference between the before and after books.
This book makes an excellent addition to the series and has my HIGHEST RECOMMENDATIONS.
If you found this review helpful please indicate so.
Thank You.

Thank you very much for bringing back George Guidall as the narrator. For me, Brick did not translate for The Rapp series. I hope Guidall returns for the next installment.

Whose idea was it to have Mitch and Claudia become a couple. She planned the attack against Mitch that resulted in the deaths of his wife and unborn child. As far as I am concerned she will always be in the enemy camp. There is no prettying up her character to make her palatable as a love interest for MR. NEVER!!!!!
Still a MR fan, though. Bring back the tried and true formula we the loyal readers have loved for years.
GG is the perfect narrator........ALWAYS.
Kyle Mills has done good work in the past,but this time has strayed too far from what I expected in a Mitch Rapp book.
Just my opinion..........

Worst Rapp book of all.

This was the worst Mitch Rapp book of all. Seems like it was written on auto pilot. None of the Mitch Rapp action that I'm used to and expected. Very disappointed.

Pivoting back to cold war comrades

Red War by Vince Flynn / Kyle Mills is the latest Mitch Rapp installment. This time out Russia is making threatening noises. It's president has been diagnosed with a terminal disease and the gloves come off as there appears to be no long term interest, while short term interest remains merely staying in power. With all outward intentions looking like a play for the Ukraine, Mitch assesses the true strategy lies elsewhere. Action jumps around as Mitch tries to be everywhere at once.

Rapp seems to be losing his bearings as the shift from Flynn to Mills is transitioning. The Russian president with brain cancer is a bit over the top. Russia seems schizophrenic with a nostalgic affection for Soviet era dominance, while issues jump back and forth between maintaining internal control versus acquiring more land and disrupting NATO. The military action scenes are overdone and the description of submarine warfare is way beyond reasonable for this scenario.

The narration as typical of the Rapp series is superb with that gravelly delivery. Character distinction is excellent and pacing is perfect for the flow of the plot.

What a terrible disappointment this was! I, like so many other purchasers, was hoping for some classic Mitch Rap as he outsmarts, out maneuvers, and kicks very serious bad-guy butt as the primary storyline.
NOT! This book was an amateurish try at international intrigue based on a silly premise that was the “star” of the story.
I really loved the Mitch Rap books. This is an affront to the franchise.

Kyle Mills is straying from the Vince Flynn writing style. Book was very bland/serious. Vince made the plots fun to follow, this was just boring. Definitely not enough of Mitch’s character in the book, it was all just Russian drudgery.

Red War is a new look for Rapp

While Rapp is paying back Grisha Azarov, Russian president Krupin’s former enforcer and one of the very few men that have gone toe-to-toe with Rapp and lived to tell the tell. CIA Director Irene Kennedy hears that Krupin has brought out of forced retirement general Sokolov making him his top aide and advisor. This gives a head fake to the world's Intel agencies making them at first thinking he is there to help with the pressure from the public protests.

Krupin makes moves to invade NATO countries at the same time daring the Americans to get involved. Kennedy learns of Krupin’s inoperable brain cancer, she realizes that they are in a no-win situation that could lead to nuclear war.
This is Rapp most dangerous mission to date can he stop Krupin before he and Sokolo can start world war three? With a lot of action from the start that keeps going all the way through and great storyline this is a five star book!

A Giant Plus for us Audiobook listeners George Guidall is back reading it!

Mitch Rapp was dead for me after the fiasco with the last narration. I'm giving him another chance now.