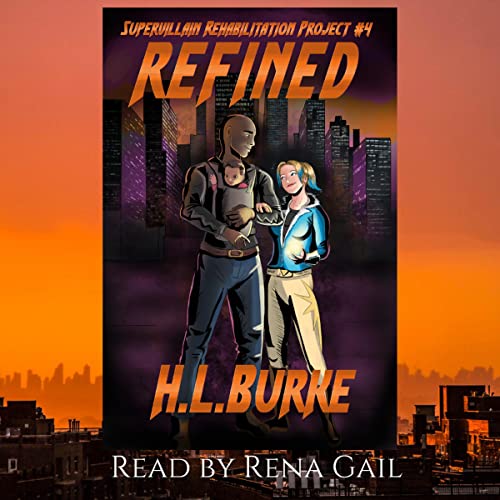 It’s hard to be a hero when crime is in your DNA.

Now a full-time hero with a beloved wife and treasured daughter, former supervillain Fade is certain nothing could take him down a dark path again. However, a mystery from his past lies in wait - a mystery tied to a part of his life he’d rather forget.

When DNA evidence reveals that Fade’s biological father is the elusive and enigmatic assassin known only as Syphon, Fade wants nothing to do with that mess. Unfortunately, Fade can’t shake the target that this newly discovered connection puts on him and on the backs of his friends and family.

Fade's only chance to fix things is taking down Syphon himself. But Fade’s long absent father has his own plans for their reunion. Plans that could cost Fade everything he’s fought and bled to create.

What listeners say about Refined

Refined is the fourth book in H.L. Burke's Supervillain Rehabilitation series. I recommend reading these in order.

If you've read any of the previous books in this series, then why are you reading reviews.

if you haven't read any of the previous books, go back and do that now.

Once again Rena Gail bring her own superpower to this performance. The Characters come to life as she reads. She gives unique voices and attitudes to each one and infuses them with emotions.